Where to put element controls?

I have the following:

I think it's less than ideal because the edit/delete buttons are requiring me to waste a bunch of vertical whitespace within the element.

Options that I can think of:

Where to these controls belong when the space within the element is so valuable?

Why not place an edit tab at the bottom and then display the edit/delete buttons when it expands up? Users will be entering their code from the top and this tab will not interfere with the content since it will always be on the same line as the next line of code. The bottom line of the visible area will always be blank since the content will shift up... 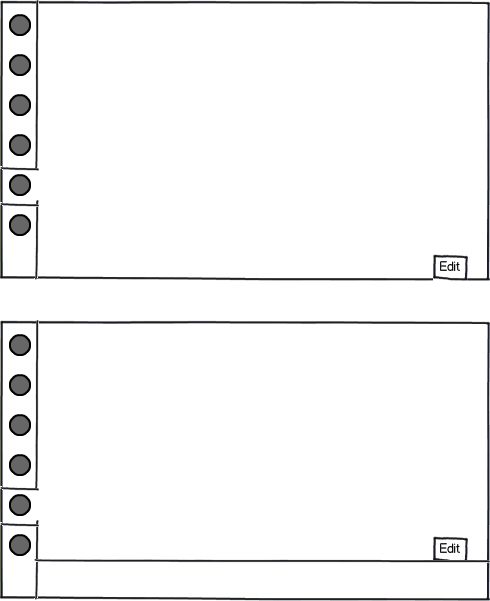 I could be totally misunderstanding your question though.

Not the answer you're looking for? Browse other questions tagged usability interaction-design navigation controls or ask your own question.

4
Where to place optimization controls in a scheduling interface with several vehicles and optimization criteria?
4
Controls on moving controls?
3
iPad full screen in landscape mode - which side to put on my controls panel?
4
Improving the "request seat" page for taxi sharing application
2
How worried should I be about action consistency across multiple pages?
4
Does A Slider Control UI Element Like This Exist -- The Joystick Slider?
0
Is it okay to have several lines of summary information inside a tab label?
0
Guiding users through updating generated content
4
How to ask users to confirm/verify customer contact details