A taxi sharing application that I'm working on as part of a university project has a "request seat" option. I've spent the afternoon working on the interface (arguably the most important UI element of the app), but I have the feeling that what I have produced so far is clunky and leaves a lot to be desired for. 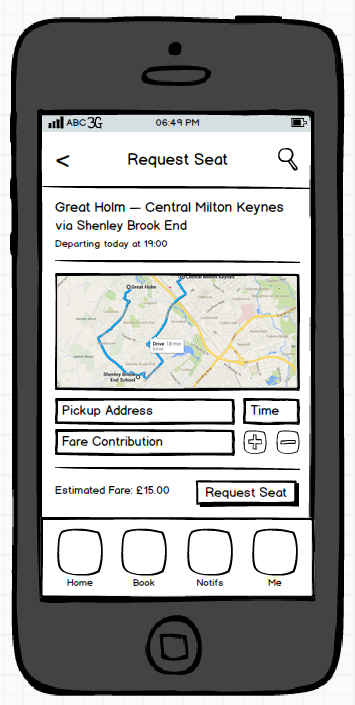 The top section of the screen shows the current journey that the user would be requesting the seat for, and any pickups (via) that will be made.

The middle section of the screen shows the route being taken.

The bottom section allows the user to enter a pickup address (no destination address is taken because it is implied that the user requesting a seat on the journey is going to the same place), specify a pickup time (once again within a predefined range) and specify their fare contribution (using the +/-). As the user enters their address, the estimated fare value is updated along with the map in real-time.

The top/middle section of the screen seem alright, but the bottom section can be simplified. Hence, I have the following UI-related questions: 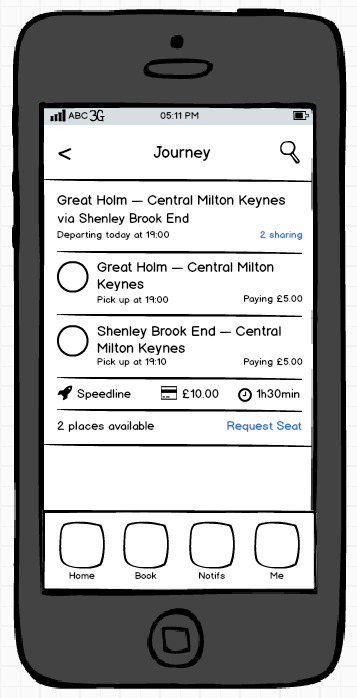 It seams to me as though two thought pop out immediately:

+/- buttons Basically I think you are asking the wrong question for this one. You have phrased it rather like you are not sure if you should allow the user to pick the fare or not; I think that is a separate - entirely business related decision to make.

I do think that the +/- buttons are a bit vague, you need to explain this better; why are they able to change the fare? Most users will be used to seeing a set fare. Also below this you have "Estimated Fare - surely this is the same as what I have just changed? I am sure it is clear to you, but it is a little confusing to fresh eyes!

As for the UI I think you have duplicated some information, or split it perhaps a little bit unevenly. On the first screen you have two separate addresses, try bring these together, or if they are the same address, scrap one.

Map UX With regards to the map; I would scrap it. This isn't because for the purpose of the UI but rather speed, your users could be in rural areas (or indeed driving around the million roundabouts that are in Milton Keynes :]) and thus need the screen to load with the minimum data requirement for the best speed. Thus I think having the map here could cause a lag and that would be very bad.

As for your actual question I would lay out the UI a bit more like this (sorry for the crude Photoshop-ing) and I know it is different that is just my experience in simplifying things giving better results. Overall it looks good though your plans seam to be fairly well thought out so best of luck in your project! 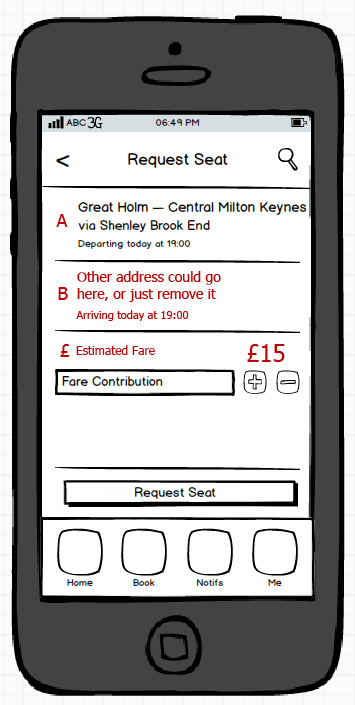 Not the answer you're looking for? Browse other questions tagged gui-design interaction-design ios input-fields mobile-application or ask your own question.

0
What would be the best way of combining these two UIs?
3
Improving the “booking page” for a taxi booking mobile application
1
How can I make this step by step booking process more seamless?
0
Is the following phrase appropriate for my notifications screen?
0
How do you deal with notifications that cause changes to a situation or require a response
0
Is this notification page for my taxi-booking/sharing app clear enough?
4
How to avoid a too cluttered UI on mobile devices?
0
Improving the process flow and increasing the clarity of my mobile app