Single and Multi-Select Up & Down Arrow Locations

I'm currently working on a interface that allows the user to order elements within in a box by using two arrows(up/down). Having designed and implemented controls of this nature in the past(some allowing for multi-select movement), I'm of the opinion that the location of the two arrows should at the top and the bottom of the relevant list box(Proposal 1).

Others, believe that the interface should be designed such that the arrow are connected and centered against the window(Proposal 2)

While googling around, I've found that still others have proposed interfaces where the icons are connected but aligned to the top of the box, such as(Proposal 3)

Much of this may simply be a matter of opinion, as there are many designs already present on the internet with different layouts. However, I would like to know if there exists a standard in the way that these things are created and if so where are they currently being used, is there any "large"(1,000,000+ users) website that has already tackled this question? Maybe this design is outdated and has already been solved by tackling the problem in other way such as drag and drop, or incorporating the up down buttons inside each item, etc... I think the question still is a valid one though as I've created this sort of design for older platforms that do not have all of the flexibility given in HTML, and many of the alternate ways of accomplishing this functionality depend on modern UI language(such as HTML or WPF)

@MichaelLai has pointed out quite correctly that the decision where to place the arrows or even to place arrows at all is very broad and can depend on the design of the application rather than having a go-to default standard or rule.

I think for this question I should clarify that I'm looking for the best location/orientation of the arrows, rather than some other design including drag and drop or arrows within each item. I have designed such systems in the past and they work well for the products they were used in but I think for this specific question I would like to limit the possible answers to only ones that preserve the basic elements of the proposals(two buttons, and separate window). My hope is that independent of the specific page(or application) I can determine a standard set of rules to determine where I place my arrow icons(if this is even possible).

Well, I'd go with your 3rd option, only that on the right. Since most people is right handed, that will prevent your users have to go across your element every time they want to interact with it. And having your buttons close together requires minimum effort to scroll up and down. 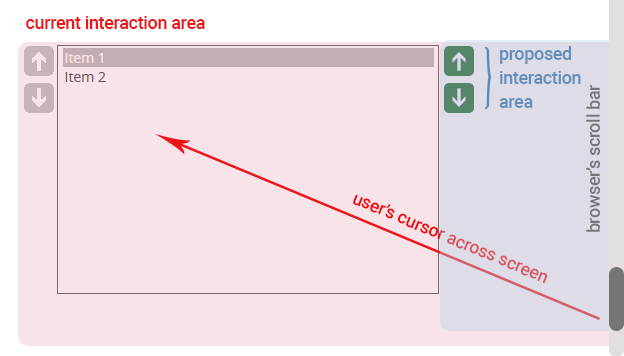 If you need more information on similar subjects, you should take a look to Fitt's Law which explains this concept more in depth

You should realize that there might be very specific reasons why those arrows are placed where they are on the screen, and those reasons might not fit with your purpose.

The other thing is that without a sensible scale or idea of the number of items and the exact frequency and context of usage, it will be hard to determine what the optimal option might be (and this could also change as the application adds more functions and features).

You also have to consider all the other UI elements that surround this particular component, and all the other design patterns and UI components you are going to be using, and whether this design decision has any flow on impact.

Lastly, you could also explore the option where the arrows could be created alongside the individual items, which is actually a common strategy as well if there are a lot of items spread across a large screen and users have to move the items frequently.

Not the answer you're looking for? Browse other questions tagged usability gui-design user-expectation html controls or ask your own question.

6
Pros/Cons of customized/reproduced HTML elements
0
mobile html5 input type="x" vs custom mobile controls
18
Why does the caps lock key have a down arrow as its icon?
3
Ordered Multi-select control in HTML
4
The Name of a Full-size Device-independent Start View with tagline only content and downward pointing arrow to access the site?
1
Example SUS scores / proof of outcome?
2
Select duration using numeric input + menu of units, or a single slider?
1
Undefined behaviour in response to unusual action
1
Can I replace those arrow icons with some other controls
3
How do you approach orientation in iOS and Android?