Why does the caps lock key have a down arrow as its icon?

The caps lock key has a downwards arrow like this as its icon on most keyboards: 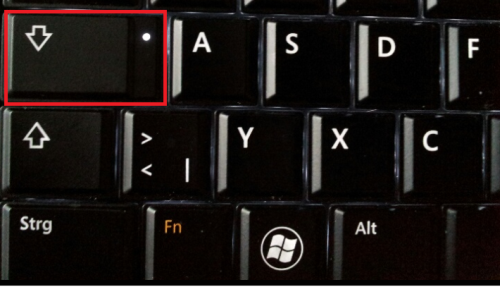 Isn't that hugely counter intuitive and inconsistent with the way the Shift key is designed like? One would imagine that an upwards arrow, probably a filled one would make a lot more sense.

Are there historical reasons for this design?

Wikipedia seems to be popular with the information so far... :)

The Caps Lock key is a modified version of the Shift lock key that occupies the same position on the keyboards of mechanical typewriters. An early innovation in mechanical typewriters was the introduction of a second character on each typebar, thereby doubling the number of characters that could be typed, using the same number of keys. The second character was positioned above the first on the face of each typebar, and the shift key caused the entire type apparatus to move, physically shifting the positioning of the typebars relative to the ink ribbon. Just as in modern computer keyboards, the shifted position was used to produce capitals and secondary characters.

Because the shift key mechanism on a mechanical typewriter requires more force to operate and is usually operated by the little finger on the left hand, it was difficult to hold the shift down for more than two or three consecutive strokes, therefore the introduction of the Shift lock key also helped out people with disabilities who could not hold down more than one key at a time. The Shift lock key was introduced so the shift operation could be maintained indefinitely without continuous effort. It mechanically locked the typebars in the shifted position, causing the upper character to be typed upon pressing any key.

A version of Caps Lock that behaves like a traditional Shift lock does exist on certain layouts such as the French AZERTY. Some operating systems and window managers allow Caps Lock to be used for a similar function. This behavior of the Caps Lock survives, however, in German and Austrian QWERTZ keyboards.

So I tend to agree with one of the comments on the question, that the down arrow is indicative of the holding down of the shift key, as has historically been the method to obtain capitals.

It may be related to QWERTZ keyboard layouts. http://en.wikipedia.org/wiki/QWERTZ

And you probably see it on most keyboards because you live/work in a country (Germany, Austria, etal) that uses the QWERTZ keyboard layout. See the orange countries in this pic. http://upload.wikimedia.org/wikipedia/commons/7/7b/Latin_keyboard_layouts_by_country_in_Europe_map.PNG

I can't answer why this is done but it may help answer why you see it a lot.

It does looks like the keyboard in your pic is a QWERTZ keyboard because there is a Y where the Z should be. Also Ctrl is translated to Strg

While it is probably not overly relevant, on a mechanical typewriter the shift lock key tilts slightly down and in direction of the typist to lock. Given its small size (it is smaller than the regular shift key) and the considerable mechanical force one has to employ with one's pinky (and the typical pinky inclination one row above the usual shift row), one would glance off the shift lock easier if the key tilted away from the typist.

Now the German mechanical typewriters I knew did not bother labelling either shift or shift lock, and I have no idea when doing so was popular. So I cannot vouch whether the mechanical tilting action was ever in place at a time where the arrows were being used.

Another possible consideration is that shift and shift lock worked as opposites: the only way to release a shift lock action was to type the shift key itself, not (as it is customary with keyboards nowadays) the shift lock key again: that would not have accomplished anything.

As others have mentioned, the downward arrow seems to be a particularity of German and Austrian QWERTZ keyboards.

There is a standard for depicting the function keys on a keyboard, part of ISO/IEC 9995. You'll see there are two possible symbols for Caps Lock, both of which point upward.

The standard considers the different types of Shift and Caps lock and provides symbols for them.

(Note: These symbols render quite small on my computer. You may need to enlarge your font size to see them well, or see page 14 of the standard to view them in large type. PDF In English and French.)

I can't say how ubiquitous the application of this standard is. Anectodally I can report that it is applied inconsistently in Quebec, where the standard symbols seems to originate from.

Unicode gives another symbol (U+21EA), similar in style, which is also upward pointing and that has as comments "caps lock". I've seen this used on keyboards before as well.

The Down Icon (which comes from typewriters, most of the keyboard does (redesign please!)) represents the shift key being held down.

Not the answer you're looking for? Browse other questions tagged interface user-expectation keyboard consistency intuition or ask your own question.

6
Are there any studies which investigate the usage of Caps-Lock?
17
Why is the caps lock key often so big on a keyboard?
11
Why do keyboard keys have (most) letters in top left corner?
7
Why do some keyboards extend the Return key up into the backslash?
8
Why Greek letter mu (μ) on European keyboards?
74
Why does the Caps Lock not toggle upper and lower case for selected text?
80
Why do modern keyboards have Scroll Lock?
7
Why warn about caps lock for passwords, instead of ignoring caps lock for password characters?
1
Why does the numpad have arrows?