Representing a change in data collection

I am working on a product that outputs data visualizations based of the responses people give on a survey. Users are then able to filter this output in many different ways (ie: date) This data can then be compared and ranked to find insights. Recently, the methodology in how some questions are asked on the survey has changed (to improve them) and more attributes have been added. I have been told that these new attributes and any data using a different methodology on the survey can't be displayed together with the older survey data. This is really putting a cramp in things as the whole point of the product is having easy visual representations of these responses that users can then compare.

I am having a hard time representing this to users in an easy way. It is also hard because really I wouldn't like to put this kind of limitations on the data, yet am sort of having to emphasize it anyway.

The solution I have come up with for now is to add a toggle of sorts. The toggle will be defaulted in the "off" position which is the mixed data [2016 data only, 2016 data mixed with SOME 2017- data]. Users can then switch the toggle on to see the [ALL 2017-] data. In a way, it is just a quick and overarching date setting. On the images I've included, 1 is the basic idea of the interface with two groups at the top that can be interacted with to populate/edit them, and the corresponding visualizations below. #2 is showing my idea of putting some sort of toggle near these groups.

I would love some feedback on this, any suggestions, or anything similar you have encountered. 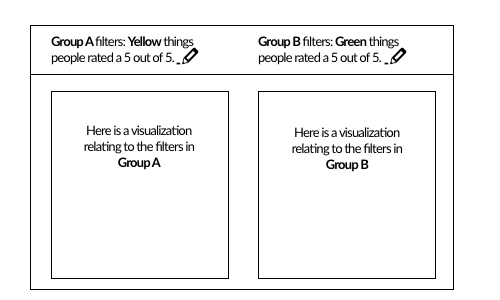 Be explicit and have users select from the data sets you've outlined in your question.

If users aren't sure of the methodology you're using, they may not trust the integrity of the data. Give them an info tip or popover and ideally a fuller explanation of the differences should they want one.

A toggle represents a state change between 2 states, but it sounds like you have 3 data sets (do I have this right?):

The toggle doesn't account for all three, and might be hard to notice. It also doesn't tell me what 'new' data means, and if you update again, then there's potentially more sets to choose from.

Have a selection control that states the name of the set. Provide a way for explaining the differences. 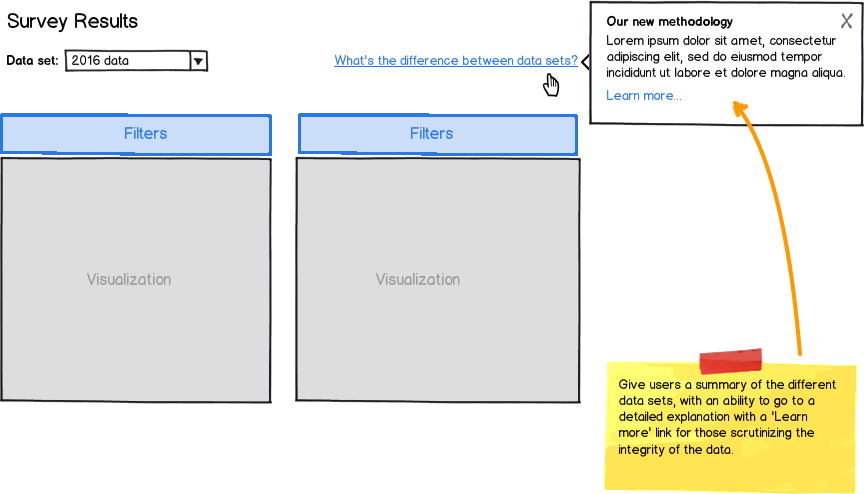 In your solution, you're restricting users on a specific toggle. Think, just after few years, you will have huge amount of data and year range. Toggle feature will definitely not work for huge range.

-Fetch the data on the basis of selection but allow him to change the set any time. (user has more control)

Not the answer you're looking for? Browse other questions tagged search info-visualisation information-architecture filter or ask your own question.

0
What should be the default view of a large collection of data (that can be filtered) on a web page?
8
A graph for displaying numerical data like age
2
Should an applied filter involve a data refresh?
13
How to accomodate and/or with brackets in field filtering system
8
Advanced search / save as filter
0
Better way to compare two data sets visually on a page?
1
Feedback on how to compare two groups of data visually on one page?
3
What's the best way to label weekly periods?
1
Nested search filters
3
How to deal with unknown values when filtering items