Is this mobile slide menu user-friendly?

I am creating a Learn Norwegian language app for both iOS and Android. The app consists of 4 chapters, each chapter has a sub category, for example, Pronunciation, Exercise, Grammar etc.

My problem is the sliding menu's sub-menu. I'm not sure if I've used it in the correct way. 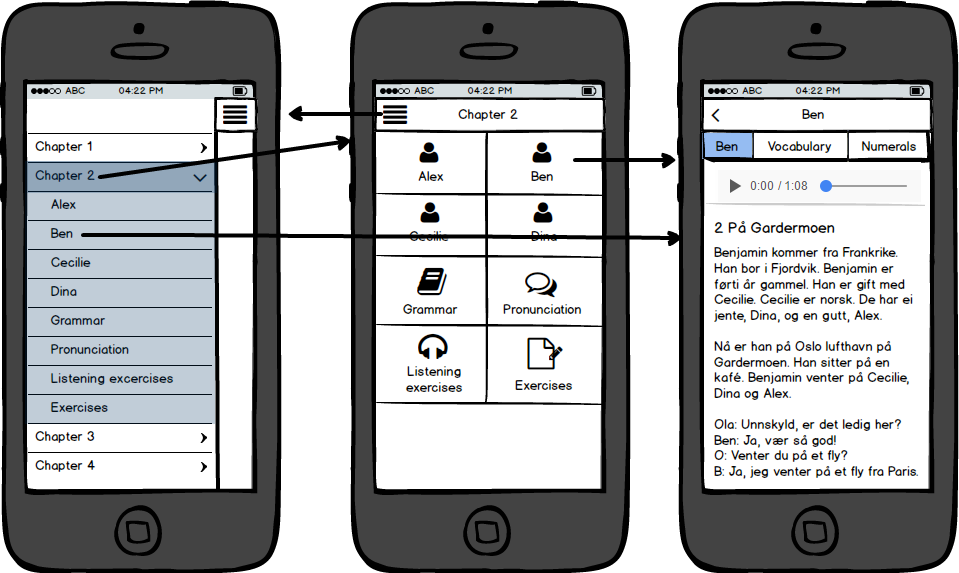 On the main menu you have chapters 1 - 4. When i click on chapter 2's arrow, you get the sub-menu. You can select items from the sub-menu; if I click Ben I will go directly to the Ben page.

On the main sliding menu, when i click on Chapter 2 (not the arrow) I should go to chapter 2's Home page. Is this part correct?

I would like my app to be user friendly and I am worried that it might be confusing to the user. Is this the correct way to do this?

Any advice or suggestions would be appreciated. Thanks in advance.

You're using two patterns in your design. The main menu uses the navigation drawer pattern and the sub-menu uses the accordion menu pattern. I've only seen one application on my Android phone which combines these patterns so I'm guessing that this design is uncommon. 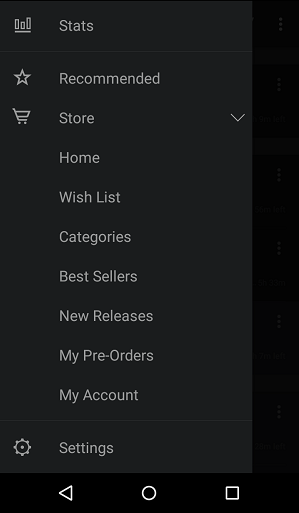 On the main sliding menu, when i click on Chapter 2 (not the arrow) I should go to chapter 2's Home page.

This isn't typical behaviour for an accordion menu. Accordion headers are used to expand and collapse content only. They are not used to link to content. Additionally, users who are familiar with the Navigation drawer pattern will expect the entire menu item to be a single touch target. Having a separate touch target for the arrow icon will not be intuitive in my opinion.

Additionally, having the sub-menu in your main menu and a home page for each chapter means you have duplicated your navigation. I would consider removing the accordion and using the grid of sub-categories on the Chapter home page for navigation. In this way, your use of the Navigation drawer would be more aligned with what user's already expect.

I've seen this design before, so you're in pretty standard territory. Google's Material Design has a section on navigation drawers and I just opened an app on my phone that does it exactly the way you've designed it.

However, I have to say, I'm not a huge fan of navigation drawers on mobile that are only accessible from a single location.

My concern is that the navigation between the three views is inconsistent. The navigation panel takes up the whole screen, and it doesn't "overlay" on anything but the chapter selection. You can't access this menu from the last pane, without passing through the previous pane.

Without ever seeing the material design guidelines I'd suggest something a bit more consistent to move between the three views:

Going left takes you 'higher' in the hierarchy, going right further down. This might get confused with going to Chapter 1 from Chapter 2 (which I'd expect the user would want to do) so if there's an obvious way (drop downs) of doing that it would be less confusing.

Depends on whether you want to follow the material design guidelines or not.

Regarding the sub menu items, (after some confusion on my part) the other poster is correct in that, with material design, its discouraged to have sub-menu items in the navigation draw - unless on desktop:

When you have multiple levels of navigation, sibling views should be nested underneath their parent.

On desktop, a secondary level of navigation may be nested within the navigation drawer.

Appropriate for these hierarchies:

Lateral navigationParents with siblings or peers

Does that mean you shouldn't do it? Not necessarily. Worth doing both and trying it out. It might be a little confusing to be able to cut straight to the chapter (and if that's the case, why have the 'middle' section at all? How many times is a user going to just click on the chapter rather than named sections? Does it provide any more information?)

Not the answer you're looking for? Browse other questions tagged android user-expectation ios mobile-application human-interface-guideline or ask your own question.

6
Using a TabBar with slide out side menu?
0
Why is 'Up Navigation' a recommended Android guideline?
2
Horizontal Scroll Web App
3
Best way to subtract score on Android when a tap adds score?
4
Top-down hamburger menu / is it a cool experience regarding my application?
1
Android- Navigation Drawer with sub-menu
4
How to provide two options for items in a list, with accessibility for blind users?
3
Testing Filtering Functionality inside a map based native mobile App
1
Arabic, user friendly mobile menu - iOS
0
iOS user friendly, mobile menu