How to provide two options for items in a list, with accessibility for blind users?

I'm developing an Audio book player app for mobile. This app is mostly focused on blind people, so the UI must be comfortable in accessibility mode. For an open book, it shows a list of it's chapters.

I want to provide two options for the chapters:

What is the best way of providing these two options?

I have these in mind:

But I'm not sure which is the best, or if there's another more elegant way.

If it is mainly for blind people, then the only important thing about the structure of the elements is their order. Accessibility features, such as Android TalkBack, make the focus jump from one element to another on left/right swipes.

What you should not do though, is use some fancy interaction styles and animations, like some answers here suggested (e.g. making buttons slide in from the side). Those make it really hard for blind people to actually understand what is happening and might also mess with the readng order of the screenreader.
The paper Usable Gestures for Blind People: Understanding Preference and Performance shows a lot of research on this and provides guidelines on how to design smartphone applications for blind people.

So I suggest you use your first idea and simply place two buttons in each row.

But fully blind people are much rarer than visually impaired people, who still have some residual vision left. So with a correct design you could provide them with a "shortcut", instead of making them go trough all of the elements with the screenreader first.

Things that help these users interact with your app are:

How about slide left and right to show extra buttons? Like in Google Inbox. Or better yet, like Zoho mail. Here is a screenshot. Downside: you need to at least educate them once during onboarding, but the idea is picking up, it won't need education soon. 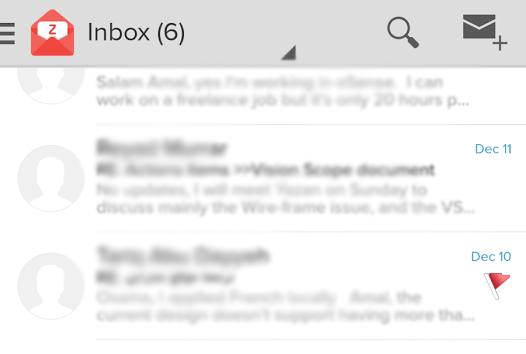 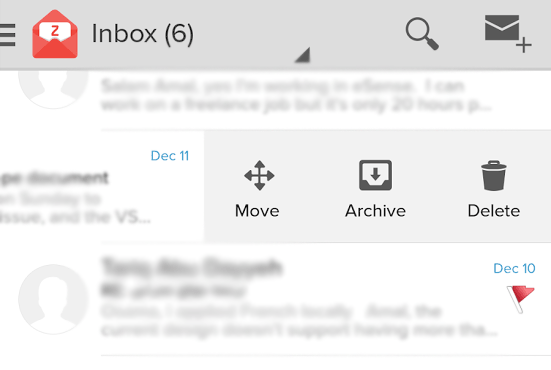 I would say you should play the demo on touch enter event and stop when he enters another chapter by sliding his finger.

If he releases (on touch end) there are 3 cases:

The good thing about this approach is that you can freely and easily skim through the book with only one touch and once you settle on something you just release and go.

I think putting two buttons on each row might be a good approach, you give them the option on the 1st level which is pretty straight forward. The only issue I see is it might cause clutter, if you have limit of room to add buttons. Icon type button might help.

Opening a popup menu in click is good too but it require an addition click, if they are just browsing around, it will become bothersome.

Not the answer you're looking for? Browse other questions tagged gui-design mobile android accessibility mobile-application or ask your own question.

2
UI for audio synced with text
3
How to display multiple options for settings page using icons?
3
Can I use tabs to organize content, if the content is halfway down the screen?
2
Intuitive representation of “increase priority”
4
Tab based layout or not?
6
What is the way to show sections (chapters, bookmarks…) in videoplayer for mobile?
2
Is this mobile slide menu user-friendly?
1
Arabic, user friendly mobile menu - iOS
4
Accessibility in computer games, and designing for them
0
How long to keep the UI state of an app, when app is in background? (Android)