Recently, I encountered a dilemma when designing a button on a mobile app.

Here is the case. On the screen where I place the button, the user is required to fill in some information (but not all text fields are mandatory). At the bottom, there are two buttons: send now and send later. As long as the user completes the mandatory fields, Send Later is enabled.

A bit more background information: The app is to help users record real-time readings and send them back. But because the network in the working environment can be very unstable and due to users' job attibutes, they can consciously choose to send the data immediately or send it back later (could because of offline mode or they want to send all data at once). And after the user clicks Send now, they will be led to a screen where they are required to enter their credentials and then their data will be sent. while Send later button doesn't serve "save as draft" function because users cannot edit the data afterwards. And unlike outbox function, the saved items won't be sent automatically since users' credentials are required.

The question is that when the user completes the mandatory fields, I 'm not sure if Send Now button should just be simply disabled under offline mode, or it should be enabled and after the user clicks it, there will be a popup saying "No network available".

To disable the button does make the workflow much simpler, because when offline, the user has to click send later anyway. But keeping the button clickable seems a standard design (so only the mandatory fields control status of a button, but normally there is only one button, for example, Log in).

Here is my answer

Add an "Offline" label to show current status and to tell users why the Send Now button is disabled.

This way you also show that the Send Later is the only available option while offline. 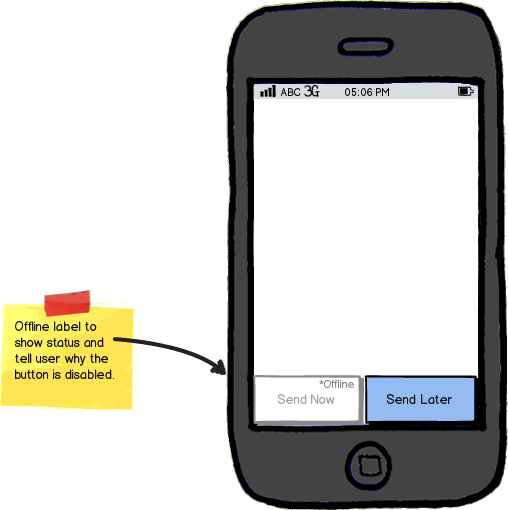 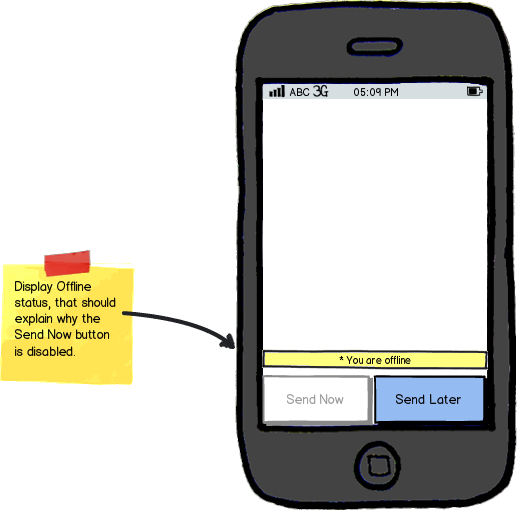 This is one of the option:

Change name of buttons: Rename "Send Now" to "Submit" and "Send Later" to "Save as Draft". This will remove the dilemma with "Send Later" button that when to send? what does later means? In what time?. In this case, what you can do that is on clicking submit in offline mode save it as draft and in flash message tell user "You are offline now. The form is saved as draft. As soon as you go online it will be automatically submitted.". 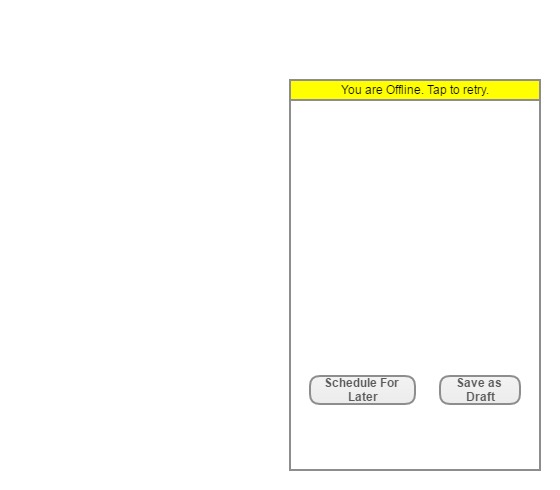 Not the answer you're looking for? Browse other questions tagged android mobile-application enterprise or ask your own question.

1
What should the behavior of Disabled Link/Button be?

6
Best pattern for posting to social networks
2
Approaches on having a sign in, sign up, and guest form in mobile app with as little annoyance as possible
1
Would users understand splitting an Android app's functionality by permission?
2
What kind of feedback is appropriate to inform the user that he's actually offline for a mobile app interface?
0
Help with "haggle/barter" feature on mobile application
1
iOS what's the best practice for letting the user know that I'm sending data to the server?
0
Automatic pop-up (modal window)
2
Auto scrolling between form fields
0
Should reset button also refresh the pre-loaded results in data table along with its selected parameters
2
Should non-existant files in a recently used files list be deleted without user prompt?