Visualization of a resource with multiple competitors

In a game I am working on, the goal is to gather a specific percentage of some limited resource. Additionaly, players can shoot each other, resulting in a permanent loss of some amount of this resource. The game is played in split-screen, meaning that all two to four player cameras are rendered on the same screen. This allows some shared visualization.

My question is how to visualize this element of the game.

How can I achieve a result which can be read fast enough, without having much UI on the player's screens? (it's a fast game, so it has to be some progress bar - not a simple number; and it's only necessary to see "oh, I'm nearly dead" or "hurry up, I only need some tiny amount of resources to win" instead of seeing the difference between 48% done and 53% done)

If all players are viewing a split screen, I would just use a standard progress bar in each player's area of the screen. It's a commonly used convention and people understand it.

The second method is neat, but it could be confusing. The metaphor of "filling something up" applies to progress bars. But does it apply to your second image? The image implies that it would take longer to "fill" as the resource meter approaches the outside of the circle. If that's the case then it would be hard to read as a percent. If it does not take longer to fill as you approach the outside, then the meter is misleading.

Maybe you could use four very small infographics. The bright one is your level. And you only compare yourself to the strongest competitor. If you are the strongest you don't compare. If so you are the best and can relax. And for every player you can use the same position of the HUD. That's fair because otherwise each player has to look in a different position if he wants to check the stats.

I made a little visualization here: http://files.erikscholz.de/images/hud.png (I'm not allowed to upload right now.) 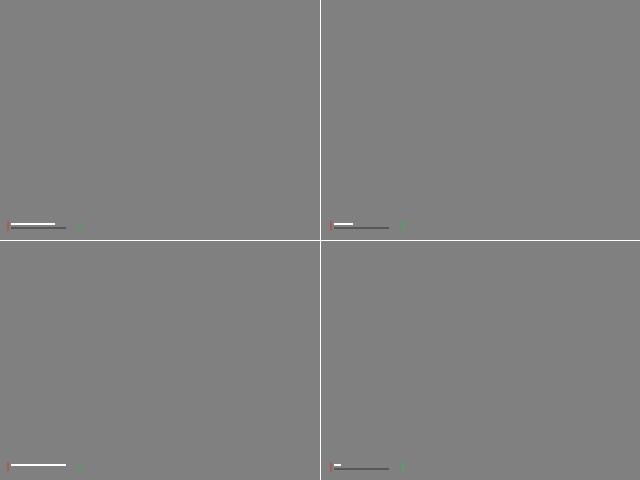 Is there a quantum of resource? In both cases, it seems to me that the actual amount of resource needed is still not clear in either. If the remaining resources are gathered/harvested linearly, it may not reflect the urgency (also note that the circular graph has a nonlinear area problem which could also make it seem like your opponent has more time left than he does). It might in this case be better to count down the resources remaining to goal instead of an increasing bar - the goal bar itself is them irrelevant. This may also help the area problem on the circular version. A lot depends on the granularity of the resource in the game versus the display resolution.

You can also stack all your bars.

Are all players viewing a single split screen?

It would probably be more helpful to show the number of resources currently collected, out of the number set for the goal. Something like "4/20 resources."

You could even have this number inside or next to a progress bar.

I would avoid cluttering the crosshairs, since the player will likely be trying to look through them at the game environment.

Not the answer you're looking for? Browse other questions tagged resources games progress-bar or ask your own question.

2
iPad UI: 2-Player Multi-touch Decisions Affecting Game Play
1
Game UX for hero with upgrade-able collectable boosts
6
Progress bar that allows to understand both current and maximum values
0
Numeric input - alternatives to slider / text field for mobile game?
13
How do you visually represent "progress" on a negative (lower is better) goal?
9
Nested tabs on landscape mobile. Best Practice
3
Progress bar in a multi-page form in an app
3
Local multiplayer, game menu design (Up to 16 people)
1
What is the best way to indicate both the exact and relative remaining portion of a resource in a single element?
1
How can I show the relationship between two progress/health bars?