Hi, I am looking for tips or examples on how to create a menu for a local-multiplayer game.

The game is accessible by joysticks and keyboard, but I am mainly focused on joystick access.

In the menu players can choose their colour.

After they choose their colour the game can be started.

What we've done so far is:

Current solution with tilt works fine with up to 6 people, but there can be 16 slots.

We have tested menu with 15 friends. It is too much chaos and you can not find your slot fast enough by using tilt.

Do you have any suggestions on how to design this menu better? Maybe you know of a game that solved a similar problem? Remember that two players can play the game with one joystick.

I have included information about "key-map" (what keys do what) because I think it might be important.

Only show the current controllers being selected.

Given the large amount of options (up to 16 players on up to 16 different controllers), it is best to only show the active controllers.

There are a few things I'd like to focus on.

See the image below.

The image below is the entry point of your controller selection screen. There are no active controllers, so there is not a list of 16 slots. The only visible elements are: 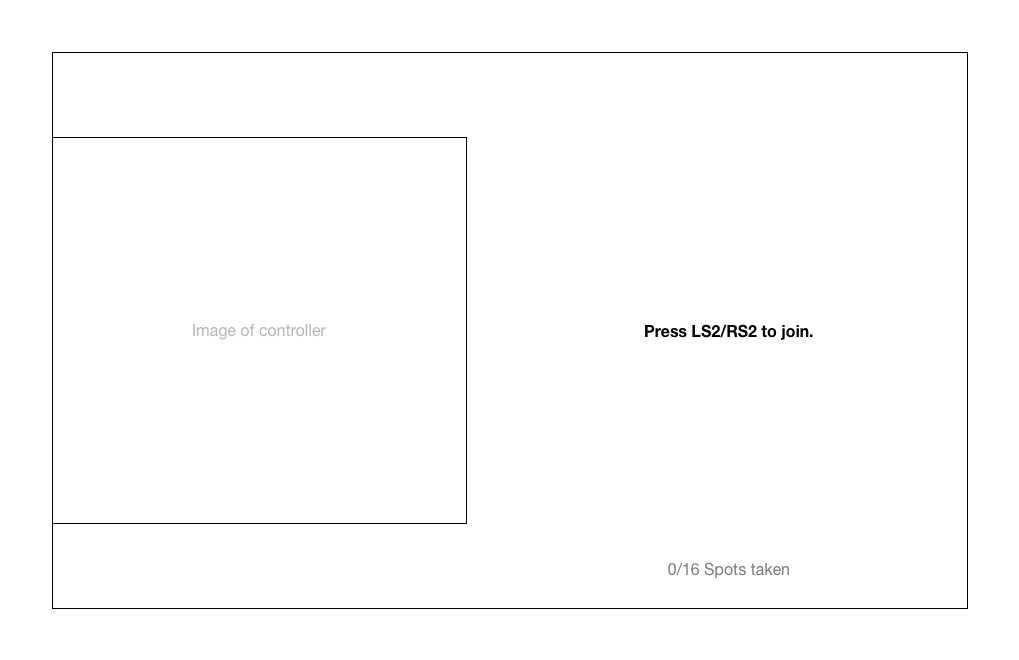 Now, what happens when someone presses a button to join? The flow below shows the three steps of joining the game. At first the player only sees the call-to-action (see image above and flow below). After joining, the user sees the same selection of colours as in your video.

When the user is finished selecting a color, the player box is made smaller and moved to the top of the screen to make room for other players.

The image below shows the above mentioned flow and screen in a larger flow of three screens.

The final images below show a more busy screen of multiple players selecting controllers and colours at the same time.

There are 8 slots in the video, and assuming every two slots is occupied by a single controller, i.e two players in a controller. We have 4 controllers and 8 players.

Now i am not sure about the nature of the game, but we can safely assume the left and right sections of the controller are going to used by two different players (or two different characters controlled by a single player? ).

First off, it will be better if you split the menu in sections. i.e Divide the menu into pairs, in such a way it is intuitive for the user .

For example , if User A with Controller A presses L2 he joins the first section's first slot.

Now if User B with Controller B presses L2 , skip a slot in section A and go to the second section's first slot . i.e slot 3.

In this way , it can be shown that each controller can accommodate 2 players at a given time. Show a info on the First section's second slot , say "Press R2 for Player 2" , so that the User A can know he can bring in another player.

And also as you had said, the tilt can be a problem if many people are there in the party. This can be partially solved by color coding them into distinct sections or naming the controllers in each section (but i guess XBOX controllers dont have controller identification like Dualshock does) and also by providing rumble feedback. This will enable the users to guess which section they have joined.

Also , in the video the space occupied by the joystick layout can be used for other sections for the players, maybe flyout the layout when someone presses and hold a button . 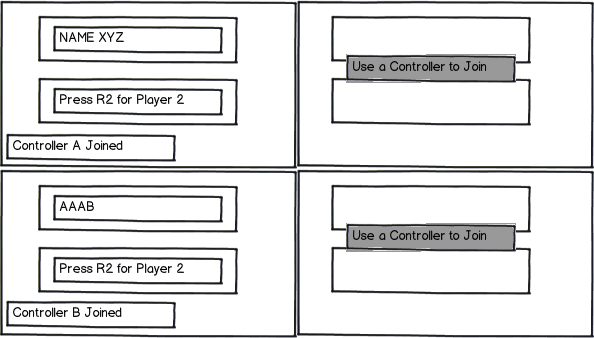 i hope this helps :)

I think the problem lies with 'where user start on the slot selection screen'.

Taking into account the worst-case scenario where 16 players are using 16 or 8 joystick and enter screen at same time. All the 16 player start on the slot selection screen not knowing where then stand. There is no sense of navigation to slot when any user presses keys on controller or keyboard. And hence the so called CHAOS in understanding which slot is with which controller.

Breaking the solution to your problem in 3 steps:

These 3 steps can be easily explained by seeing how other successful local-multiplayer games solve this problem. For example FIFA 13 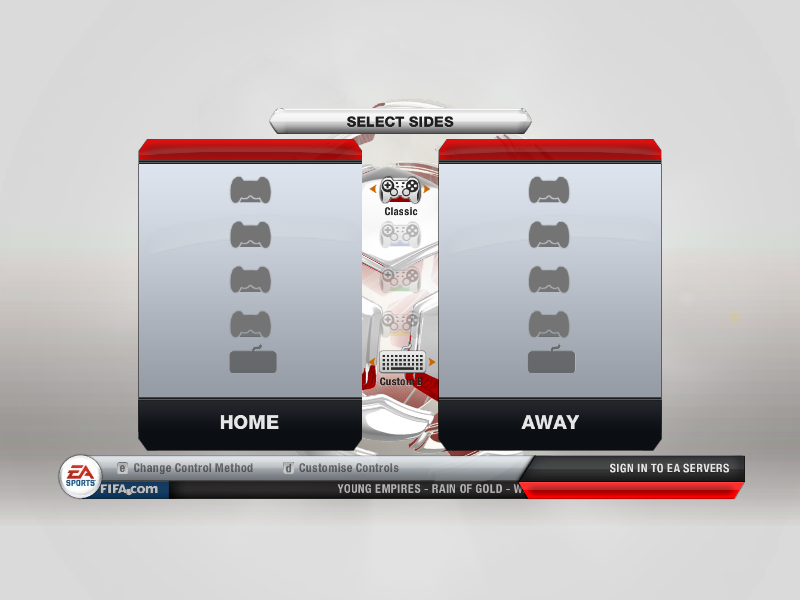 See how controllers are displayed in the middle of the slots. This gives indication to players where the starting line is.

(In above image) In addition to the starting position, the direction in which player has to move is also displayed. 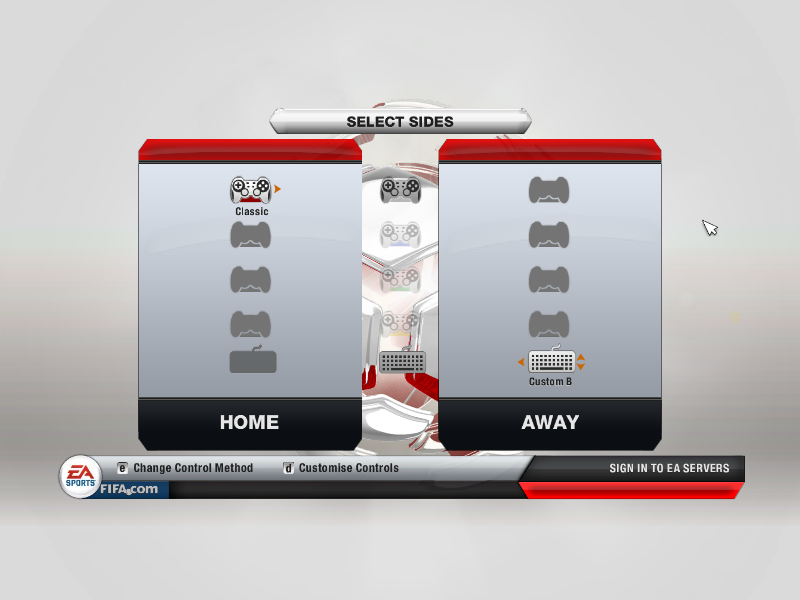 I believe you have covered this pretty well in your current experience. The tilting of slots is a good way to go. In addition to tilting the slots, user would also know which slot is selected or locked when he/she selects a letter on the slot.

p.s: I think in above scenario key-map is very much needed

"We have tested menu with 15 friends. It is too much chaos and you can not find your slot fast enough by using tilt."

so here is a tip:

that will ease usability...

Not the answer you're looking for? Browse other questions tagged gui-design menu selection games player or ask your own question.

2
iPad UI: 2-Player Multi-touch Decisions Affecting Game Play
6
Should I use a radial menu design for a touchscreen game?
0
best way for a multiplayer lobby in a smartphone game
4
Who should be able to pause/restart/quit the game in a turn based game?
6
Why are most game controllers left handed?
1
What ways are there to teach users the rules to a game?
1
What to do if the requirements for an action are suddenly not met anymore?
4
Players don’t realize they can move vertically
4
Accessibility in computer games, and designing for them
1
Video game main menu tab navigation mapping for PC