I've seen a few questions regarding deep hierarchy and miller columns, but haven't seen an example of it with smaller screens (tablets, would be the limit. this is not for phones). I'm not really a UI designer, more of a web developer, just read through a bunch of google material design stuff and like it. I have a project that has a deeply nested structure where jumping back and forth at various levels quickly is needed. I just wanted to get some feedback on this idea. Trying to avoid visual clutter, show breadcrumbs, while maintaining as much space as possible for the "details" of the content.

Questions: Is having this many columns too cluttered? Is collapsing them an an acceptable solution?

Users would need to create/update/delete items at the various levels. At the 3rd level, they would need to perform the same set of actions on a 4th level of items in addition to viewing report type information. Each level has its own set of details. Sorry, i'm trying to be vague but not too vague and i can't think of a good analogy for this scenario.

With 3 columns on a smaller screen it would result in something like this: 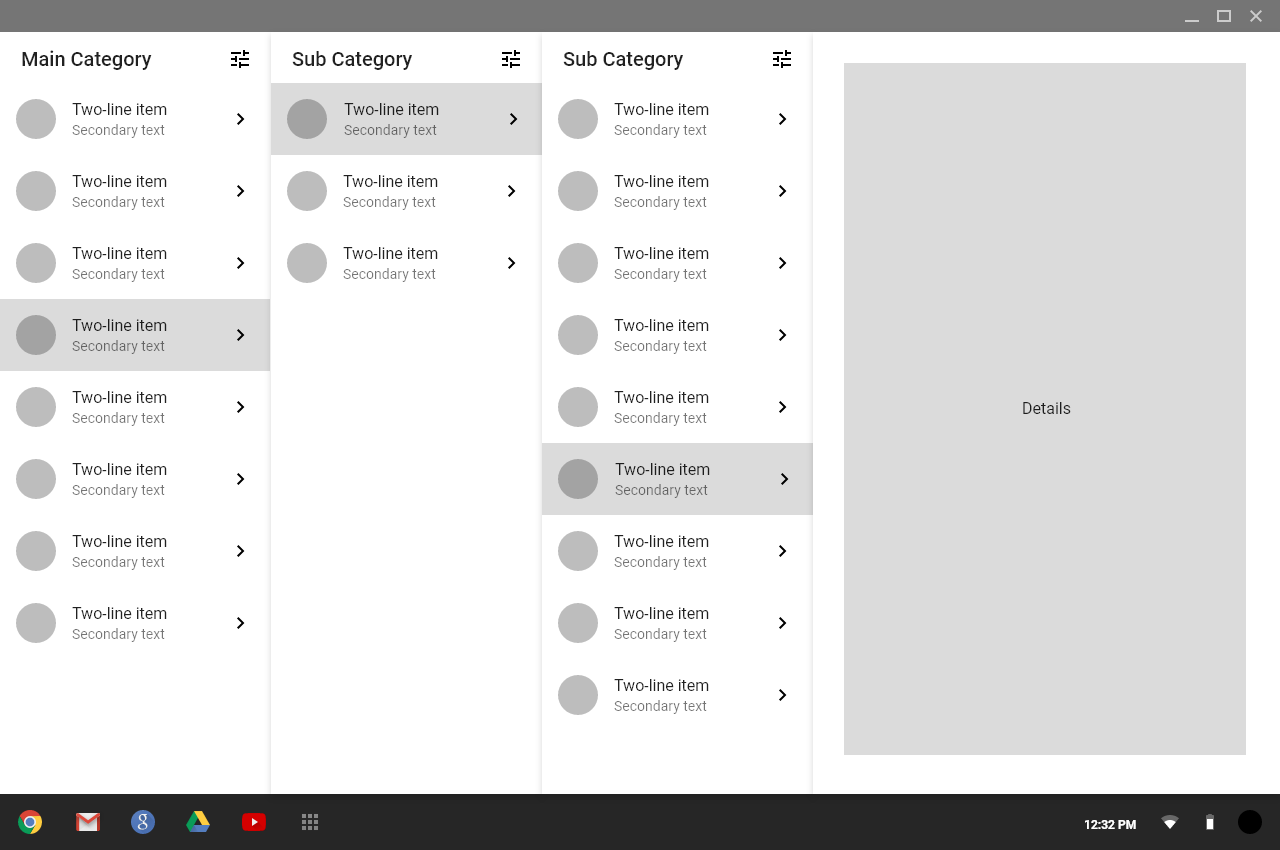 One idea is to completely collapse all columns 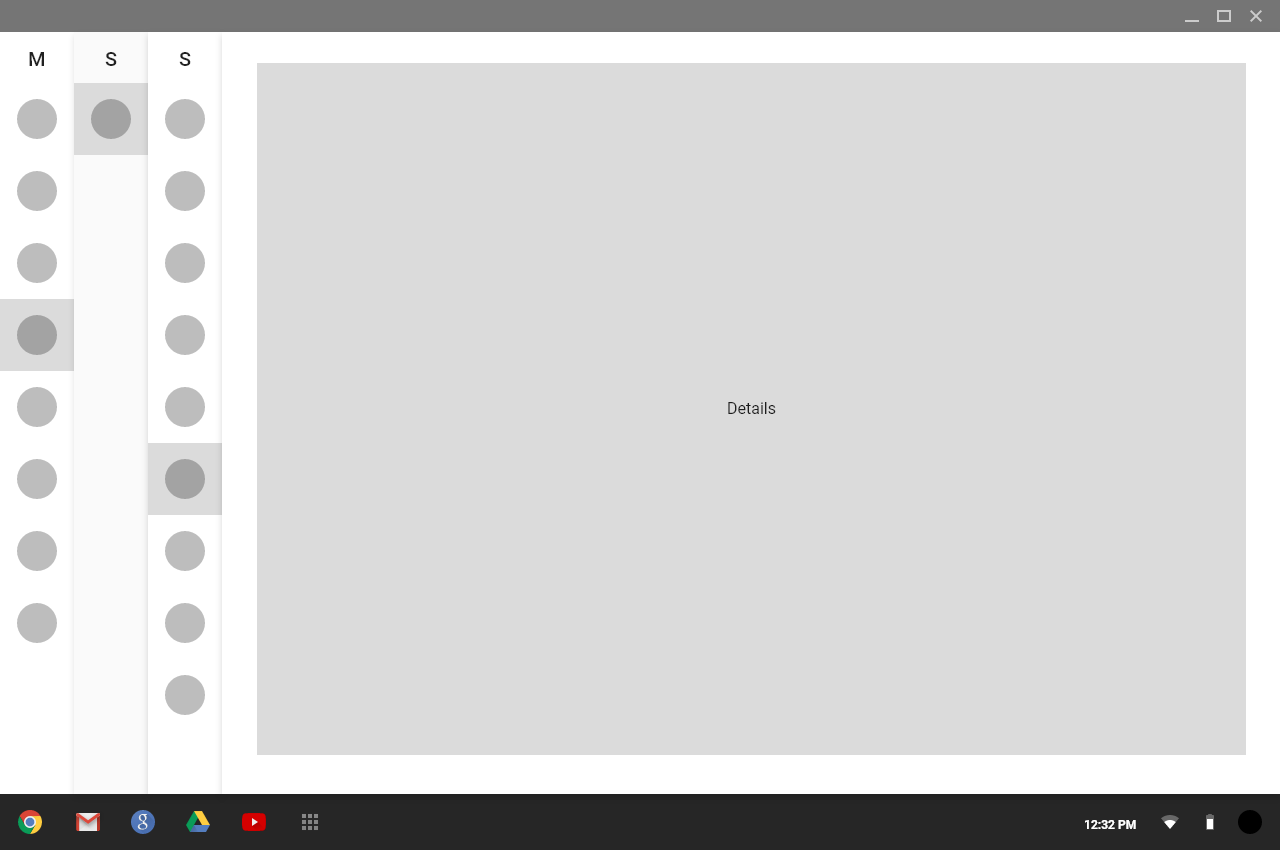 Another is to have it the last column always visible 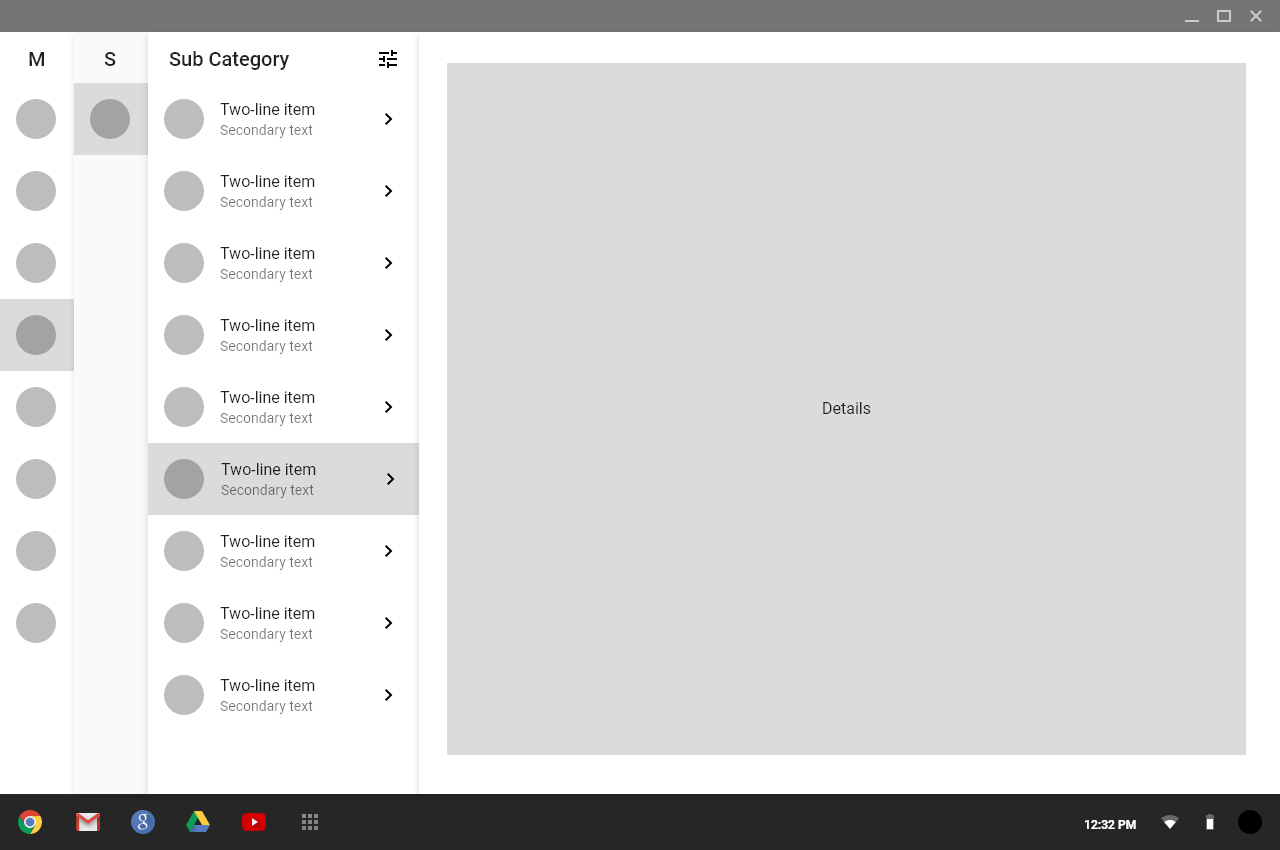 Is having this many columns too cluttered?

Instead of starting with that question, I'd start by asking if users will have enough space to do theirs task comfortably in the "details" space. While you can always assure them that, the clutter is less of an issue.

But I see that you'd need to place 4 columns, besides the details one, so you'll most likely need to "show less" of the columns. Options vary.

Is collapsing them an an acceptable solution?

Start by discarding the one collapsed with only circles. There the context is totally lost, which will for sure "make the users think", something you always like to avoid.

Then I'd ask, is that circle containing any kind of information that is really necessary for the user? Because, cutting it out, will significantly reduce the amount of space needed for each column, maybe enabling to fit them all.

If that's not an option, you'll definitely will have to reduce the amount of items that are shown at once.

If you go the collapsible route, some recommendations:

Other viable alternative could be using at least some components of a tree structure. Here an example of Microsoft OneNote, which you can use as a base and adapt to your use case. 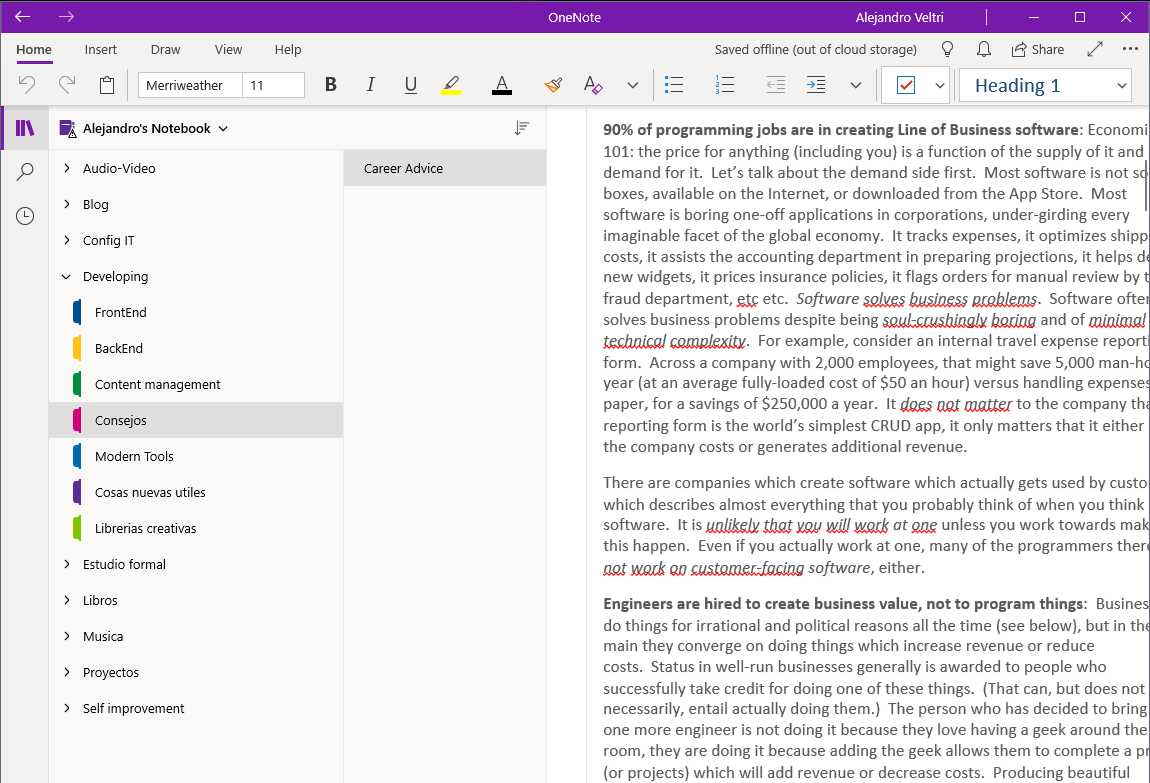 Also another example from windows explorer. You can help yourself with some visual design to improve the visualization of each hierarchy.

As rule of thumb for all cases, I'd try not to occupy more than half the horizontal available space with columns, so users have at least half screen to visualize and interact with the details.

Not the answer you're looking for? Browse other questions tagged navigation navigation-drawer nav or ask your own question.

80
What's the best way to view a deep hierarchy?
4
How to deal with too much navigation
6
Navigating backwards in Miller Columns
6
Mixed classifications in IA -- ever appropriate or effective?
5
Mobile Multi level navigation with "split" button (access to sub-levels)
3
Responsive design - 3-level navigation
4
Use of bread crumbs for hierarchical data?
4
Mobile Application breadcrumb navigation: is it a good idea?
8
Design patterns for switching workspaces on mobile
4
Recommendations for improving tree navigation