Do nested hierarchies of folders make sense to novice users?

I may be wrong, but I think the complexity or difficulty of finding a file in an organized or disorganized arrangement of files depends on the user. I think that all the computer-savvy people have gotten wired with a mental model of files and folder display. (Because I have been using hierarchical folders since I was 14, I wonder if I am too biased and can’t see the real frustration of the common user with the disorganization of files and folders.)

I suppose that established users' expectations of hierarchical folders might be why new cloud services including Dropbox and Google Drive haven’t changed anything about the way they display the files and folders, but I wonder if there was ever any original research showing that the hierarchical folders actually make sense to new users.

Do users feel that the current way of displaying the files and folders all together causes any problems (such as difficulty of searching, finding, managing, organizing or viewing a file or a folder)?

(Since Windows and Mac follow a similar pattern for displaying folders, I thought the research might have already been done so I don't have to repeat it again.) 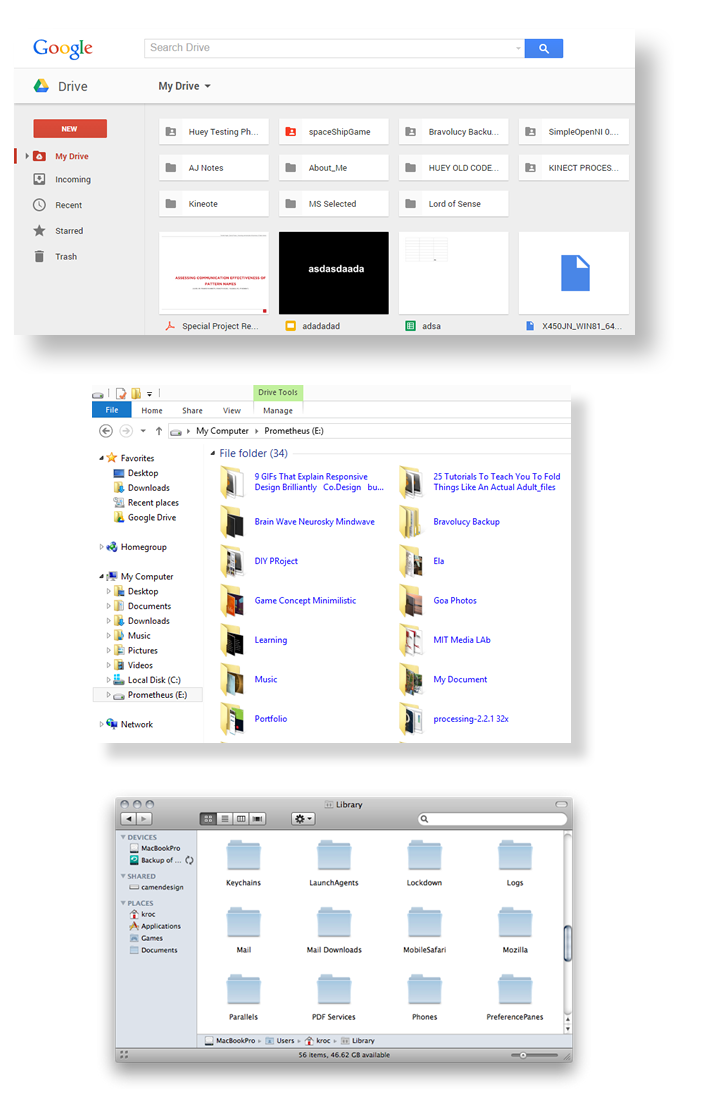 Imagine trying to understand all living organisms without any form of classification. No kingdoms, phylums, classes, orders, families, etc. This one simple example clearly illustrates the importance of grouping things.

Everyone in the world classifies things because doing so makes our lives easier. For example, many people moving from one residence to another will write the name of the room in which the packed items go somewhere on the box. This is one way of classifying things and very similar to putting digital things in a folder.

Most people can handle between 5 to 9 items in memory (7 plus or minus 2) and things start to rapidly break down when going beyond that. I can't remember all 120 movies I have in my collection at home but I can remember there is a folder for Kids Movies, Action / Adventure, Chick Flicks, etc. I also know that Kids Movies are broken down into subcategories Disney Movies, Cartoons, TV Shows, etc.

3. Tagged flat lists and nested folders can be used simultaneously

iPhone users couldn't group apps into folders until iOS 4. Apple listened to users. Google docs didn't allow multiple levels of folders for storing files at first and now they do. People not only understand grouping and sub-grouping their stuff into folders they ask for it when it isn't there.

The visual 'files and folders thing' goes back to the original Apple Mac 'Classic' interface in 1984 ( which in itself was influenced by the Xerox Star interface).

Before that if you used a computer what you got was the command line interface of DOS.

Personally I think the Classic interface was about as easy as it gets: there were things (documents, bits of the operating system) and there were folders to put them in to keep them organised.

of the period (This covers references to the research which basically got us the design of the Mac and then MS Windows, and indeed the entire world of modern devices )

Issues for both novice and expert users:

I would say that nested hierarchies of folders have fundamental issues for both expert and novice users, but we have kind of squared with it and learned to manage it as good as we can.

There are at least two problem areas that I can think of:

To find a file or a document you created you need to remember where you have placed it and as the number of files grow our capacity to remeber diminishes.

When locating a document, the user can either try to remember where exactly he has placed the document he is looking for, or he can ask himself the question of where he would put this item now, if he had to file it, looking for it there — a process very similar to actually filing that same document. Due to the fact that most computer users are simply not able to remember the exact locations of all documents in their ever-growing document collections, in many cases, users have to revert to the latter variant when seeking a file, thereby performing a simulated filing (categorization) task very often.

This is better demonstrated with a scenario: You receive an email with a document that needs to be stored but you are quite busy and need to make a quick decision about where it should be stored, so you categorise the document on the fly, create a folder and place the document in it or simply place the document in a preexisting folder with the promise to rectify the situation later!

How this categorisation takes place is quite problematic and does impact on findability as users can't remember where exactly they have placed the document and will automaticaly resort to guess work after few failed attempts.

In both cases mentioned above (users trying to find an item or create a new one) the main assumption behind the design is that users have a plan and will execute their plan by "computing" the best course of action to achieve their goal. This is not necessarily true. users have simply an idea of a "plan" and they don't compute before taking action, rather their actions are determined by localised contingencies and circumstances that arise in situ.

File systems or nested hierarchies of folders are examples of designs influenced by the cognitivism of the early 70's (Still prevalent today). The rationale of which was described by Lucy schulman professor of Anthropology of Science and Technology at Lancaster University and author of "plans and situated action"

The cognitivist strategy is to interject a mental operation between environmental stimulus and behavioural response; in essence, to relocate the causes of action from the environment that impinges upon the actor, to processes-abstractable as computation-in the actor's head.

Fortunately with sustained UX effort assumptions and "plans" are questioned,interrogated and challenged by putting the users and their observed behaviour at the centre of the design process.

If this sustained effort continues we might see interesting and more valid paradigms when viewing our personal information for example:

BumpTop, a user interface that takes the usual desktop metaphor to a glorious, 3-D extreme, transforming file navigation into a freewheeling playground of crumpled documents and clipping-covered "walls." 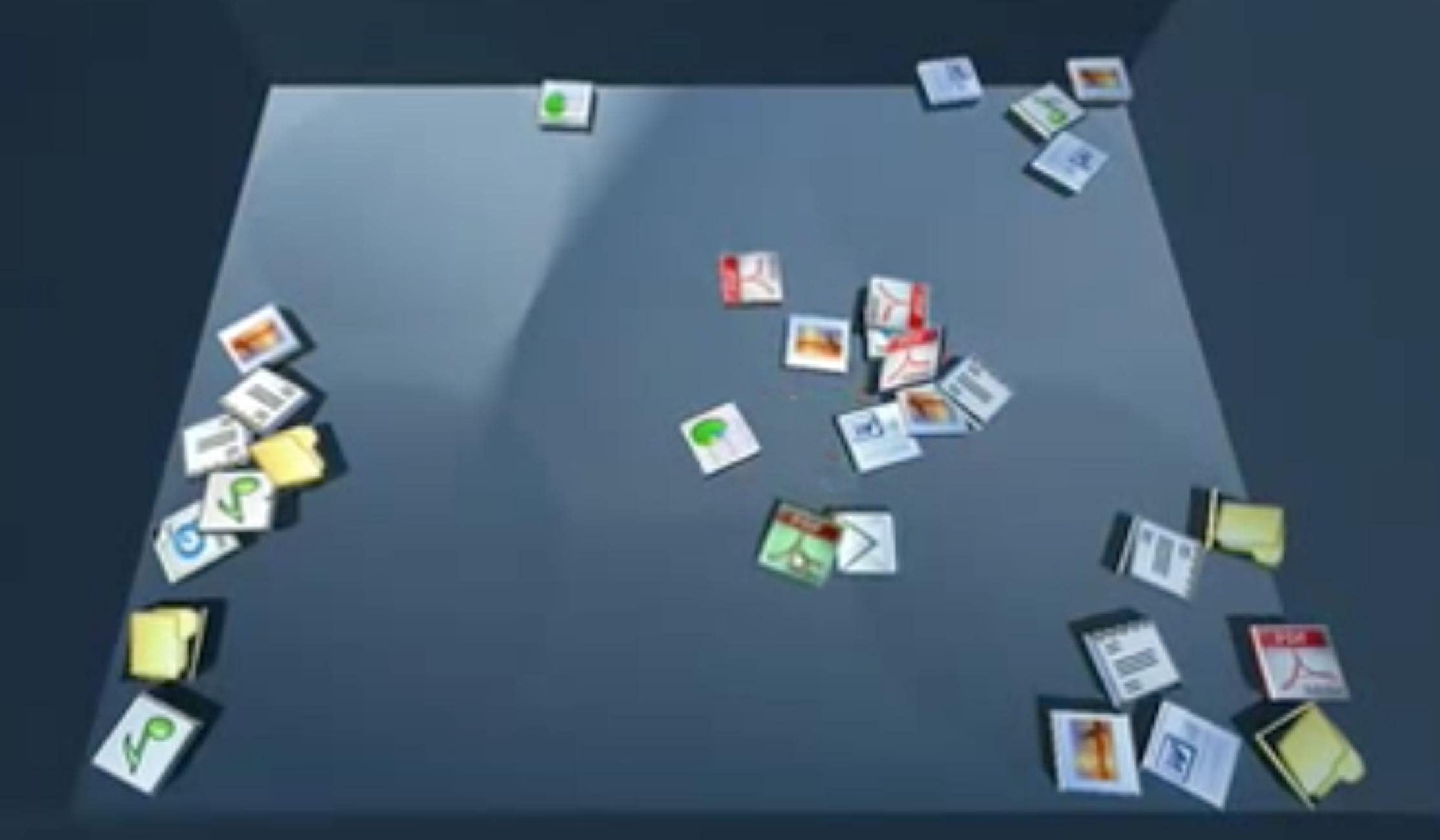 I think the following quote which prefaced schulman book sums-up things quite well:

Thomas Gladwin (1964) has written a brilliant article contrasting the method by which the Trukese navigate the open sea, with that by which Europeans navigate. He points out that the European navigator begins with a plan-a course-which he has charted according to certain universal principles, and he carries out his voyage by relating his every move to that plan. His effort throughout his voyage is directed to remaining 'on course.' If unexpected events occur, he must first alter the plan, then respond accordingly.

The Trukese navigator begins with an objective rather than a plan. He sets off toward the objective and responds to conditions as they arise in an ad hoc fashion. He utilizes information provided by the wind, the waves, the tide and current, the fauna, the stars, the clouds, the sound of the water on the side of the boat, and he steers accordingly. His effort is directed to doing whatever is necessary to reach the objective. If asked, he can point to his objective at any moment, but he cannot describe his course (Gerald Berreman 1966).

What is your definition of a novice user AND why aren't you testing to see what confuses them?

Who are your users? What makes you concerned that they don't understand this? Do you have concrete evidence that your users are hindered / dropping out of your application?

10
File Management As A UX Team
2
Should Operating Systems Hide Sizes of Files/Folders the User is Denied Access to?
1
Can we assume a file stored in the cloud and link saved in the pocket app, are same?
141
Is the folder structure dying?
2
Folders and Tagging pattern for a shared files?
2
Displaying duplicate files
2
"Link", "Alias" or "Create shortcut" in WP Media Library
2
Displaying actions for item lists
0
Ask metadata for each file added to a folder (possibly many files added at the same time)
2
What are good principles for organizing files?