I am trying to design a selection pop-up for a medical website I'm working on. The idea of the pop-up is that the user should be able to specify (for a specific medical sample) the following three values: organism, antibiotic and susceptibility.

In the same sample you can have the same organism tested against different antibiotic. The design I came up with in the first instance was a dropdown with the organism that when selected will present a list of all antibiotics with a radiogroup... The problem was that with multiple organisms the resulting list would be too large (imagine there are around 45 of them). So the new design is something similar: 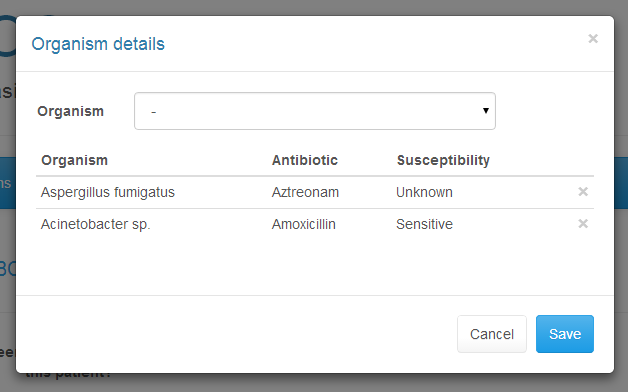 The top dropdown, when enabled, shows the other two: 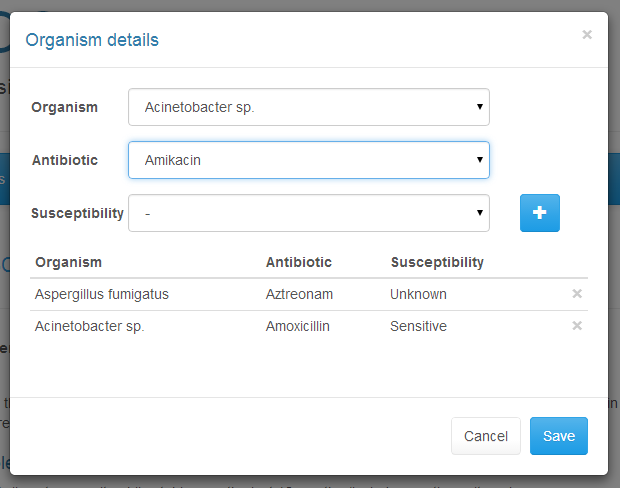 After selection the + button adds the values to the table below and clicking Save will save the sample (and reset the dropdowns).

Now this design seems quite right but here are my problems:

Does anyone have any idea on how to improve this? This "editing" box is already a modal dialog so I would like to avoid opening another modal.

To tackle your problems each in turn:

organisms and antibiotics are in the region of 40-50 values... If this is not too much for a dropdown is probably near the limit

The most direct, simple solution is to switch from a dropdown to a combobox with autocomplete. I assume this form is at least relatively important and users likely go through selecting things pretty often, so you get to kill two birds with one stone using a combobox:

The susceptibility list on the contrary only has 3 values, so it seems better suited for a radiogroup

Do you foresee the susceptibility list growing to more than 3 values in the future? If not, it may indeed be better suited for a radiogroup.

However, it looks like you're using Bootstrap, which provides a more user-friendly buttongroup class, which would provide toggleable buttons that better conform to the rest of your form than radios would. You could easily in-place replace the susceptibility dropdown with a three-button button group. Bonus: it's one less click (and far less eye-scanning) than clicking a dropdown and a value within it!

You can take lots of approaches here to make this more visible, but each of them boil down to structure in the form. If your goal is to let users know they can add the same organism multiple times with different antibiotics, here's some example actions you can take (and probably use to come up with your own idea):

Not the answer you're looking for? Browse other questions tagged dropdown drop-down-list or ask your own question.

5
Dropdown issues on Mac
7
Dropdown option order best practices when not using alpha sorting
5
Checkboxes in a dropdown. Need a "validate" button?
4
Deleting items from a dropdown menu
4
Touch-friendly nested checkboxes/drilldown
1
Dropdown options that open popups
2
Best way to represent multilevel multiselect location dropdown
2
Dropdown chooser that contains both a list of options AND an input box
4
Standard behaviour of dropdown buttons and its styling
3
Dropdown that takes instant action on a web app - is this an accessibility or usability issue?