Why do people mount TVs so high on the wall in their homes? [closed]

Ask Question
Asked 9 years ago
Active 3 years, 2 months ago
Viewed 39k times
37
Closed. This question is opinion-based. It is not currently accepting answers.

When I was a kid, movie theatres tended to have the screens fairly high and the seats were all at or near ground level (very gentle slope), meaning we all looked up at the screen. Over time people apparently concluded that this was bad, as stadium seating and higher seating elevations (relative to the screen) have become the norm in the theatres I've been in. Now it's much easier to look straight ahead at the screen.

Why, then, when LCD and plasma TVs give us the ability to mount the screen on a wall instead of putting it on a stand, do so many people mount it at or above eye level while standing? This means that if you sit to watch TV (which most of us do), you're looking up at the screen. I'm talking about people's homes, e.g. above the fireplace in the living room, not restaurants where other considerations might apply (like battles for control or risk of damage from patrons).

Are people being driven by a sense of what's aesthetic on walls (we're used to hanging pictures, mirrors, etc higher)? Is there some user-experience reason that it's better to look up when watching TV? If the latter, why doesn't it apply to movie theatres?

It's usually the Fireplace that causes this. Traditionally, the fireplace was the central focus of the room. These days, it's often the TV. Obviously, it's easier to move the TV than it is the fireplace, hence the high mounted TVs in rooms with fireplaces.

Ergonomically, it's poor. Most recommendations for TVs (and computer screens, for that matter) is that the the top-half of the screen be mounted at eye-line. Aesthetically, however, it looks nice in a magazines and real estate listings.

So, this is likely an example of form trumping function.

A few reasons, off the top of my head:

At a movie theater, the screen is high up so you can see over other people's heads.

At home, people try to recreate a movie theater.

Are you familiar with the parable of the pot roast and the pan?

(for what it's worth, my TV's centerline is aligned with my eyes when I slouch on the couch. So it's not everyone that does this.)

Another consideration ... Some people have small kids around (or have friends with small kids) and they don't want their nice new TV to get trashed.

If it's opposite to the bed, it's really hard to look straight forward while lying on it.

But it could be that they're just following some instructions coming with the TV or they've seen that it's this way at the neighbours', so they do it that way as well.

The TV isn't the only thing hanging on the wall, and to get the right balance - you hang the TV higher up on the wall. At that time, the TV is off and you see it as a thing among others and want it to be nicely placed.

When you realize you mounted the TV too high up on the wall, since its uncomfortable to look up, it's too late to change. The drilling holes in the wall are already there. If you where to lower the TV you also need to fill the other holes, and paint them over. Takes too long, so we'll do it later.

So you're stuck with a too high mounted TV set 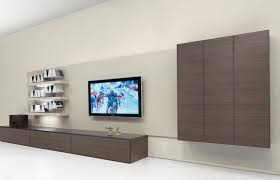 In public spaces like restaurants TVs are usually placed out of arm's reach to prevent the conflicts that might otherwise arise.

488
Why do people clear the screen multiple times when using a calculator?
15
Why is the accelerator pedal different
32
Why are AC adapters (wall warts) designed to block adjacent AC outlets?
65
How could you prevent users from leaving their original copy in the photocopier?
23
How to encourage people to move to the back of the bus?
11
Why do 4-wheel suitcases usually have their wheels on the short side, rather than the long side?