How to encourage people to move to the back of the bus?

The diagram below shows the layout of the public transportation buses in my city:

What this 2-dimensional diagram cannot show properly is that the rear area of the bus is raised about 2 feet above the floor of the rest, those 2 stairs being necessary to connect the sections. That seating area at the rear of the bus is obviously important. It can hold about 15 people seated and probably an additional 10 standing in the aisle.

The trouble is that when the bus becomes crowded and runs out of seating space in the front area, people do not move to the rear area. Though it is only a few steps away up the stairs, they cease to move. I suspect that it might be because the stairs are painted yellow to warn riders of their presence. Passengers are content to pool in the space in front of the rear doors. If people continue to board, they fill the front aisle and then the open space behind the driver and front doors (often crowding that area to particular extremes). The result looks something like this, where circles represent people:

Though the driver has a button that causes a pre-recorded voice to announce "Please move to the rear of the bus", people do not obey it and the driver must yell to tell people to move to the back, and then they do not make a proper effort and the rear is less crowded than it could be. How can the bus be better designed to encourage people to occupy the rear by default?

Remove seats in the front area

The area between the doors is often occupied by people standing, while the seats in the back are empty.

Obviously, people gain more from standing there than from sitting in the back. If this is a city bus, with short distances between stops, people might value ease of getting off the bus above sitting. When transitioning from a walking / standing position to a sitting one, you often must rearrange your luggage, like a backpack. If you're only on for a few stops, you may not want to bother.
Also, in the area between the doors, people have access to two doors, which enables them to pick the other if one is blocked or out of reach.

By removing the seats on the left, the right, or even on both sides in the area between the doors, you create more room for people to stand, increasing the capacity of the bus, and making it clear that you can sit in the rear, or stand in the front.
This separates two different groups of passengers: those only on for a couple of stops, and those on for a longer ride.

It would be best to have a couple of seats directly behind the driver, designated for people having difficulty walking. You don't want them to have to make their way to the back of the bus.

This is a common situation for bus drivers and passengers in Australia as well (hard to believe since our population size and density is nowhere near what it is compared to other cities). I have often thought that sacrificing some of the advertising space positioned at the eyeline (and above, which is where people look at to avoid looking directly at someone else) would be a good place for messages like this, because otherwise people just don't realize that they need to move back to give room to more people. I don't really think there is scope for a bus redesign, but better signs and behavioural changes are 'quick wins' if implemented and reinforced well.

I think there are a couple of plausible reasons why people don't move to the back, and some possible things that might help to address the problems:

I actually think that removing one of the seats at the back that is against the side of the bus will actually create a more open space and encourage people to move towards the back. Generally people want to have some personal space and because the seat takes up room it doesn't encourage people to move to the back. Perhaps opening the space up a bit more at the back will help.

I don't think that there is a design solution to encourage people to move to the rear of the bus by default. This is not a task people have in their heads when they board the bus. There are folks with a task to enter the bus and find something to hold on, and there are folks who wants to board and find a place to seat. Besides that, some people will stand next to seaters because they are traveling together, no rule will make them separate, unless standing is not allowed. Moreover, there is a group of passengers giving bad rep to back seats.

Remove one seat from each row in front part of the bus.

I think that the best solution for partially occupied rear part of the bus is to remove one seat from each row in the front part of the bus. This will make the aisle wider and make it possible to pass through even if some passengers are standing there. Slightly shifted row should also improve experience of passing through since poles and handles will be more reachable.

If rear door is equipped with extendable ramps I would also suggest to move strollers and wheelchairs area to the middle of the bus. It is likely that lonesome standing folks will occupy the area because it is wider and roomier part of the bus (and they are probably sociophobes). Presumably the rule to enter at the front, exit in rear door does not apply to wheelchairs and strollers.

Introduce self-service ticketing system and make rear door one to board the bus.

Alternatively, make the rear door preferable for entrance, equip busses with a kind of composteur system and encourage people to buy tickets in advance

Remove the two stairs to the rear of the Bus

There is a relation between this problem to this famous example: 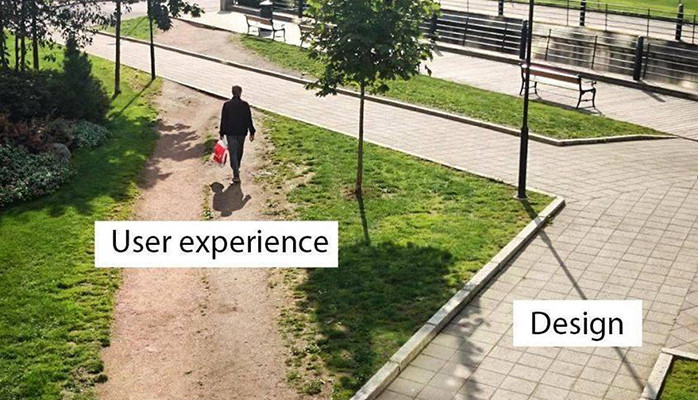 People are taking the convenient way, which not necessarily the designed one.

Not claiming to be an expert but it appears to be some psychological affect to the height difference between the front and rear areas.

So, it's just inconvenient to go up these two stairs. Though it may look like a small and meaningless inconvenience, people tend avoid it altough the "price" might be high.

By the way, once the front of the bus is even a bit more occupied due to any reason, the crowd psychology (people tend to imitate others behavior) is probably intensifying the problem.

Not the answer you're looking for? Browse other questions tagged physical transport or ask your own question.

14
How can you indicate a hidden button on the back of a device?
28
How to stop people becoming marooned on a causeway
2
public transit bus stop and door buttons
41
How do blind people know where to find Braille signs?
5
Encourage use of only one roll at a time from toilet paper dispenser
1
What is the purpose of jackets having small zipperless back pockets just below the neck?
65
How to convey: “don't move until the task is done!”
4
How do blind people cook?