When thinking about how (real-world) traffic lights work, I wonder if there is a more intuitive way to display the yellow light. The meaning of Green and Red are states:

(And depending on the country, it may mean as well:)

This can be judged as imperfect user experience, as "instant" is somewhat unspecific, and similar methaphors (lamps) are used for different concepts (state vs. progress). (The "user" here is the driver of a vehicle.)

Now, of course, traffic lights are heavily institutionalized, it would be very difficult to establish a different norm. But are there variations, design studies or research of traffic lamps that try to adress this problem?

Check out this rotary traffic signal used between 1938 and 1970: 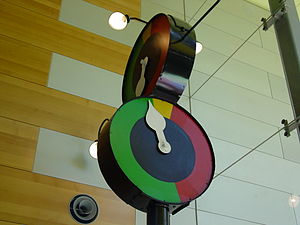 Slightly less directly connected: ramp meters, and there are definitely lots of variations in operation around the world - and variations in the timings too. Good ol' wikipedia!

In some parts of Thailand the traffic lights have a large second timer which counts down to the next traffic light change. I found this amazingly useful and intuitive to use and wondered why other countries don't adopt it. 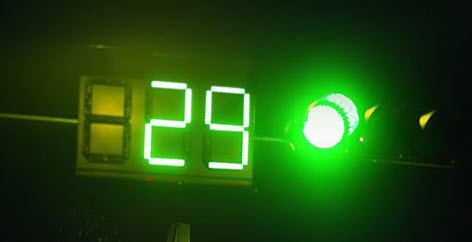 So the light with the timer tells you how much longer you have until the current light changes.

This site has a design for a light that would count down each color in a circle around the light.

Though not in the site's design, having the red light turn yellow when it got close enough to the end of it's countdown would work for colorblind people as long as the green and the red lights were still separate. 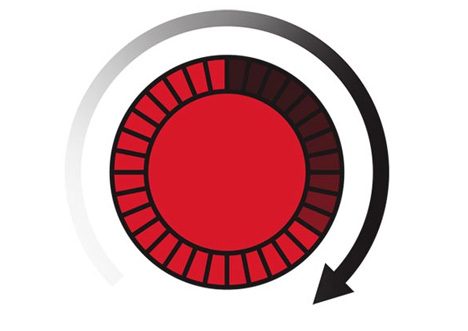 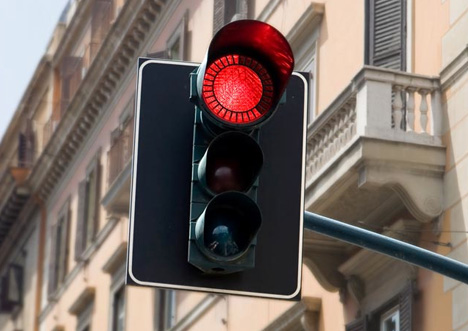 It adresses a lot of problems at the same time.

Not an answer but a comment: A green traffic light is the most dangerous traffic lights of all, because it is the most dubious of all. In the country where I live both yellow (orange in fact) and red mean exactly the same thing: STOP!

The green light means go ahead, but can turn into a yellow one at any time without no prior warning. There is no timer indication of when it will turn into yellow.

The yellow light exists only for those rare cases where in fact you were unable to stop safely at the time the green turned into orange. You are still breaking the law except you will probably not be fined for it.

There is something similar as a countdown on the green traffic light in Austria (I think it's the same in some other countries). It's a very simple yet useful concept:

Before turning from green to yellow, the green light blinks several times.

This means there is no sudden change from green to yellow.

A quick sketch for a rotary traffic signal (updated for our century): 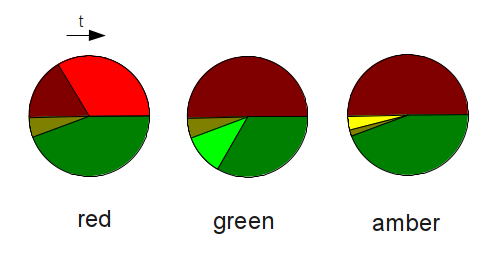 In contrast to the original, this is LED-based, not mechanical. The dark colors are LEDs that are off (should be even darker so that the contrast is higher) - from far, only the slice of color is seen.

EDIT: 2nd version so that red remains dominant even if it will change soon: 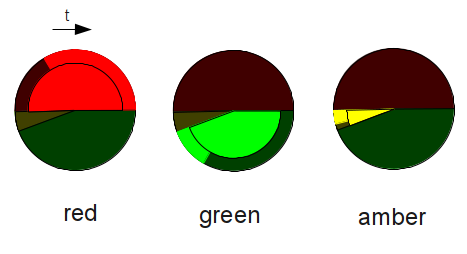 I suppose the answer depends on what you are using traffic lights for. If they are indicating - say - the level of orders that have come in compared to last year, then amber indicates "Warning", which does match with the real meaning of the Amber.

The actual real traffic lights show amber as an indication that something is changing. You need to know where it has been to understand the complete meaning, but it is an indicator of something changing.

I think there is a good argument - I have seen this argued somewhere - that the simple colour indicators are probably only reasonable for very blunt displays - where something red needs to be sorted, and something amber needs to be looked at. In the same way, a red light means you have to stop, and an amber means you should be prepared to stop or start.

Personally, I think Yellow is a state just like Red and Green, if you define "state" as in an FSM. It is a "transitional" state between the "resting" states Red and Green, indicating that the light will change to the other "resting" state in the very near-term. The task at that state is to wait 2-3 seconds, then transition to either Red or Green.

I generally dislike the idea of countdown timers in general, even as I find myself using the pedestrian timer where it's available in areas of D/FW. People who don't notice that the light has turned green are generally so distracted they wouldn't pay attention to a countdown, and those who do pay attention would be encouraged to go, go faster, or stop based more on the timer than the light. If you had a timer in red counting down "10,9,8...", you'd hit the gas right as the timer hit zero. Admit it. However, the laws in many states say that whomever is in the intersection who didn't run a red light to get in and isn't blocking it by entering it without having a clear exit has the right of way. Similarly, having a green light with 3 seconds left would encourage you to goose it to catch that light, much like a yellow currently does for most drivers. That puts others around you at risk as your speed increases and your concentration is centered on the light and not your surroundings.

As much as I enjoy rethinking things, the conventional traffic light design has too many things going for it, despite the unfortunate color choices.

While changing the paradigm to a two state FSM may make more logical "sense," there are a few reasons the three state system is in place and why it works.

Which color the stop light is currently is a legal matter. You can pass legally or you can pass illegally; the simple states provide immediate and absolute information regarding whether you are in accordance or violation of the law.

As has been mentioned there are certain fears that a countdown may cause some people to intentionally speed up (much as the yellow light does), whether that's the case or not would require research. However I would never want my users "eyeball" legality; it's legal to do X or it's not. I don't want just anyone to assume "Yes, I can probably legally cross that intersection". It's obviously a problem with yellow lights as well, but this is a case where giving users more information might cause them to make riskier or more poorly informed decisions. While we can clearly indicate exactly how much time remains on the light the matter of whether one will cross the light while red or green is too complex of an equation to ask people to perform accurately.

Secondly, the colors of light is seen as a state, even if it is an indication of progress. All solutions I've seen that make an effort to indicate progress rather than state are significantly more complicated than the simple 3 colors, 3 positions set up, and users are likely to still think of the system in terms of 3 states.

The progress/timer concept also seems to exacerbate, not alleviate the problem of the 3 states of the standard traffic light. The third "yellow" state wavers between "stop" or "I should speed up" depending on the user, giving them raw data to support this claim seems questionable, especially when you're murkying the legal matter of "do I stop or do I go". And as I said before, it's not raw data that's easily and objectively operated on. In traffic things should be as direct and objective as possible.

Not the answer you're looking for? Browse other questions tagged design research physical indicator signs or ask your own question.

36
Traffic lights: why yellow before green?

36
Traffic lights: why yellow before green?
10
Traffic light, no more shapes?
26
How to stop car lights being left on
71
Why do traffic lights have three separate light bulbs instead of having one?
1
form save progress indication
1
Indicating a folded state
1
I need help picking a color for colorblind people
1
Why don't traffic lights include the time until the light goes red or goes green?
1
Progress indicator for two steps
3
Most visible wavelength/ color for mesopic vision