Is showing a blank page preferable to showing an empty one?

If you don't care about the context of my question, you can jump down to the images, under "Question."

I'm modifying an exeisting web application--think "social network," although it's not exactly--to work with AngularJS.

For those not aware, Angular (does a bunch of things, but most relevantly) separates the transfer of data from the transfer of HTML. For those who are aware, I'm really not using Angular to its fullest potential, because each page lives on its own, rather than writing it as a full-on single-page application. I'm aware of that.

Because of the way Angular is working in my setup, the page load is essentially divided into three stages. I'll shadow each with an overly-simplified, hypothetical example of what it might look like.

As you can see, the first and second steps might be confusing to a user. The first is obviously the most unacceptable of all, but even the second doesn't look very nice.

It's worth noting that theoretically, these steps will happen very quickly. I'm going to throw a ton of caching (server- and client-side) at it (particularly at templates), so I should realistically only be looking at the second step for a fraction of a second for most users. My concern stems primarily for users with low-bandwidth, who might experience delays when waiting for data to be pulled down.

The first step is not dependent on network, since it's just a matter of Angular getting situated (rather, it's dependent, but only on pulling down static JavaScript files, nothing too serious or time-consuming). A standard solution to it is to apply a display: none on the element until Angular understands it. Angular has native support for this, and I'm pretty happy with it, particularly since it's generally just a brief flash. In any event, that's way better than showing raw template code.

As such, my question is centric only on step 2.

Phew, have I talked enough yet? (no, I promise that's not the question)

For step 2, is it more confusing to show users a completely blank page (less the navigation bar), or to show empty templates?

To more clearly illustrate the problem, I modified the HTML on my LinkedIn public profile page to show examples.

On the left, you see empty templates. This is what I explained in my example for step 2 above. The example isn't perfect, since there is some data still there, but I hope you see my point.

On the right, you see the "empty templates" CSS'd away. Only the navigation element is visible.

I don't love either of these solutions, but I think they're the only options.

I should reiterate: this is only a problem for users with slow internet, or in cases where my backend are slower than anticipated. For most users, it will hopefully be just a flash by. It's also worth noting, although not directly relevant here, I intend to add some subtle animations as the data populates.

The way I see it, the first example:

And the second example:

I'm leaning toward the second (right image) solution, to hide all content before the data is injected into it.

I also thought about showing text (which transfers easily, of course) that says "loading," but I'd worry that a user on a quick connection would think they missed something if text showed up more quickly than they could read it.

I've also thought about hiding the navigation bar in addition to the unloaded content. I defaulted against it because I want the user to understand that the page is there and loading (rather than just showing a white page), but perhaps that's not the right decision.

One of the key usability heuristics is: Visibility of system status - The system should always keep users informed about what is going on, through appropriate feedback within reasonable time.

And from Luke W:

Conventional wisdom tells us that when things are going to take a while, we should let people know. In most mobile applications that translates to adding progress bars or spinners when something is happening or loading. While the intentions behind these progress indicators are good, the end result can actually turn out to be bad. It can be bad because progress indicators by definition call attention to the fact that someone needs to wait. It’s like watching the clock tick down -when you do, time seems to go slower.

Have you read about Skeleton Screens at all? They come quite close to your left screenshot - they show the structure of the page with the content blanked out while it is loading. 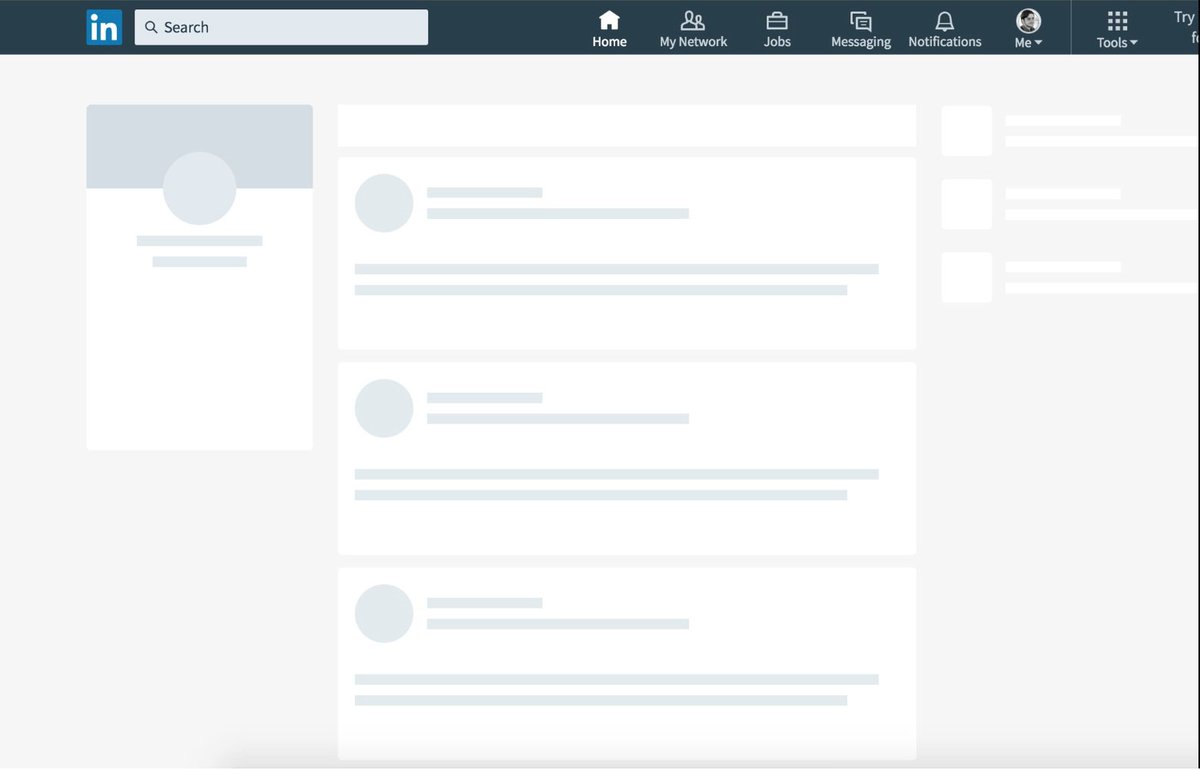 These screens help the user by telling them something is happening - they don't have to guess whether the page has worked or not. Combined with a subtle animation, you can give the user good visual feedback about what's happening.

Perhaps you can utilise this technique for your site?

I'm also building an Angular app at the moment and have some experience with this problem. I also have someone on the team who isn't really aware of what's going on with Angular who I can show the UI to on a regular basis. Often times I change things and show him to see his reaction.

Loading screens may take a second to load and they may add a little extra work but what people are thinking is very much in line with what is happening. There's no doubt or uncertainty like with the other approaches.

That being said I don't think a loading screen is the only option. What's really important here is not showing a template with no data and not showing a blank screen, both of which the user will likely interpret as 'it's broken'. I think an alternative to a loading screen might be adjusting the opacity of the empty template to indicate it's in a transitioning state.

Based on my understanding of the question, I would say that as a usability professional the key to your question is how to best understanding your user base. There are a lot of questions here - how will users react to seeing an empty profile? How long will users wait? Will users understand the premise of what's going on? Will they be frustrated?

You are assuming everything at once, here. I can give you my recommendation based on experience, but ultimately you need to be testing. Get a solution that works with you, based on the fact that you clearly know what you are doing, AB test it. Get your recommended solution then go it at against another solution.

For me the key was here:

How long are we talking the page load to be? Ultimately the loader indicates a page load is happening and therefore users, if they want to complete their objective, will wait for this page load. You can be creative (http://tympanus.net/codrops/2013/09/18/creative-loading-effects/) minimalist, or current (http://ricostacruz.com/nprogress/) but ultimately don't be scared of a progress bar. Yes it adds more weight and therefore time to a page, but surely this is being honest with the user up front explaining they may have to wait for the page to load rather than assuming one or the other scenarios above?

Then test. Test like your life depended on it. And let me know the results.

Displaying empty states The most basic empty state displays a non-interactive image and a text tagline.

Use an image that:

Include a tagline that:

3
Is the screen flicker during a partial page reload a bad user experience?
2
Do I need to inform the user that a view on an iPad app is loading
0
The dreaded "loading page please wait" page
0
How to best deal with slow page load
8
Does a loading animation on a websites initial load improve usability?
0
Data syncronization standard
7
What is the minimum waiting time after when should a page loader be displayed to the user?
2
While redirecting, show "redirecting" page or blank page?
55
Is a slow home page better than a loading bar?
5
How can I manage a module creation screen with multiple lists of templates selections