What reason could Nintendo have had for putting the A and B buttons in a non-alphabetical order?

When Nintendo brought out it's first game system, the NES, it had a controller with four buttons:

However, somewhere, a designer, in their infinite wisdom, decided that the A and B buttons should not be in alphabetical order. So the B button was placed to the left of the A.

The reasons for this have long puzzled me. Surely the layout is counter-intuitive, and has confused many a gamer.

Can anyone suggest the reason for this design? 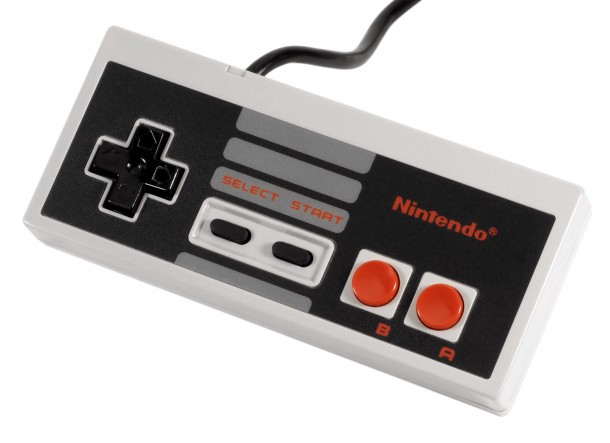 I'm guessing they viewed the button on the right hand side as the primary action button as it's closer to the users thumb, with the button on the left for secondary/less-used action, as it's slightly further away from the thumb (more of a physical exertion on the user).

does appear more memorable. Maybe it does not matter so much for the physical act of playing but for things like explaining the game moves in instructions or for gamers discussing/explaining moves to friends etc. it probably makes it easier to communicate.

For a definitive answer, I guess you're going to have to track down the original developers of the product.

I would like to make a guess as why this layout was chosen though. I think it is deliberate. I think of the order of the A and B buttons as actions, A being the primary action and the secondary. When holding the controller, you'd want the primary action to be most readily available. When the controller is held in both hands, the A button will be right under the thumb of the right hand. The B button, for the secundary action, would require a little more effort to press and certainly more time to acquire.

It's also worth considering that Japanese gamers read from right to left. So in Japan, the buttons would be in alphabetical order.

What would happen if Nintendo elected to switch the button order for the US market? It seems like that inconsistency would cause way more drama than dealing with buttons that look reversed!

It's not about alphabetically ordering the buttons, it's about their function.

B is for Back and therefore makes more sense on the left.

A is for Accept and therefore makes more sense to be on the right since accepting is a forward or progressive action.

Much the same as Back and Advance buttons on a browser.

Racing games mapped B and A onto the functions Brake and Accelerate - again a natural left and right distinction - braking being a slowing down or backwards motion and accelerating being a natural progressive or forwards (left to right) motion.

Marking the buttons as B and A made it easier to remember which button did what.

Take your phone (assuming it's an iPhone or shaped similarly to a controller) and hold it sideways, like this controller.

Assuming you use all four directions of the left hand buttons evenly, and you use A 75% of the time, the controller needs to be evenly balanced when your thumbs are over directions and A. The distance from the side to the center of the direction buttons is roughly equivalent to that of the right side to the A button.

Also, there is more stability and control in general if the hands are spread farther apart. If the buttons were in the center of the controller, it would be less comfortable, as your other hands have nowhere to go.

It is uncomfortable to move from the A button to the right. This doesn't really change if the buttons were swapped and tested. Even if you had to hold the controller differently, it will feel easier to move in towards the controller than out.

Growing up with this system, and the ones that came after, it's perfectly logical to me...

The logic is, "A" comes first, so it's the logical choice to label your "primary action" button. Now, your primary action button is of course the one you press most. Therefore, why not make it the easier of the two buttons to get to, by putting it closer to the edge where you can just mash it with your thumb without worrying about the B button getting in the way?

To be fair, your way of thinking is valid as well, and much more common. The Sega Master system, roughly contemporary to the NES but nowhere near as popular as the NES or its successor the Sega Genesis, has its buttons numbered 1 and 2 from left to right. The Genesis has A, B, and C buttons, again arranged left to right. The PlayStation, of course, never bothered with letters; the x, square, circle and triangle have become ubiquitous. XBox uses letters, with A still in the "home base" position but with B to the right of it at "first base", but more importantly each of the thumb buttons is color-coded so that the in-game icons for each button are very distinct either by shape, color, or both. From what I've seen the colors of each button have been far more important than the letters.

The SNES kept the "A outside" paradigm, but the "ballparked" arrangement of buttons made the B button easier to get to than the A button, and on that system the B button became the "primary action" button for most games, with the Y button (above and to the left) becoming the "secondary action" button, allowing "pad-knuckle rocking" (press B with the first knuckle of the thumb and Y with the pad/tip of the thumb). The A and X buttons were then generally relegated to less common tasks.

The A button returned to prominence on the N64 controller, with the ballpark arrangement tweaked to put A in the coveted "home plate" spot, and the B button above and to the left, allowing the easy "thumb-knuckle rocking" that players had gotten used to with B and Y on the SNES. The GCN kept the focus on the A button, this time by making it the biggest button on the controller (possibly the biggest single button on any stock console controller) but B was still kept on the left. Of course the Wii's controller was a complete paradigm shift to incorporate the pointer/motion-sensing aspect, and the A and B buttons are on completely opposite sides of the thing.

It's notable that when the Wii-mote is held sideways and used "platform" or "racing"-style (not the most comfortable arrangement by any means, but passable especially when using a shell like the Wii Wheel or BOSS), the buttons pressed by the right thumb are the "1" and "2" buttons, and are arranged left to right. So it took 20 years, but Nintendo did eventually get with the program in this small way. The plug-in "Classic Controller", however, reverts to the SNES layout with B at "home plate" and A at "first base" (even though many of the games it's used to play, like NES Virtual Console games, use A as the default primary action button).

While understanding the logical thought @André points out I would like to point a flaw in this thought process.

If I were to calculate the amount of time my B is pressed vs A in this topics chosen 'Go-to-Game' of I would conclude that B is my Primary. Also, 'B just made him run' should be 'B saves your life'.

I would raise an arguement of 'That is just what happened' If I think about it from a perspective of making a video game program in a market that was remotely fresh I would imagine a group working hard to get functionality down. In the attempt of creating a working model naming something button A and button B would not be unheard of. They may have even had them switched initially and liked the simplicity and universal usage of these names. They may have originally had A on the left but through a mass production wiring mistake they had to switch the painting of the controllers. Given all the possible reasons, to me the most likely is it was a happy accident.

However, this does open up other questions like why they chose to use X Y and not Y Z for the SNES.
Why was a select button even created when there was an ability to use the directional pad for user selection?

They're actually not round the wrong way (from a usage perspective)...

This subsequently reinforces Spiral13's answer in that the A button is considered the primary action button which is closer to the hand controlling the controls on the right hand side of the controller.

Not the answer you're looking for? Browse other questions tagged buttons design physical or ask your own question.

8
How could petrol forecourts be designed to improve efficiency?
16
Have usability studies been conducted on the use of alphanumeric characters as labels for controller buttons?
1
iOS multitasking closing is poorly designed?

53
What are the differences between buttons and links?
6
What is the reason behind the + sign/icons with buttons?
14
What is the reason for Concave round buttons in Elevators
3
What is the optimal position for groupings of odd numbered buttons on a form?
0
What is the best order for several buttons at the foot of a modal?
3
Best position and labels for buttons on an order creation page
8
Is there a standard order for `Stop`, `Play`, `Back`, and `Forward` buttons?
1
What is the best terminology to use for buttons for running, saving and duplicating reports?
0
What could be a possible reason for the cancel button to be bold when changing an iPhone's language?
12
What should the sequence be for Download and Delete buttons?