How to show a score without numbers?

Context : I'm working on a telematics app for an insurance company. Drivers have to drive correctly and the AI calculates their global score vs their trip score. The score can vary (increase or decrease). There was a fraud in the past when people could see their trip score and flag that trip as "was not driving", so we decided to get rid of the trip score. Users get a rebate on their insurance if they get a good global score at the end of the snapshot, they also have 3 "trip pardon" they can use.

The problem is that the people cannot evaluate their driving skills effectively because there's nothing to compare or no indication that the trip was a good one except in the details, but the information is too specifics ex: fast acceleration, hard braking, etc.. Which doesn't give a big picture for the user. Why aren't we using score anymore you would ask? The score was varying a lot and people made assumption that a good score, let's say 94%, would make their global a lot better, but one trip doesn't really change much in the end.

Proposition : I tried the traffic light metaphor (red,yellow,green) but it's not accessible for the visually impaired users. I also tried the stars (1,2,3) but it doesn't fit the brand well. Finally I tried the gauge metaphor, but it's too complicated to understand at first sight (low gauge = bad or good?).

I'm out of ideas right now, you guys have any suggestions?

If I see a gauge needle at full throttle on a driving app my logical perception would be I was driving too fast. Stars would mean my driving was stellar. A traffic light, besides color considerations could mean to stop, to drive carefully or "hey, go on".

In all cases, they fall into what Saussure called semiotic arbitrariness, so I think you should give proper testing to this.

So, after reading your problem, and how users will get a rebate (or not), and teh known fact that indications will bias results, I think the best path is to avoid any icon. Simply start by letting them know they may get a rebate based on analysis of their driving (PLEASE TEST THIS WORDING!!!!). Once they do all trips, if they qualify, just send them a message letting they know they won. Otherwise, just do nothing.

I think you're on the right track with the gauge metaphor. Have you considered incorporating the color from your traffic light metaphor, i.e. having "high" gauges in green, "low" gauges in red? It provides accessible information for the visually impaired but can also provide a subtle indicator, depending on how much color you want to incorporate (i.e. coloring a few ticks or the entire icon).

I like the way that fitbit does this type of UI. 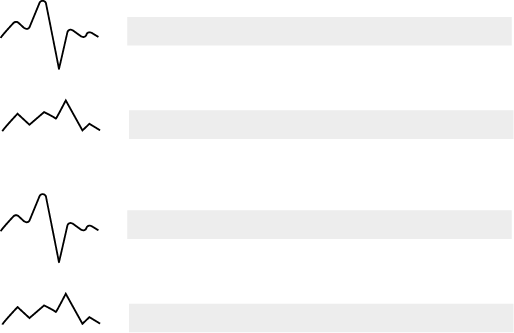 this would allow you to get real detailed in the performance. Fit bit color code them too. I think this would fix a few of the problems you've had with the icons you have tried.

Stars are a common use for the rating, but if it is not an option for your project, try progress bar or adapt the traffic light metaphor - use one bullet red, two bullets yellow or three bullets green. In this way would be accessible for the visually impaired users.

Not the answer you're looking for? Browse other questions tagged icons info-visualisation app visual-cues or ask your own question.

6
How to show related data together in one diagram?
11
How best to show the 'weight' (importance) of bullet-ed items in a non-intrusive (creative) way?
6
Representing large numbers
15
How to handle users typing without input focus
5
Is it appropriate to use a donut chart to show a User's score?
2
How to show bunch of numeric values without any text labels as mobile app list item?
2
How to represent a score that can be positive or negative?