Ask Question
Asked 12 years, 5 months ago
Modified 3 years, 11 months ago
Viewed 18k times
35
As it currently stands, this question is not a good fit for our Q&A format. We expect answers to be supported by facts, references, or expertise, but this question will likely solicit debate, arguments, polling, or extended discussion. If you feel that this question can be improved and possibly reopened, visit the help center for guidance.
Closed 10 years ago.

This Ars Technica article discusses the design principles of the Star Trek LCARS touch-based user interface from The Next Generation as it was imagined in 1987 and how it relates to Apple's iPad.

Reading this article led me to wonder: what are some other examples of interesting, inspiring, forward-thinking user interfaces from sci-fi universes? Please add references or imagery where possible, and try to talk a bit about why it's interesting. 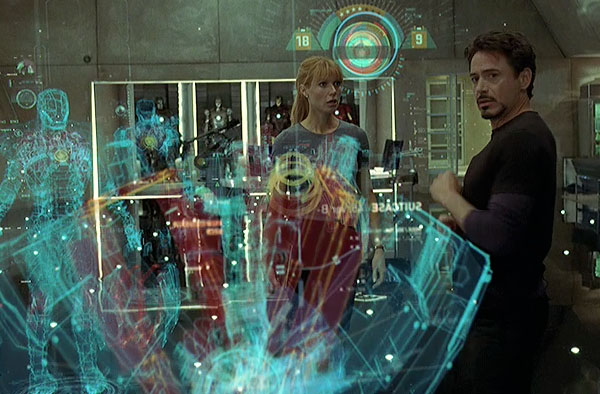 The holographic 3d gui in ironman 2 is awesome, see it in action on youtube

Some good examples here, but we can also look to SciFi, particularly movie and TV SciFi, for inspiration on what not to do. SciFi UIs are designed to tell a story to the audience, not make a good UI for the characters. Examples:

One UI you rarely see in SciFi is thought-controlled UIs, even though it’s “obviously” the ultimate in intuitiveness and speed. That’s because thinking doesn’t give the audience much to look at. The movie Firefox featured a Soviet fighter with thought control, but when it came time for the protagonist to use it, he ended up speaking his thoughts slowly aloud –sort of defeating the entire advantage of a thought-controlled UI.

Terminator augmented reality vision - some iPhone apps try to do this

Also known as a HUD (Heads Up Display)

The desk interface from the movie "The Island". Interesting blend somewhere between Microsofts Surface and more tactile products like Siftables.

Tron (1982) showed a device very similar to a multi-touch surface. The one used to communicate with the MCP. 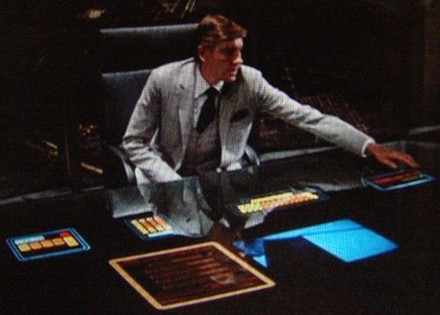 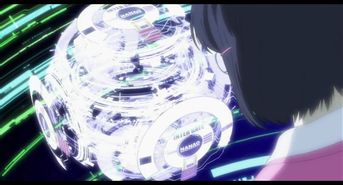 View of robots from animatrix

Minority Report is usually one that people mention. Microsoft Kinect is definitely a step in that direction, at least in a hardware sense. However, I think we ultimately end up with a mind/machine interface.

For a different direction, take a look at the Aurora Concept Browser.

The guy behind a bunch of Hollywood UI:

And did you guys/gals forgot about the LCARS, the Star Trek GUI/OS used in the Next Generation TV series? :) http://en.wikipedia.org/wiki/LCARS 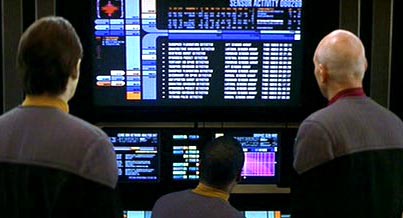 Avatar and lots of movies like it, had interesting UI inside robots and giant machines. 3D interfaces where people can move things by hand in an imaginary space, rotate earth and stars by some gestures. that's interesting.

Anyone interested in the subject should definitely check out Nathan Shedroff´s notes from his presentation at dconstruct/ux week.

Make It So: What Interaction Designers can Learn from Science Fiction Interfaces (19MB PDF)

I was really blown away by the realistic UI of the Iron Man suit. It seemed like it was actually "designed" rather than just being part of the "effects." If that makes sense. The suit followed his eye movements and depending on what he looked at, the system provided information on that object. The UI even gets streamlined with the Mark 3 suit. Really geeked out on that part of the movie.

The mech suit in District 9 is another great example. Although it didn't feel as polished as the Iron Man UI, it did offer some interesting ideas. When it was under fire, for example, it pointed out (with colored "pings") what direction the shots came from. It also looked like it plugged in directly to his brain. There's a part where it sounds like he's muttering calculations. After an instant or two, he fires on his enemies with great precision.

Also in District 9, I really liked the navigation UI of the alien ship. http://www.youtube.com/watch?v=HicHPRZs6GI&list=PLCC0CF402CF60B949 I've always wondered how we would navigate effectively in 3 dimensions like space or underwater. This interface looks pretty advanced and looks like it was created specifically with that 3rd axis in mind.

Lastly, I need to mention Final Fantasy: spirits within. Some of the displays were a little funky looking, but some, like the wrist computer, were pretty sweet. Especially the virtual keyboards. Image ('cause I don't have enough rep.) http://dl.dropbox.com/u/1461399/final_fantasy_wrist1.jpg 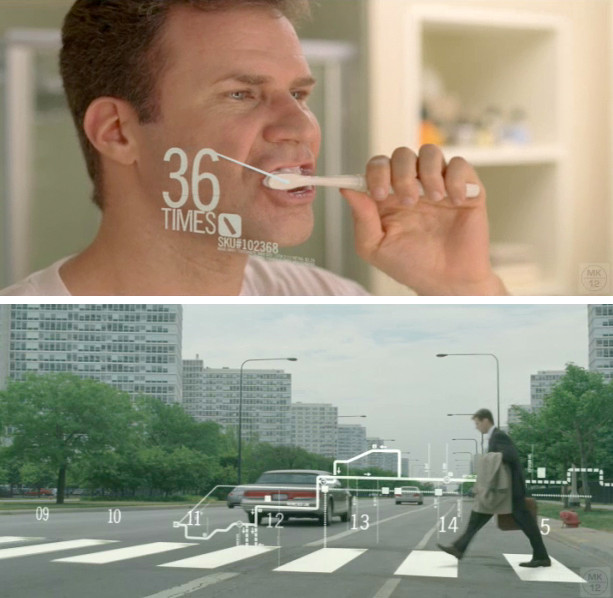 The ultimate UI was the control interface to the ship Andromeda. that's the only kind of UI I want.

The Hitch Hikers Guide to the Galaxy - which predates the Kindle by about 35 years...

...he also had a device which looked rather like a largish electronic calculator. This had about a hundred tiny flat press buttons and a screen about four inches square on which any one of a million "pages" could be summoned at a moment's notice. It looked insanely complicated, and this was one of the reasons why the snug plastic cover it fitted into had the words Don't Panic printed on it in large friendly letters. The other reason was that this device was in fact that most remarkable of all books ever to come out of the great publishing corporations of Ursa Minor - The Hitch Hiker's Guide to the Galaxy. The reason why it was published in the form of a micro sub meson electronic component is that if it were printed in normal book form, an interstellar hitch hiker would require several inconveniently large buildings to carry it around in.

Some shots of an 24 episode. Never been a fan of what they did with the interfaces. In this case, a weird mail client/hybrid, with some encoding and personnel files going on. If you base it on the windows 7 GUI, please don't add weird looking stuff.. 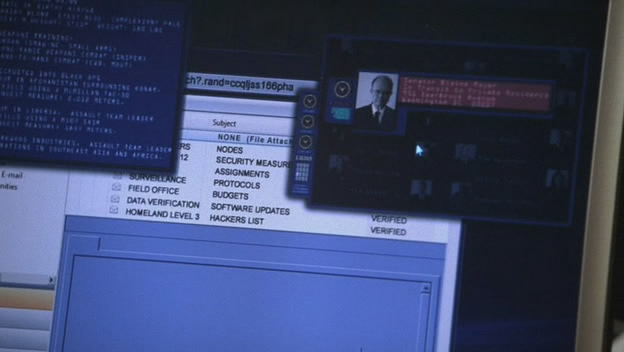 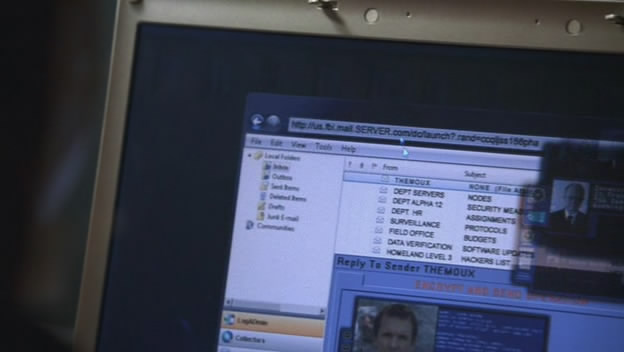 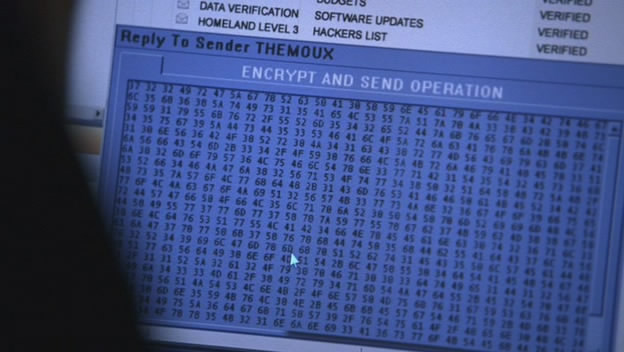 The movie "Gamer" has a concept that is quite intriguing. As a player you control the actions of another human being. Without going into the plot of the movie, I'll attempt to explain the controls or UI. 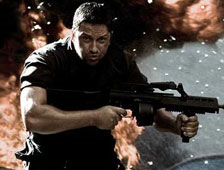 The main character in the game(Gerard Butler) is being control in a real life "war game". The player is sitting in his room surrounded by tv screens 360 degrees around him and above him. His bodily actions control Gerard Butlers character within the game. I tried to find images online of the kid in his room standing up with his arms in a "gun shaped position" playing the game, but couldn't come up with any. A youtube search for "Gamer movie" may show something(I'm at work, no youtube allowed..shhh!) It is like Microsoft Kinect on super steroids!

There is another part of the plot where a man controls a woman in a Sims like surrounding, however it was in real life. The woman who was being controlled would actually "go to work" where she would then be connected to her controller. The controller could then tell her to walk up to people to talk, act crazy etc. Pretty much like Sims... In this case, the controller(man) would wear like goggles on his face, to see, but the control was through his thoughts and voice. 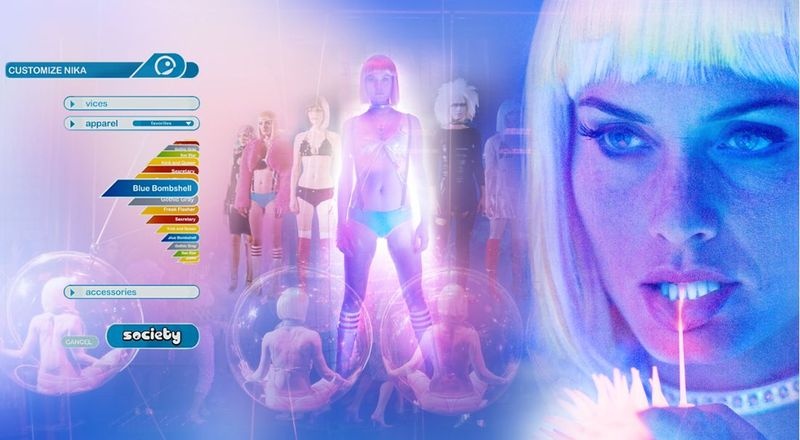 In both cases, the character that was being played was controlled by thought(?), speech and action. The UI was almost invisible at play time or when they started the game. But, in certain scenes, you would see the player setting up the game and they would use full body actions to slide things across the screen, etc., like Minority Report.

The concept of making the UI as transparent as possible is the goal we may be working towards.

Here's one from World Builder: the holographic equivalent of 3dsmax, with a great realtime renderer :-)

Here's another one from Tron.

(Note: that link is to my own blog, but I'm not pointing there to raise my hit count. If someone can find the direct TED link, please post it)

The operating system/GUI seen in swordfish was pretty cool 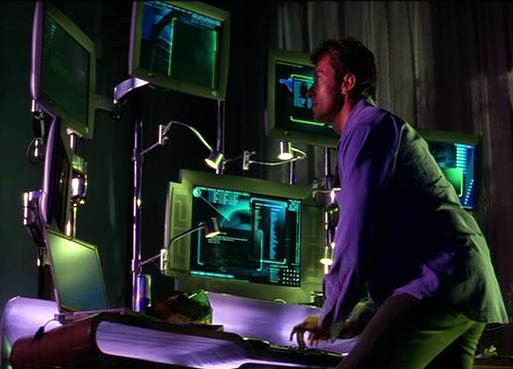 You may well be interested in this book that's due out soon and the accompanying 1 hour video on the subject by the authors.

The Table UI  from the latest Bond movie, Quantum of Solace, designed by MK12 and related UIs/devices, has been somewhat of an inspiration for me in terms of UI design. As tricky as transparent wall displays can be (have to get the lighting right for it to be properly visible), I like MK12's take on context diving.

A number of TV shows and movies have used variations of CDE, OpenLook and TWM as their UIs, especially when they want to look super-techie and show lots of command line stuff.

A couple of examples are Alias & Enemy of The State - he's using an Ultra 10 so CDE sorta makes sense in this context. The dollhouse from Dollhouse uses BeOS. The Bourne Ultimatum rather famously (well, in certain circles) used Bash terminals, which reminds me that Trinity uses a recognised SSH exploit in The Matrix Reloaded, and has to use a bash prompt to do it. What's always suprising and magical about these high-detail ultra-techie interfaces is the amazing context sensitivity of the underlying system - it knows exactly what ancillary windows and information to throw up on the screen, often from the most minimal of input. ;-)

I personally thought that some of the infographics in the city scenes aboard the Axiom in Wall-E were actually quite amazing. It was "for dummies" all the way, but I really liked it.

Robert Wise's 1971 adaption of Michael Crichton's The Andromeda Strain has some of the earliest and most wonderful user interfaces ever created for film. Douglas Trumbull's effects work was amazing and ground breaking and at the time.

More importantly though, these interfaces were plot devices, providing engaging means of narration and exposition.These interfaces were not designed to exist in the film's universe alone. They are often given full or splitscreen presentation directly to the audience. These computer graphics are without question a character in the film, a character which expresses itself succinctly.

This seems at odds with the window dressing role that interfaces often play in films today. 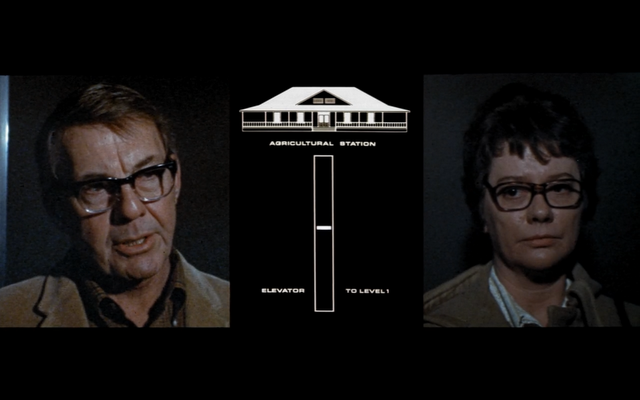 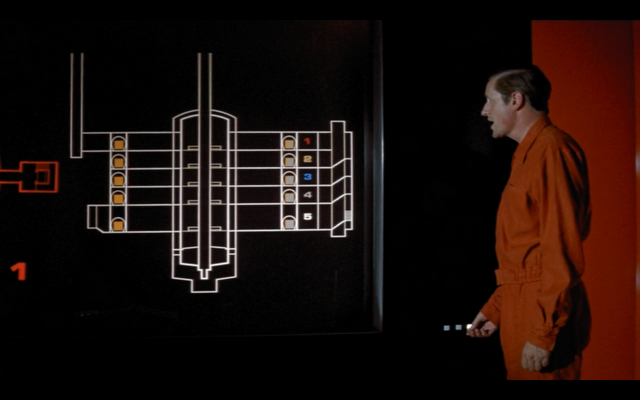 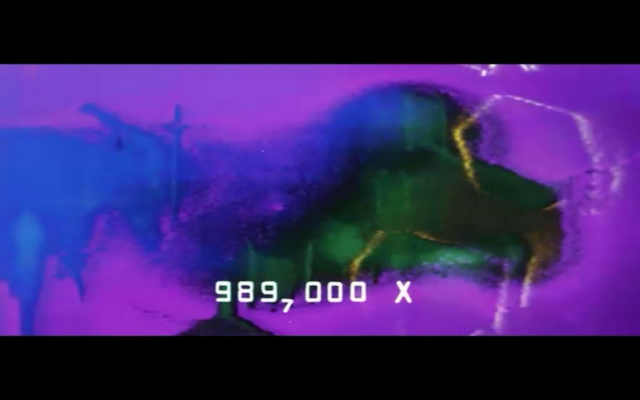 I think the most forward thinking UI is the natural speech recognition. I don't know who came up with the idea first of being able to simply talk to the computer, but it is certainly a key thing in the Star Trek series. It has inspired different companies in the early and late nineties to develop speech recognition software. Most luxury cars today allow you to operate the car's controls like satnav, climate control etc by such software. Later on companies have been trying to develop software that is able to recognize more natural speech rather than predefined commands. Right now we have Siri and comparable services. Am am sure these things still have a long way to go until they truly work like Start Trek has shown us. But when Star Trek has first shown it, we all went "That would be awesome, but totally impossible!".

Another one is the UI from the movie Night Watch. But I can't find any images :(

27
Documents similar to Microsoft's guide on creating the best user experience
5
How to decide between "consistent user interface" and "adequate user interface"?
4
Advice on layout/presentation of information to user in web page
5
iPhone - popup dialog for user input: when it's worth using it?
4
Are there interface design principles that apply to mobile user hand/thumb positions?
1
Which UX principle would address user diversion after login?