On my homepage, I have a very simple design (think Google, but for numbers) with an input box that has a placeholder giving example inputs one might think of entering. This suggested input changes randomly each time you reload the page, hopefully to give new users a suggestion on where to start or older users a search result that gives interesting results.

However, I never see this functionality on other websites, even though some I feel it might fit well. Take the OEIS, they put an example sequence you can try on their website but it never changes, always staying the same.

My question is if there is a reason why I have never seen a website do this before such as it being confusing for the user (or whether I just haven't found any).

Randomly selecting suggestions from a pool could work against discoverability. Depending on how many different methods are possible, one way could be to display a single suggestion, then add a small link 'show more examples.'

Clicking this link could then display a lightbox that could list other methods, or display a short onboarding tour (like the way certain apps provide a brief overview of new features). 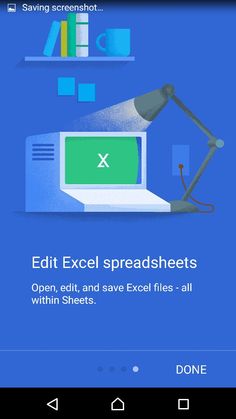 Discoverability is a red herring

One legitimate issue with the rotating example is that it may be a needlessly indirect method of revealing functionality. But, an example feature is one of many ways of revealing new functionality to the user. So, this is only a challenge to discoverability if it's the only approach in use.

Nonetheless, an approach I've seen that benefits discoverability is used by OneLook dictionary. OneLook's homepage displays a list of example searches beneath the search box on the home page. This means that anytime I show up to search I know what all my options are without having to seek them out. 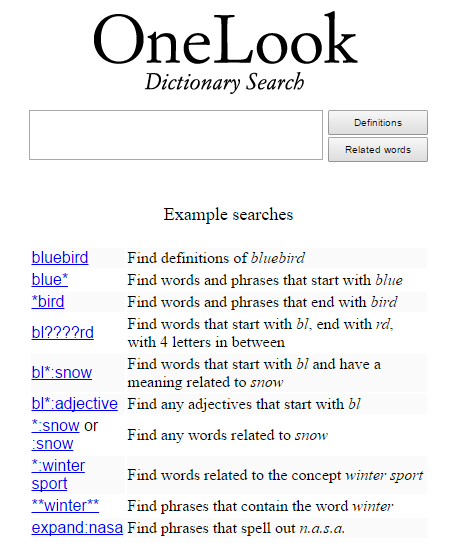 OneLook could have revealed these different search types using rotating examples but it would then take the user more than a dozen visits to the home page to be exposed to all of them.

Objectively speaking, a rotating example shouldn't be any more confusing than a similarly designed static example. Both example types can be potentially confusing or have a number of other usability issues if poorly designed. The OESI approach given by the OP has usability issues due to the example search being provided as a placeholder.

Sometimes placeholders do not disappear when users move their input focus into the field. If the placeholder remains in the field as editable text, users are forced to manually select and delete it. This creates an unnecessary burden on users and increases the interaction cost of filling in the form.

Compare this to the official page for the Ruby programming language which implements rotating code examples. The display box shown below gives a random code example when the page is loaded. 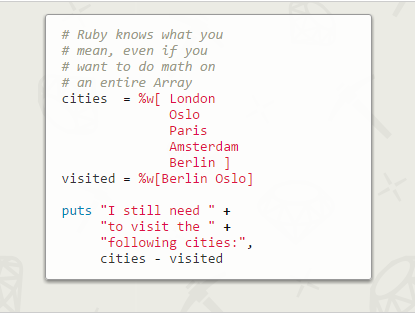 I know this isn't a search example, but imagine if it were, would it be any less confusing if the example stayed the same?

Discoverability, confusion and other usability issues are irrelevant when considering the suitability of rotating examples over static ones. These issues will only matter when we take your design into consideration.

Not the answer you're looking for? Browse other questions tagged web-app search interface or ask your own question.

0
Changing filters/sort order after editing the query of a search
0
changing the browser address bar / window color
1
What is the best way to indicate to the user that an integer must be entered into a textbox?
4
Changing scrolling behavior - good use cases?
1
Does changing colors to visualize different categories make sense?
1
Interface examples for handling “page notes” and highlighted text comments?