Language selection screen - Should it be present Before or Within the Form?

We are building an application that allows a user/owner to create forms and get input from anonymous users (eg:- Customer satisfaction surveys) . And we recently introduced a feature that allows the user/owner to provide the translation of the Form he created.

Now the Dilemma is should we display the language selection before the form that the anonymous users (The ones that are going to answer the survey) views or Should it be present in the answering form itself so that the user could easily switch languages any time.

Lead the user to this page 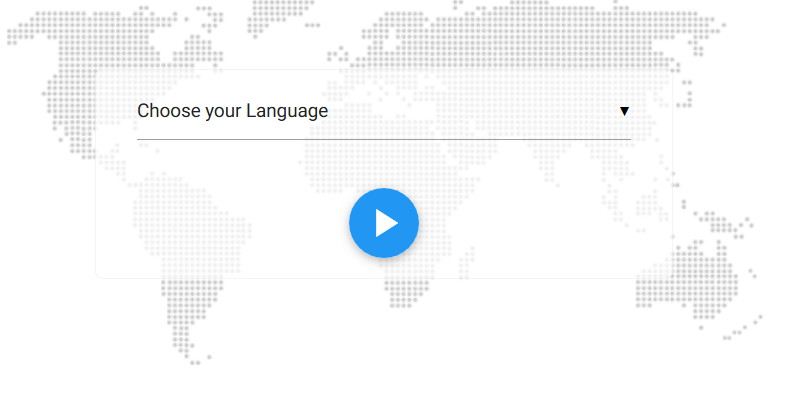 And redirect to the Form after language selection

So which one I should go for in terms of ease of use for the customer?

EDIT: I just noticed that you edited the question and said that the data will not be transferred if the user switches the language after having started with the survey. So the below answer is only relevant if this can be fixed/changed.

If it can’t be fixed, you should definitely not go with approach 2 (as this could lead to data loss). So approach 1 it is, and you should not offer to switch the language after that interstitial page.

(The last paragraph of the old answer still applies: it would be better to use links instead of a select list.)

I’m assuming "can switch languages any time" means that the entered data will be transferred, so no data is lost when users switch the language after having started with the survey. (And in case text inputs exist, that it’s fine to submit text in different languages.)

I think there is no reason not to display the language switcher even if you go with the first approach. So the question should be: Should I add an interstitial language selection page?

I think there are two primary cases when using such an interstitial makes sense:

The first case doesn’t seem to be relevant to you (otherwise your second approach wouldn’t be possible). The second case is relevant if visitors miss the language switcher and leave the page because they can’t understand the selected language.

But you can do something about this: Display the language switcher more prominent.

So if you can make it more obvious that there’s a language switcher, I think there is no reason to have an interstitial language selection page.

If you decide to have this interstitial page, consider displaying the languages as links, instead of hiding them in a select list. The whole purpose of this page is selecting a language, so there is no reason to save space. And users that don’t speak English don’t have to wonder what "Choose your Language" means and if it would be worth it to click it.

We have done apps where we faced this problem, and our approach is as simple as this: since the user will need to interact with the app from the very beginning, we add the language selection in the splash screen, then the whole app will be in the selected language.

Additionally, since the splash screen is where the user has to login and it would be very cumbersome to log off just to switch languages, you can change language in settings. But be aware this is an ADDITIONAL feature, not standalone, the important part is the splash

After many apps and many tests, I can confirm this approach works really well: 0 friction whatsoever, fast interaction, complete undertsanding

Then in the form I would go with your approach of having a language selector at the top.

102
How to graphically represent a language
25
Choose Your Country: Best Usability approach
7
How to represent site language and article language without confusing the user?
3
Redirection on language change
21
Which is the best way to select a language from 400 possibilities?
4
Language switch graphical state current-language/available-languages
7
How to handle language detection and suggestion?
2
Best way to set user language
6
Fallback chain for Chinese languages
1
What percent of non-English-native people use English system language on their phone?