How to navigate between pages that show continous data?

I have an UI that looks something like the following wireframe. It shows data for a day, that is selected in another page in the app.

I wanted to add the option for users to switch the date from this page also. The data is shown in cards (that are also swipeable for some actions). 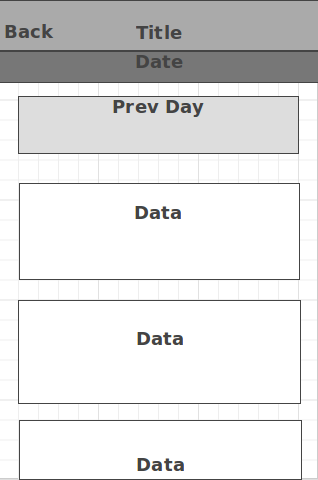 I added the card that is shown in the wireframe with the Prev Day text on it, and the user has to hold it for 1 sec for the date to be changed. Also there is a similar card at the end of the data for the next day. Those cards show an animations while they are pressed, that fills from right to left, respectively left to right and after 1 sec the data is changed.

The problem is that after releasing the app in alpha most users seem to expect the action to happen on a quick tap, and they are not holding the card pressed (they are tapping so fast that the animation is barely starting). I don't want to make the action available on a quick tap because it might be a lot of data, and don't want the users to tap by mistake.

I have thought of the following solutions:

Which one of the solutions should I implement, or do you have a better one?

Also, I think I should add an option to open a calendar, so you don't have to go day by day. I was thinking of adding it if you click on the date, but it will also not be expected by the users, do you have a better idea?

I think the pattern you want to reach for here is 2. The Android design guides call this pattern Swipe Views and apply it in scenarios such as yours.

On a phone, since the master and detail are on separate screens, this typically requires the user to jump back and forth between the list and the detail view, aka "pogo-sticking".

In cases where users will want to view multiple detail items in succession, avoid pogo-sticking by using the swipe gesture to navigate to the next/previous detail view.

I would advise against adding a calendar option on this detail screen because primary navigation is already implemented on your master screen. Following from the Swipe View pattern, swiping on the detail screen is a secondary navigation which is provided to the user as a convenience. Additionally, as you have already guessed, I think users will not expect calendar navigation on this screen.

A previous day, a calendar, and a next day.

You stated yourself that the app doesn't behave how users expect it to. Design around what individuals expect - trying to change their behavior creates friction. Friction means they aren't going to use your app if they don't have to.

If you're concerned about the data, you could possibly perform a check for the amount of data. If it exceeds a certain amount (e.g. rows, item count, etc) ask them if they are sure that they want to navigate to the previous day and warn them that it may take a while to load.

A technique called Virtual Scrolling can also be used.

Not the answer you're looking for? Browse other questions tagged usability navigation mobile-application or ask your own question.

2
How to show up heavy content on webpage
1
How to handle change in data types and relevant data values against it
3
How to obscure data in a screen captured image?
2
Best approach to show and insert nested data
1
How can I communicate that a list item is expandable?
0
Adding and deleteing from saved addresses. How would a user know that swiping means delete?
1
Showing a spinner for something that might not exist
4
Is it possible to use a Card component also for edit
0
Showing all-day or non-timed events in a task list
24
Will users know a CardView is clickable?