How to convey True, False, No Change to a user editing multiple items at once?

I am designing a tool that allows users to edit/update the fields of multiple tickets at once in a ticketing system. There are other categories users can update besides those listed below. This data is used for filtering, reporting, and accounting.

These are internal users who work with these fields on many other interfaces and are used to these boolean options being displayed as a series of checkboxes.

Because the users need to adjust multiple tickets an additional state "no change" along with the ability to set all the fields to true or false is required. I am worried that users will be confused by the change in the interface and the third option. I am hoping to find a solution that is a little more intuitive.

1) Is there a standard (or better) UI component that lets the user decide if they want to make a change and then the true/false choice?

2) How can I make the "No Choice", "True", "False" more user centric? I realize the true/false is much more system speak than user speak. 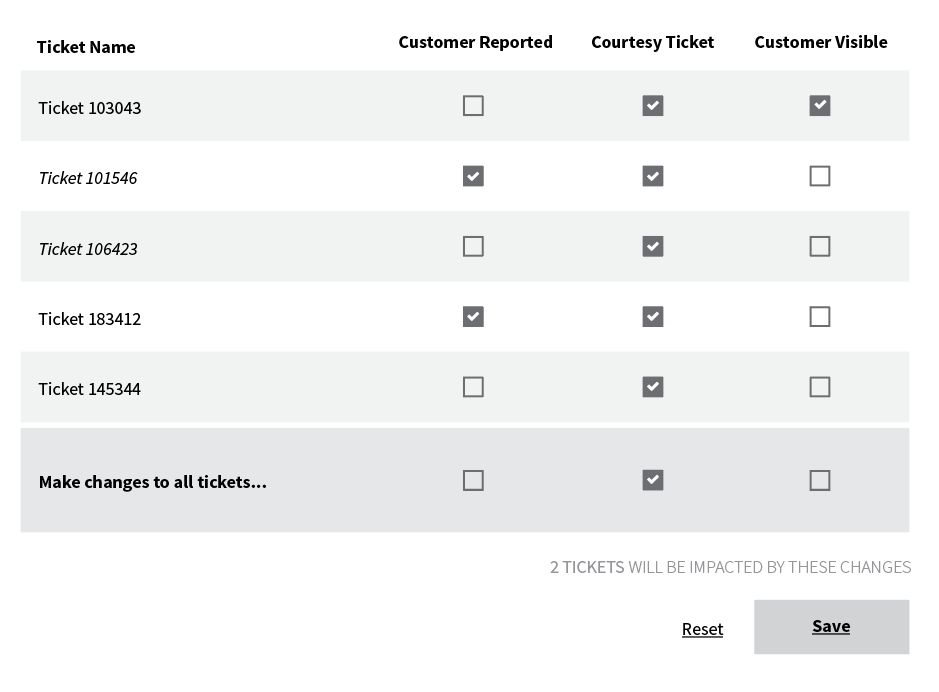 Checking a checkbox in these bottom controls would check the respective checkboxes for all tickets. Likewise, unchecking one would uncheck for all tickets. You would need to 'reset' to go back to the original state.

But how do the users know which values have changed and their prior value?

Do they need all that information, particularly the prior value? They might only need to know which tickets have had values changed in some way.

Italics on the ticket name could be used to denote that a change has been made and is pending save. User testing would reveal if that is clear (alternatives could be a star symbol next to the ticket name, or a clearer 'modified' label).

A succinct summary of the changes made also alleviates some of the fear of dealing with large sets of elements. For example "2 tickets will be impacted by these changes"

A 'reset' action may be sufficient for them to go back to see previous values and recover from mistakes.

Another way you could go, maybe if you didn't want to see the individual tickets (or even if you did), is to use a feature of a UI component which is a bit less known: the 'indeterminate' state of the checkbox component. It's typically used to denote that the associated child elements vary, and can't be represented by either a true or false value alone.

One thing to keep in mind as well if you intend to use it in a web interface:

The images that you show does not make it clear what the original value was in order for the person choosing an option to know whether there is a change or not.

Would it be possible for you to:

If you have to report back out, you could then show which fields changed, and what they changed to.

I wouldn't include a "no change" choice, since it'd be redundant at best, and possibly quite confusing.

The entry conditions must be true set, false set, or (perhaps) neither set. So the real "no change" is that they simply don't change whatever the current setting is.

If it's really a binary true/false choice, then you've to get the person to choose one, unless you can safely default to one and tell the person to make any changes needed.

If you're concerned about visibility for an outlier, you could reverse out that item's field.

Not the answer you're looking for? Browse other questions tagged checkboxes user-centered-design editor edit or ask your own question.

0
Checkbox having effect on another checkbox
1
Interview methods for user needs phase
3
How do you display pending changes in a form?
1
What's the best control to toggle between three states?
1
How to create appropriate user flow for multiple choice pop up modal windows belonging to side filter bar?