Solarized is a color scheme for editing code that reduces brightness constrasts while maintaining hue contrasts. It claimed that this reduces eye strain.

Is there value in optimizing a color scheme like this?

Is there value in optimizing a color scheme like this?

Yes, I think there is. We are a colorful bunch with different perceptions, cultural differences and aesthetic preferences. As so color speaks to us and might make our work easier or harder. This does not mean, however, Solarized is perfect for everyone. Let me give some support to my opinion. 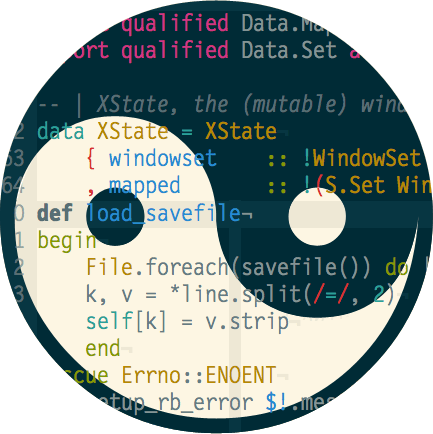 First of all notice that its a likely scientific hypothesis that different people see different colors for the same stuff. We are still unsure of what are the reasons that lead us to perceive color the way we do. Perhaps the most striking comparison I've seen is the Himba Tribe color perception (Namibia) and I quote:

A researcher named Jules Davidoff traveled to Namibia to investigate this, where he conducted an experiment with the Himba tribe, which speaks a language that has no word for blue or distinction between blue and green. 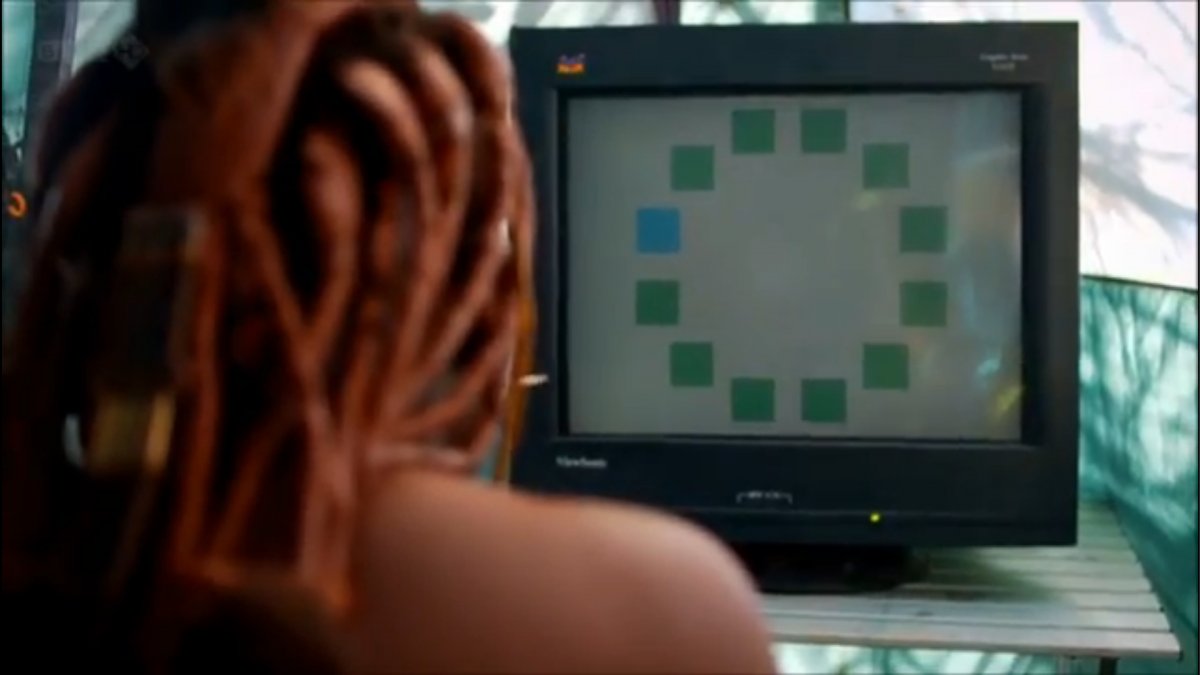 When shown a circle with 11 green squares and one blue, they could not pick out which one was different from the others — or those who could see a difference took much longer and made more mistakes than would make sense to us, who can clearly spot the blue square.

But the Himba have more words for types of green than we do in English. When looking at a circle of green squares with only one slightly different shade, they could immediately spot the different one. 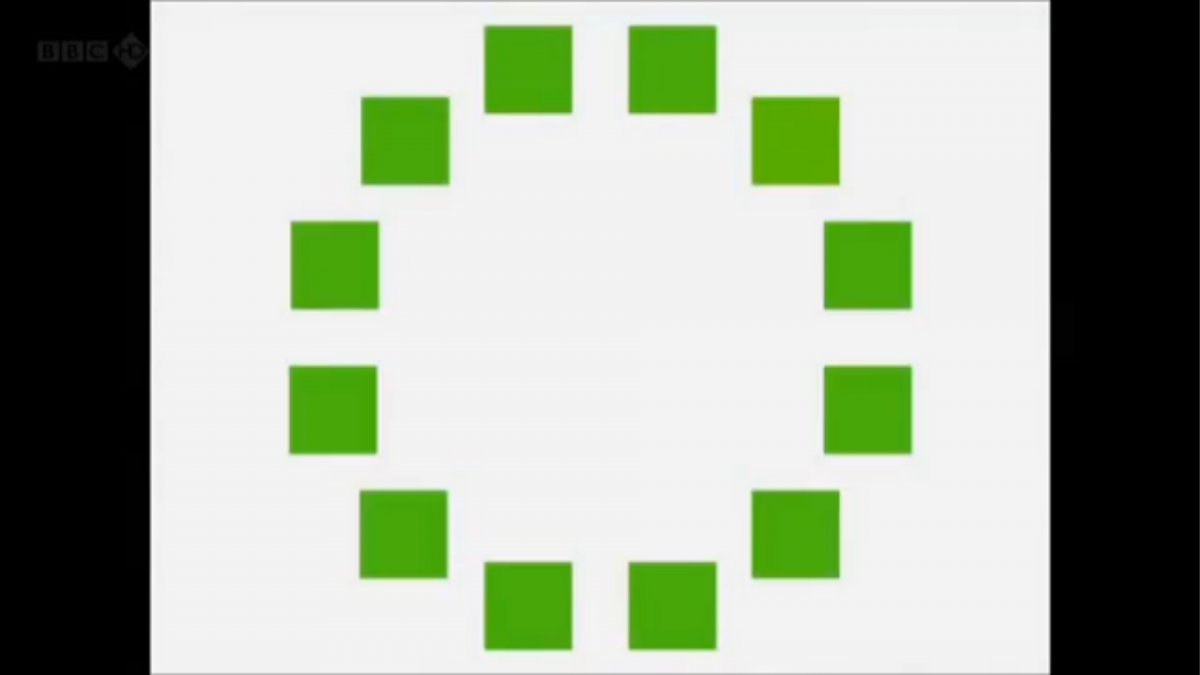 Personally I can only see the different color with great difficulty. For me green and blue have always been different colors by language. For the Himba, green and blue is the same thing. So, at the very least, language seems to matter in our perception of color. If we where to make matters even more complex we could even speculate that different people have different gamuts (see this), besides the well known condition of color-blindness.

Also you should notice that equipment differ on their ability to produce color. That being said you could argue that Solarized is a good color scheme due to its success. If more people use it than its likely better than the alternatives (for most at least). Personally I find it a good color scheme although its not something I care deeply when coding.

I cannot say all of it is fact but I think we can all agree Ethan Schoonover gave some thought about this subject and that makes it more of a specialist than most.

I think the biggest problem, though, is that the projection of color is in no way standardized. You see, right now I have in front of me two screens of the same brand and model and specs. I can still notice the difference in color.

A last comment would be the base for Schoonover work: the Lab Color Space and I quote:

Unlike the RGB and CMYK color models, Lab color is designed to approximate human vision. It aspires to perceptual uniformity, and its L component closely matches human perception of lightness, although it does not take the Helmholtz–Kohlrausch effect into account. Thus, it can be used to make accurate color balance corrections by modifying output curves in the a and b components, or to adjust the lightness contrast using the L component. In RGB or CMYK spaces, which model the output of physical devices rather than human visual perception, these transformations can be done only with the help of appropriate blend modes in the editing application.

Because Lab space is much larger than the gamut of computer displays, printers, or even human vision, a bitmap image represented as Lab requires more data per pixel to obtain the same precision as an RGB or CMYK bitmap. In the 1990s, when computer hardware and software were limited to storing and manipulating mostly 8-bit/channel bitmaps, converting an RGB image to Lab and back was a very lossy operation. With 16-bit/channel and floating-point support now common, the loss due to quantization is negligible.

In addition, many of the "colors" within Lab space fall outside the gamut of human vision, and are therefore purely imaginary; these "colors" cannot be reproduced in the physical world. Though color management software, such as that built into image editing applications, will pick the closest in-gamut approximation, changing lightness, chroma, and sometimes hue in the process, author Dan Margulis claims that this access to imaginary colors is useful, going between several steps in the manipulation of a picture.

There are scientific articles that make up the base of the Lab system (see References section of Wikipedia article). I have not read them and do not know if any criticism exist. In any case its true Solarized is today widely used, I would guess its because most software houses noticed user preferences.

EDIT: I feel that perhaps a better explication for the Himba case study is required (although a bit out of the scope of the question).

...SO A BIT MORE ON COLOR PERCEPTION

The problem posed with language and though is that the way we engineer language might affect the way we perceive things, notably color. We know the color spectrum to be continuous:

Electromagnetic radiation is characterized by its wavelength (or frequency) and its intensity. When the wavelength is within the visible spectrum (the range of wavelengths humans can perceive, approximately from 390 nm to 700 nm), it is known as "visible light".

, and that any categorization of it either comes from one of our physical attributes or intellectual. It has been theorized that the last hypothesis is actually relevant. As an example (and not an accurate one, I'm just trying to illustrate the problem) I'm showing two ways of categorizing a problem in the next figure. 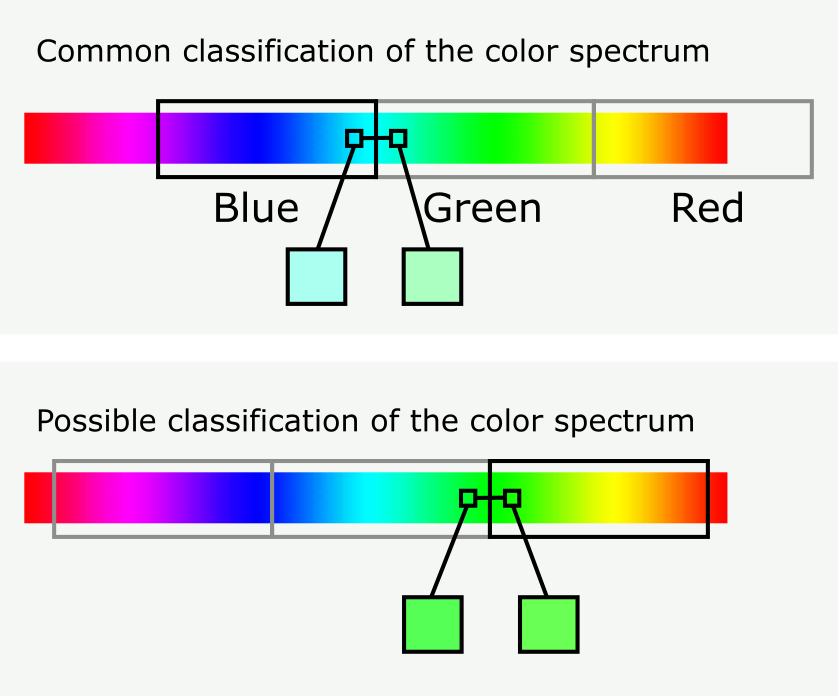 This is the actual problem posed by the study that included the Himba tribe case study. If we group colors in different ways by language, will it make a difference in how we perceive them? The study says that apparently yes.

EDIT: An interesting video article I just came across has some relation with this subject: The surprising pattern behind color names around the world

This might sure be useful for some users, but a simple gray scale test gave me this:

Conclusion: As you can tell, for those of us who have no problem seeing colors, Solarized might be a good color scheme. For the rest, you might want to reconsider that option.

This is all very good stuff. I think the proper answer, however, is to know your audience and understand that in general, low contrast is harder to read. I could give you any number of academic references here - a good starting point is "Influences of Contrast Sensitivity on Text Readability in the Context of Graphical User Interface" (Parker and Scharff, 1998) - but this is also just good common sense. If you have an older audience, contrast senstivity will be a larger issue than if your users skew younger.

Knowing how the luminance values of color relate to contrast and readability is also an important consideration (as was previously noted obliquely in the Original Colors vs. Grayscale post), so keep that in mind!

7
Tablet interface design when used outdoors - handling bright light
6
Are dark non neutrals colors suited for page backgrounds or is it more advisable to go for neutral colors like black or dark grey?
10
Effect on usability if I use green and red colors (for meaning) in an app whose color scheme does not include those colors?
8
Range of Colors to Represent Values
47
Which color scheme to choose for applications that require long work hours?
0
Using a color scheme to represent a combination
4
Specifying semantic colors in design manuals
1
Color Palette Accessibility for White Text Button Labels
2
Spreadsheet Cell Color Conventions