Why are there no arrow keys on most mobile on-screen keyboards?

When typing on smartphones or tablets it is very cumbersome to move the cursor to a different position. Why is it that the onscreen keyboards on these devices usually don't have left/right arrow buttons to move the cursor?

So far I could only find the arrow keys in the onscreen keyobard of tablets running Windows 10: 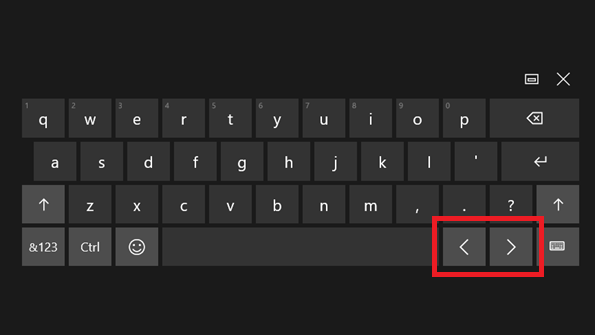 Mainly space. Android deals with this issue by allowing you to us a gesture dragging along the Spacebar to place the cursor right and left retainer to its current position. Not obvious, but it works well.

Mostly a real estate issue, however on some devices, or larger devices they are available, and a welcome addition!

On the Google keyboard on Android, you can swipe left/right on the space bar to move the cursor.

On a personal level I would LOVE to have some better options on iOS to navigate around text content (the magnifier is horrible near the top of the screen (you can't see) and requires you to click and drag right on the caret placement vs. some much larger hit target. Luckily there are replacement keyboards that provide additional behaviors like this, unfortunately the default ones are not incorporating the most desired features back into their default keyboards.

Because it's easier holding on the address bar and move the cursor than tapping arrow button several or more times. If you want them, you can use SwiftKey Keyboard which places arrow buttons the bottom of the keyboard.

Because touch screens are based on the paradigm of touch control. Adding arrows to allow positioning is redundant, because you're supposed to set your position with your own fingers. Rather than tapping x times to set a coordínate, you can move along not only one axis, but 2, rendering the arrows superfluous.

However, leaving the paradigm aside, it's true that many devices have some important issues at the time of implementing tbis. As an example, I'm writing this on an iPad and I'd love to have these arrows since iOS text edition capabilities are really sub par.

Bottom line is that this won't change. In any case, implementations have to be better.

While there might be good reasons to do what you say since there are obvious flaws, you can't expect that the different operating systems will decide to go back in history. There's an standard, and if anyone wants to move from the standard, there are apps to modify different behaviors.

Because they're redundant. They're the pancreas of the computer world.

Their original purpose was in pre-mouse times for moving the cursor. Once the mouse was invented and solidly took control of this job they were already an established part of keyboard design and try as Apple might, they weren't going anywhere.

The actual uses that arrow keys have on modern PCs are thus fairly limited compared to their original use, and they may not even be incorporated if we were (100% theoretically, not at all practically) completely designing a keyboard from scratch, the only big exception that comes to mind being in document editing, where they help users to avoid switching between two input methods.

What uses the arrow keys do have- moving your selection on windows explorer, scrolling the browser.... these are far more easily done by touching on a phone- where it is feasible to imagine something may be stopping you from using a mouse on a PC there's no way you won't be able to use your hand on a smartphone.

I suppose one can see parallels between the development of desktops and smartphones- remember that in the pre-smartphone era phones DID tend to have physical arrow keys for selecting options....But with space being finite, complete hardware redesigns being standard order of the day and a lack of need it was far easier to remove them on a phone than a desktop.

Not the answer you're looking for? Browse other questions tagged interface keyboard or ask your own question.

6
Unintuitive order of vi directional keys
17
Why is the caps lock key often so big on a keyboard?
11
Why do keyboard keys have (most) letters in top left corner?
8
Why Greek letter mu (μ) on European keyboards?
3
Is it okay to map the left/right arrow keys to a website's navigation?
0
What are the proper keys for navigating multi-column "search as you type" results?
7
Why is there no standard layout for computer keyboards?
4
What would be a better typing experience in landscape mode of a keyboard?
4
Why are keyboard numpads on the right-hand side?
0
What are the options beyond the keyboard, for truly good quality text input?