I'm designing the ways to ask users to provide some feedback on the app. We choose to embed polite "Would you mind giving some feedback? [yes/no]" directly into users' content and will test sticky in-app notification as well. But I also want to give a voice option to those who chose to leave the application (in accordance with Exit,_Voice,_and_Loyalty theory by Albert O. Hirschman).

As a an additional way to get few more replies I'm considering to navigate user to standalone page (see screen from the right below) in cases when user taps Androids hardware back button when current view is the only view in navigation queue. In other works instead on exiting from app user will land to the Feedback request screen. 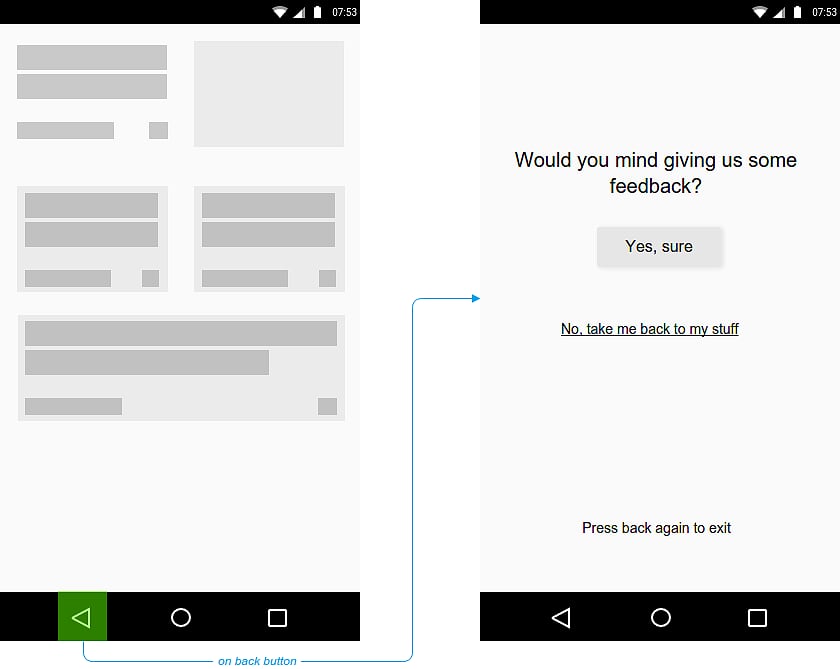 I'm interested in hearing ideas and objections on this design. How bad is an idea to basically ask for exit confirmation with this utilitarian twist?

These are the anti-patterns I see in your proposed approach:

Subverting user intention: The user indicates they want to do one thing (exit the app) and you substitute a different task (asking for feedback).

Highly interruptive: A likely reason a user would be quitting an app is because they really need to do something else right now. Interfering with this degrades the UX of the whole device. ("I need to quit this app to take a picture! But the app won't let me out! Now the world will never see the majestic yeti")

...of a highly standardized task: You're talking about overriding the operating system UI and even the hardware interface here. That's not something to be taken lightly. Exiting an app is something that should work consistently across all applications; your app breaking that contract will be disorienting to the user.

Garden pathing: The "exit" button brings up a page with two links: give feedback (not what the user planned) or "return to my stuff" (the opposite of what the user planned). The user has to read the fine print to figure out that to do what they planned -- leave -- they have to hit the exit button twice. You are really pushing the user away from their intention and towards that feedback form, to the point of obnoxiousness. (Seriously: that's skillful design work, I'm impressed, but you're very much playing for the dark patterns team here.)

The wrong question anyway: You're trying to get feedback from those who choose to leave the application -- but quitting an app doesn't necessarily signify that; it usually just means the user is task-switching. If you want the "Exit voice" you should attach this to a "delete my account" workflow, or equivalent.

I think having a method of receiving user feedback is great, but realize users will more than likely not give it (especially if there isn't any kind of immediate benefit for them).

Consider the circumstances in which the user reaches this prompt. It appears when the user is leaving the site. The goal of the user is to exit the page, not to voice their opinion. Sure, you might get some users that give feedback, but it's going to be extremely low. Be sure to provide the user the same feedback ability elsewhere in the app.

I don't think having it like this is not necessarily a negative, but just keep in mind that the likelihood of users actually giving feedback is not going to be high.

On the run, I as your end user, will most likely just go "home" when I am done with the app for the time being, this instead of selecting some kind of "exit" or "back" feature. Therefore, I cannot se any situation where I will be prompted to leave any feedback.

If you trigger that feedback form when I am in your app and pressing the home-button or when I switch to some other app, this will be very annoying making me uninstall that app as soon as possible.

So, in what situation are you going to trigger that Yes/No modal? Perhaps randomly ad the app start.

Not the answer you're looking for? Browse other questions tagged mobile android feedback user-feedback close or ask your own question.

6
Standard image for the Android back\up button
4
when designing an app for both Android and iPhone, should the user interface be the same?
23
Asking feedback/rating for a mobile app?
8
When is using haptic feedback for button presses a good idea?
10
Should I remove a back button from the UI considering every Android phone has a hardware back button?
7
Navigation drawer and hardware back button: when on root level, exit app or go back?
13
Get User To Click The Feedback Button
2
What kind of feedback is appropriate to inform the user that he's actually offline for a mobile app interface?
1
Best moment to ask for feedback why the user is not converting?