Why the 360x640px resolution is currently the most used one?

Recently, after checking which is the currently most used resolution among all devices I was surprised to find out that we have a new leader - the 360x640px resolution. 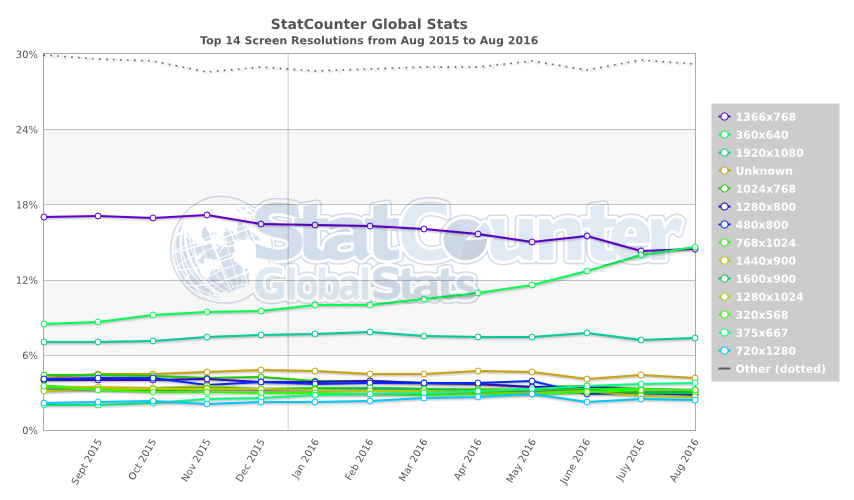 This is obviously mobile resolution. However, after researching which devices operate at 360x640, there is not much of them. The majority of current mobile devices use 1280x720 or bigger. So:

What causes the surge of the 360x640 resolution? 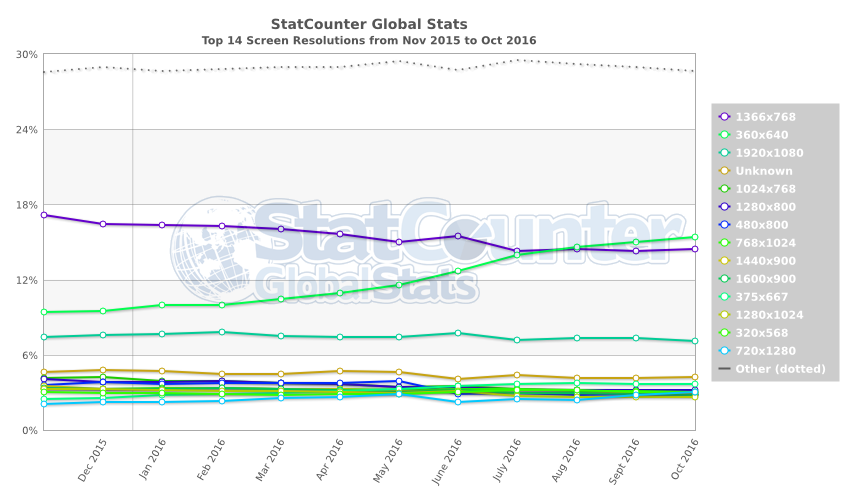 The mobile resolution has already significantly passed the desktop resolution as the most used one.

High-density screens can be a bit confusing, a pixel isn't just a pixel anymore: the actual pixel count is a multiple of the declared pixel count.

That particular resolution is common because it's the simplest math for HD formats:

Switch the chart to resolution for mobile only. 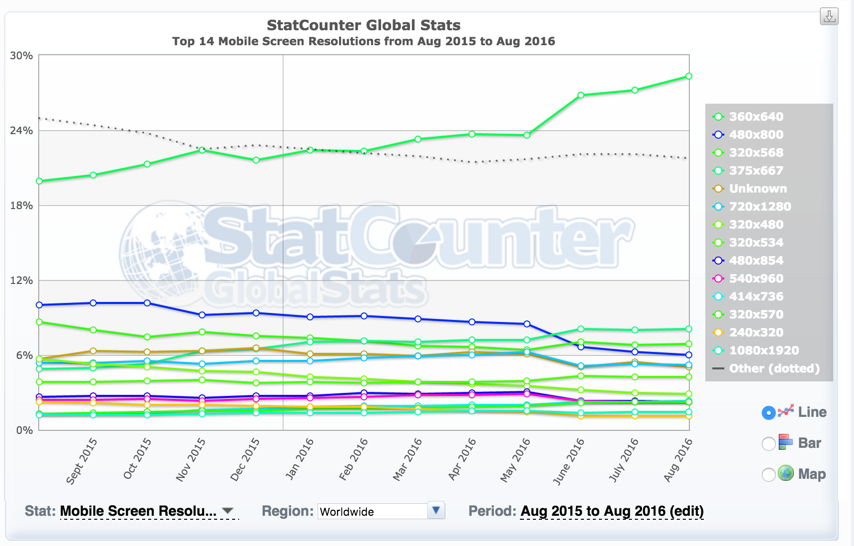 There's your answer. Mobile Phones (whatever statcounter classes as such) are skewing the results (well, it's not really skewed as it's correct).

Mobiles are being used more and more for accessing the web. This just illustrates that.

According to this page, Samsung S3, S4 and Galaxy Note are such phones, and are the top selling android devices currently. And android market share far eclipses iOS.

An additional setting on StatCounter shows that Android is the top OS across all devices (mobile, desktop, tablet...)

Note: There may also be some quirks with how mobiles declare themselves to the sites. Retina / HD screens may claim 640 x 460 so that it doesn't display as really small / zoomed out versions. Screen resolutions in this day and age aren't as black-and-white as they used to be a few years ago. A bit like cameras with their Megapixels - it's a stat that becomes less meaningful as technology evolves.

Think PPI instead perhaps. Screen resolutions are now making PIXELS the same as print DPI. (= Quality of definition)
Once upon a time* pixel size related to physical screen size as all screens were the same resolution. Now screens are higher in resolution allowing more of the pixels to fit in a square inch. DPI = Dots Per Square Inch. Screens = 72dpi(ppi), Newspaper = 150 DPI, Typical Magazines = 300 DPI

Not the answer you're looking for? Browse other questions tagged mobile screen-resolution or ask your own question.

61
Should users be forced into a responsive design (without the ability to opt out)?
1
Choosing the right resolution to target for the mobile web
4
Navigation on a desktop website targeting mobile-friendly users
20
What is the generally accepted resolution for mobile design?
0
Testing responsive websites for cross browser compatibility
21
What was the reason behind total transition towards wide screen displays by the manufacturers?
8
UX strategies and its implementation aimed at preventing RSI in mobile apps?
1
Responsive design - Most common resolution steps
2
Ribbon UI on mobile devices
0
Absence planner - UX thoughts and recommendations