I need to display a large number of "policies" in a list context for user selection and inspection. Each of these policies may have two versions live at any given time, one on the staging (or testing) network, and the other on the production (or live) network.

Policies must be created and made active on the staging network, then once they are active on staging and properly tested, they may be pushed (without modification) to the production network, where they become live for the world to see.

Two of the same policy on different networks are, in fact, two entirely different entities, so we need to show details for both of them, since they might differ. They also need to be independently accessible for viewing and/or editing (policies on production can't be edited only viewed).

It is possible that a new policy may be active on Staging but not yet pushed to production; in this situation, the policy literally does not exist on the production network yet, so there is no version there to display in the list.

Because of this the default has been to display the same policy on the two networks each as their own line. This can, however, lead to a somewhat inconsistent-looking grid (which is also inconsistent with other tables in our interface, which almost always have a single line item for each named entity): 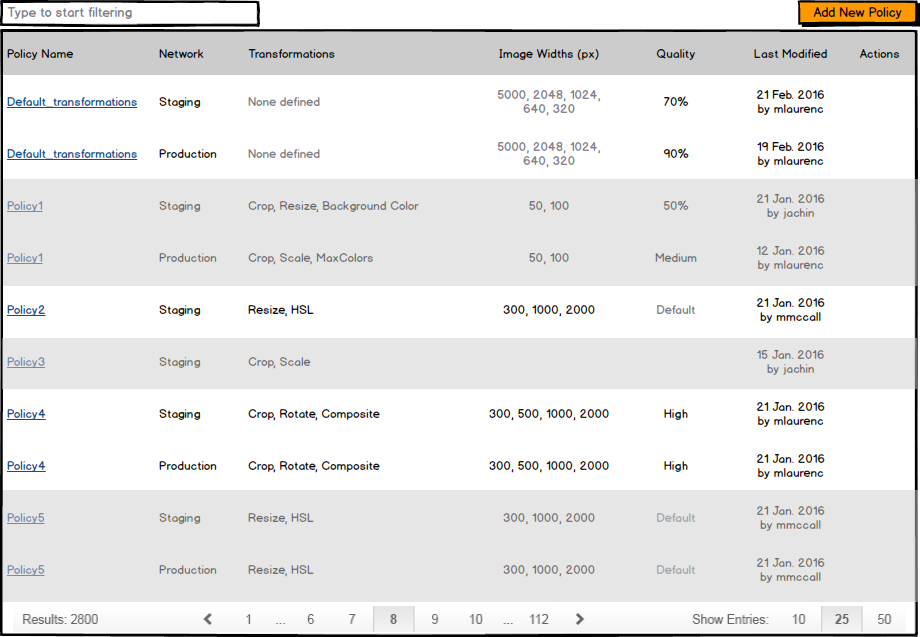 Having two line items for some policies and one for others has mildly confused some people, since they don't see this anywhere else in our system. We've tried to overcome it by grouping policies by table-row background color, but it only seems to make things LESS clear.

I would love to get people's ideas on what the best way would be to display these in a more consistent way. Without worrying about feasibility around back-end or front-end code, what suggestions might the community have around this? A tabbed panel for each network showing just those policies? Collapsible table rows with high-level info for each policy in the collapsed state, and details for each version when expanded? Just showing the name once but still having two rows for policies with two versions? A single row with a representation of each network that gives more information upon click or hover? Should there be versions of policies and the liveness on each network tracked at the version level below this? Would it be any clearer if we left it the same but just took out the table row shading?

We've considered all of these options, and each has pros and cons and level-of-effort-or-available-info-from-the-back-end issues. But from a sheer user standpoint and your initial gut feelings, which of these - or others - might work best?

So after quite a bit of horse-trading, convincing, working with the central component team, and mostly overcoming inertia, changing the data model was still too much for the team to stomach.

But using my mystical, arcane mind-manipulation techniques (and showing them the results and comments from user testing), I convinced the front-end team that we could use expandable table rows (a component enhancement that took several months to convince the central team to build). This let us simulate a single policy per table row (even though there are actually two with the same name, one each on staging and production), and show more detailed information for the two separate policies that are ACTUALLY being represented upon expanding the row. You can see this in the third Custom Policy line item below: 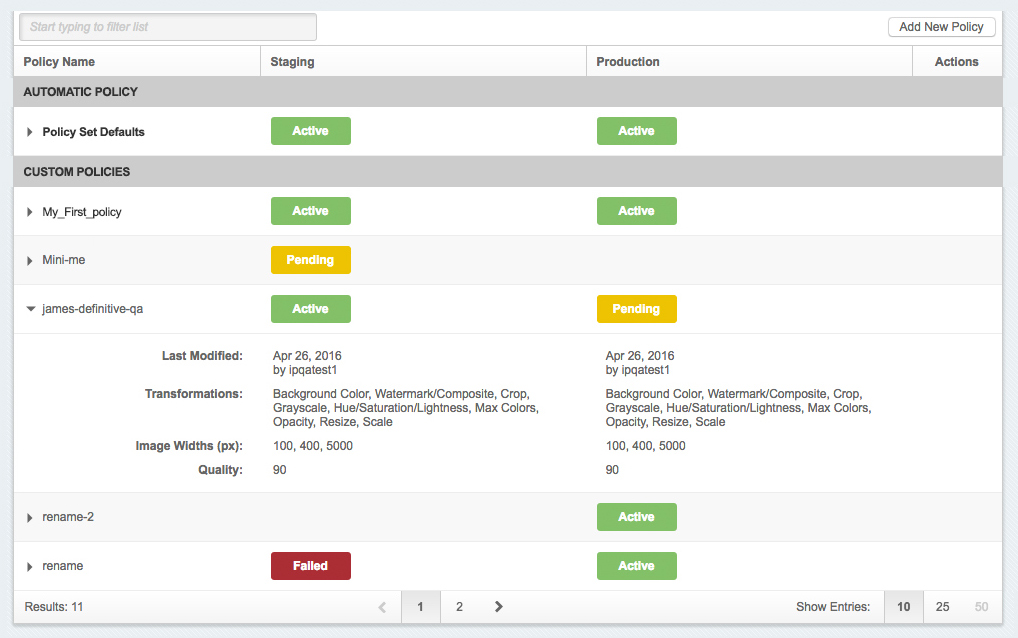 Since this is a mock-up and not live not all controls are visible here, but you get the idea. So far this has been very well received, but that is only internally; I hope we will be able to do another round of user testing soon and verify that this makes more sense to people!

Not the answer you're looking for? Browse other questions tagged tables grid data-tables or ask your own question.

5
Advice on applying different kind of tasks on a grouped table
9
Best way to show long list of detailed information for summarized items in a table?
0
What is a good way to display a ranked list in a table cell?
4
Tile vs Table/List view: Do they need to display exactly the same information?
5
Best way to display date and time in a table with massive amounts of data?
0
Wrap or truncate long tabular data?
0
How to display different categories and their totals in a table
2
How to download the same item in different file formats, and an optional additional item?
1
States and behaviour for progress bars embedded in tables
1
Table - list view and details view