Usage of emojis as compared to stickers

The rise and uptake of IM applications has created some interesting ways for users to communicate with each other, with the emergence/popularity of emojis (which could be said to be an evolution of the emoticons) and stickers being the two that comes to mind for me.

However, since I am not a very active user of social media platforms, I am curious as to what the difference between emojis and stickers as they are used in IM applications. The two things that I notices are:

What other differences have people noticed?

The main difference between stickers and emojis is that emojis are Unicode based and they're universal and controlled by the Unicode Consortium, meaning that the same code will be parsed by different clients, and it will always represent the same idea, even though different clients may display the emoji differently. See an example of a few emojis as displayed by different vendors (image from Mashable) 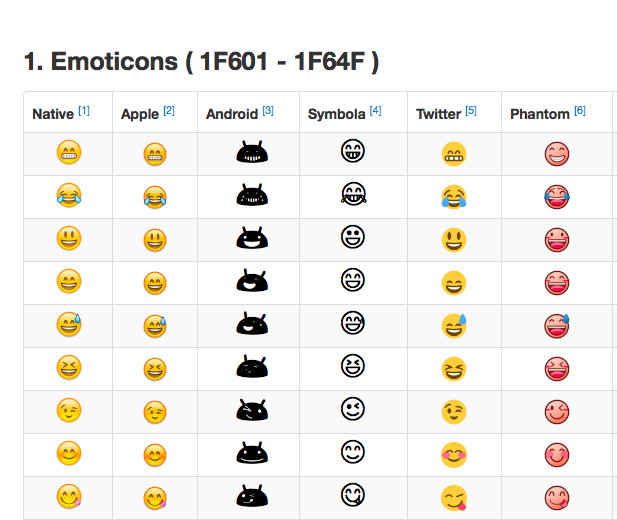 Stickers are a different story. They're not universal and they're not controlled, therefore there's not a version for each vendor. While they might be represented by code, this code can't be parsed equally by all clients. Instead, when you send a sticker, the receiver will get an image.

You noted the more size-restricted nature of emoji... I believe they are meant to always fit within a normal flow of text. In my own little universe, if it is bigger than a line of the text around it, it is a sticker, not an emoji. This, to me, is one of the key differences. Emoji can usually still work in content within a paragraph of text, whereas stickers tend to stand on their own.

Also, stickers are more and more including animation (and text, as you noted), which are notably absent from "classic" emoji. Emoji also tend to look much more like pixel art than the more ambitious graphic rendering of stickers, mostly by nature. But again... if it is notably larger than the line of surrounding text, I would classify it as a sticker rather than an emoji.

Note: While emoji are, as you note, evolutions of emoticons, there is obviously a broader range of emoji, and many tend to be more about ideas/actions/situations than just emotions. Emoticons, too, have evolved to accommodate a wider range of meaning (hey, table-flipping anyone?

But on the whole the pixel art of emoji can carry more meaning as a body.

I have always related the latter ones with the Stickers you could buy to add to your printed photos in the 90s, something like a text bubble saying "I love U" or "Best Wishes".

Not the answer you're looking for? Browse other questions tagged emoji or ask your own question.