Slider with 3 handlers vs Input fields

I am working on a feature were you need to distribute the total of the feature value (100%) between 4 factors, I think the best option is the input fields, but I like the visual feedback from the slider, any suggestion? 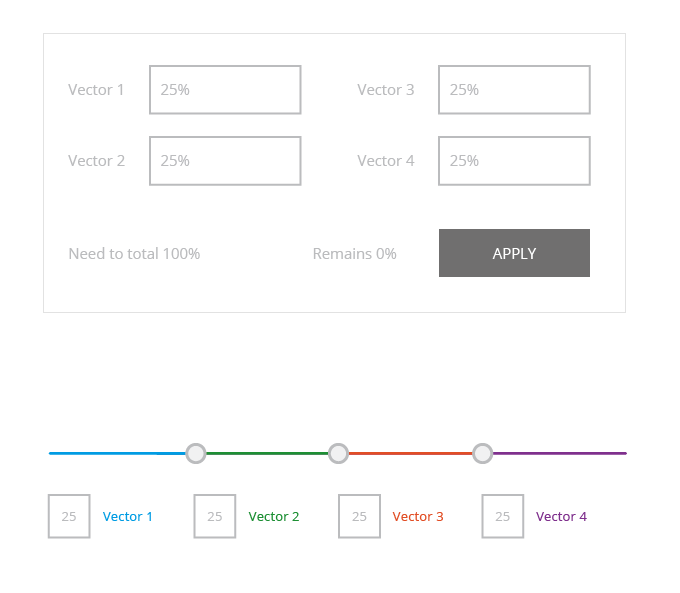 The slider design as shown above could be incredibly confusing from an accessibility standpoint. What if someone could not properly see the colours?

What happens when vector 1 needs to be 25% and vector 2 needs to be 26%? That seems like some very tedious mouse dragging.

Using form fields, you can quickly tab to each one or after a value is filled in, automatically move to next form field.

This is precise work, I think direct number entry is the best choice.

However, if you want something more visual, show a graph or something of how the 4 values are distributed across the 100%; for example, in vector 1, they enter 25%. Draw a graph then that shows the progress left or something.

I think your slider could certainly work, but a) I fully agree with the color accessibility issues, b) make sure that the slider track clearly represents 100% regardless of the position of the handles, and c) you might change a few things around a bit to make the associations clearer:

Keep the fields and vector names centered (as much as possible) over/under their related segments (they could both be over or both under, whatever), and don't let color confuse the issue. I also wouldn't use any light grays: low-contrast controls are NOT cool, they are just harder for a segment of your customers to use.

Using bar-chart that auto-completes to 100 can work better. Connecting them on a linear scale is more complex action than deciding on each variables. when you increase one, automatically decrease the neighborhood variable.

You can add unassigned percentage bar, to make things a bit clearer...

I think that you're spot on with the form fields being the best way to get user entered data, it's not as difficult as trying to move around handles on a bar; I'm thinking Fitts' law. No reason you couldn't have both though.

As for displaying the information, a bar graph works well, or a 'donut' graph might also work. I like this idea as it shows a complete circle so you can easily see it total up to 100%.

If you wanted to stick to a linear slider/bar, I would just recommend using and 'end point' indicator, so you could see if the 100% total wasn't reached, and obviously use something other than just color to distiguish between the factors.

Not the answer you're looking for? Browse other questions tagged input-fields sliders or ask your own question.

14
Should a special slider value be implemented with a checkbox or not?
6
Automatically limiting or correcting numeric input field values
1
Allowing user to input a range value where end points have special meaning
4
Does A Slider Control UI Element Like This Exist — The Joystick Slider?
1
What is the best way to input cm of body measures?
1
What's that “chevrons” mouse-like “not a slider” interface?
2
Is a slider with multiple handles suitable for defining split points
1
Select and adjust individual and multiple (four) input fields both numeric and with slider
2
Age range slider for filtering
2
“Reset to Default” UI for Computed / Synced Fields