As most people know, red is a color used in many apps to display negative numbers, specially in financials. I also remember old calculators with paper rolls having that color by default for subtrahends.

Now, my problem is that we need to create an app where the request is to have this kind of treatment for negative numbers, and of course, red was suggested by the client itself.

But the client is an Asian bank, and its brand color is red. So I'm against using red because I know red is a good color for Asian people, not to mention is the client's brand color, so I can't use the brand color with negative connotations.

Thus, my question is: is there any other color or treatment we can use to display these negative numbers?

Finance is inherently a negative business. In finance, we assume that things will remain in the positive, so it's the negative trends that need to stand out.

The critical requirement is to facilitate the user's desire to quickly find negative values.

Even if red was a good cultural fit, it probably wouldn't work since the brand will be using that color elsewhere in the view. It's visual dominance is already compromised.

Black probably isn't right either, since most screens will be full of it (granted, in lesser density).

Orange may provide enough vibrancy (depending on the red in use), though it can be a challenge when it comes to balancing readable type vs muddy color. That said, it's probably the first color I'd test.

Another option, that opens the door a bit wider, is to use a background highlight rather than type color. Then something like yellow or an orange tint can be used with bold or darker type to compound the visual dominance.

Something along these lines:

The approach used in accounting is to indicate negative values by placing them within parentheses (or brackets) but without the minus sign, for example $(1,234.00) is a negative value while $1,234.00 is a positive value. So you could opt with that as an alternative and mostly acceptable and understood option.

To be honest, I'd be inclined to test both formats (the red v parentheses) with a couple of focus groups and see whether using the red is actually the issue you're concerned it will be. I say this because the client initially asked for the red and testing it may be useful in arguing your point or putting your mind at ease. Not to mention the fact that the app will target mostly Western users.

As for the 'highlight' suggestion by plainclothes, I do like this, but on the negative side (no pun intended) it would be an unexpected approach and could also cause a distraction when there are lots of negative values.

Another option may be to just leave the negative figures in normal black (e.g. -$1,234) and change the colour of the positive figures to something else and include the plus sign for them. Here is a quick mockup I've done using red for branding and green as the alternative colour for your positive figures: 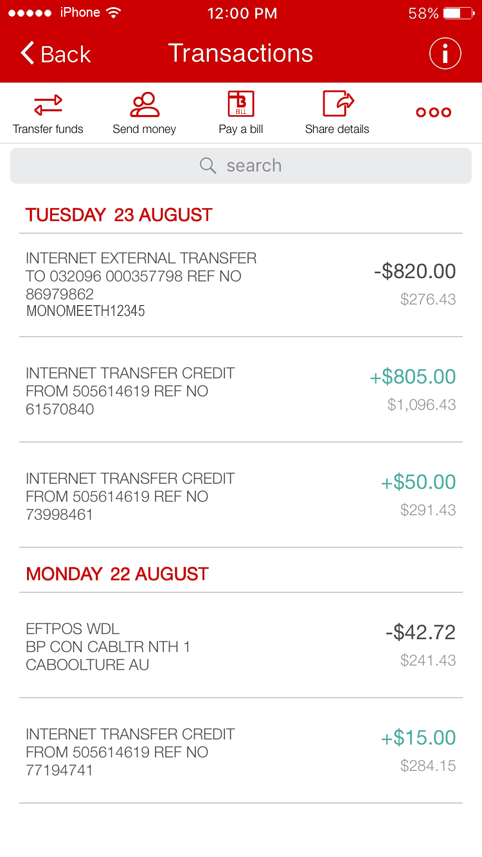 I'm not suggesting that green would be the right colour - but this approach may be worth considering because you'd find a colour that complements the red branding and which is also neutral (no-one would assume green or blue or whatever denotes a +/- value, but they could assume that red denotes a negative value). And, also explicitly including the minus and plus signs for all values would reduce any confusion.

Not the answer you're looking for? Browse other questions tagged color psychology math or ask your own question.

147
What are the negative and positive aspects of dark color scheme?
2
Appropriate color for updated row data
8
How accepted is the "Hooked Model" by UX?
4
How to handle color consistency when the color has both thematic and actionable reasons for the color?
3
Color for an inbound phone call vs color for an outbound phone call
2
Color for "Edit"
1
What color scale to use for heat map with positive and negative values?
0
Why most vehicle apps user orange / red color as their theme?
2
Recommended color range for background color