I'm talking about the "My Account" pages displaying current status and how long till we reach the next "level". (You know, usually you accumulate points to move from Bronze to Silver to Gold).

I saw Starbucks are doing a nice job. Do you have any other screenshots I can look at?

If you want something that is relatively intuitive, you can't go far wrong taking some inspiration from the MMORPG or other level based games (e.g. World of Warcraft) which give each character an experience bar to denote their level and indicate how far until the next one.

This basically depicts that the current level is on the left, with the desired level on the right. With a graphical bar representation of the progress stretching between (denoting the percent complete). Then either within, on-hover or beneath, the fine grained detail about how many air miles they need to complete until the next level.

While not probably relevant for flying, if you have consistent increments, you may find it better to depict as those instead. E.g. flights probably differ in the number of airmiles gained per flight. But if you do it simply on quantity of flights (rather than distance), you could say "6 more flights until next level". If you so wish, you could change the bar into an appropriate number of icons (e.g. aeroplanes) that "light up" (un-fade) as you progress through the level. 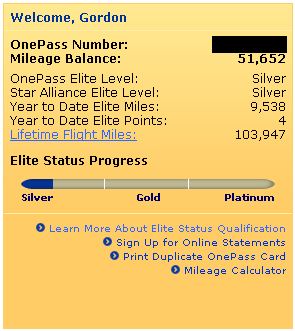 The screenshot above is what I see when I log into my Continental Onepass account. I think that for some users, the placement of the progress-bar labels could be confusing. You might think that in my example, I had already reached silver-level, when in fact I'm only 30% complete. I roughly mocked-up a possible solution to this problem. See below:

Not the answer you're looking for? Browse other questions tagged gui-design web or ask your own question.

0
Opening popup and pages in a new browser window is this a good usability practice for a web application
0
examples of user feedback for evaluation of other users' answers
1
Design idea for Multiple level pages
0
UX question for pricing packages pages
7
Separate administration pages vs. front-end integrated administration
3
UX Parameters for Interaction Design
2
Background Grid lines in charts are good or bad?
1
One product customized for multiple brands- any good examples?
2
Good examples of UI patterns for data assembling