I am working on an iOS application, and I was wondering how my alert should be. The alert asks the user if they have finished adding the info. As the info cannot be edited later, I wanted to make sure that the user did not accidentally press the button.

As you may have noticed with iOS alerts, developers have the option to bold an action, using the cancel style. This option is generally used against destructive action, such as: 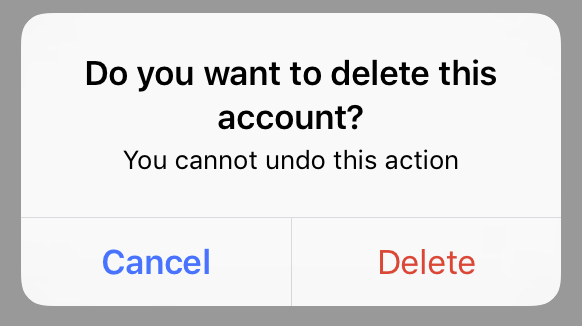 In this example, the action on the right is destructive and the one on the left is cancel.

You can also have default actions: 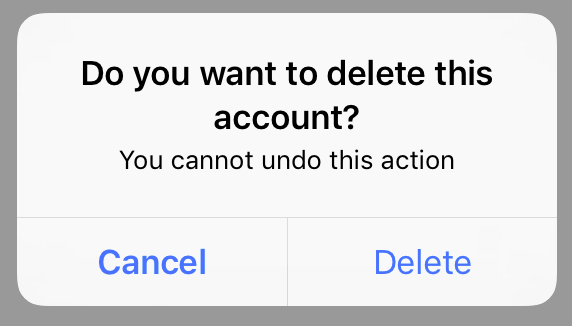 In this case, the action on the right is default, and the one on the left is still cancel. Here is the scenario I have within my app: 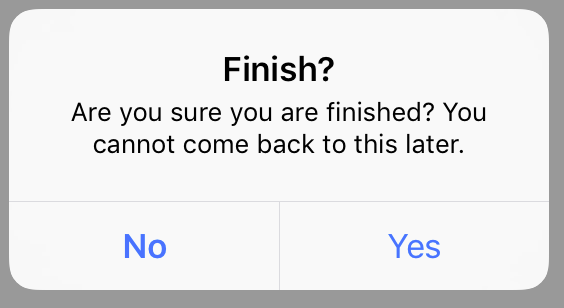 Which action should I put the cancel style on? Thanks!

I don't think making an Option bold makes much of a difference once the action has been taken. Is it possible for you to have a confirmation dialogue after or before this? Ask the user 'Are you sure you are done with the editing' This action cannot be undone'. If the user clicks yes or 'proceed' then show them the final action. I am done with the editing and give the option to 'Save' or 'Cancel'.

I'm not clear on what the actual functionality is but if the form they just filled out will be deleted the Delete button should be used because it tells the user there is no going back and the information they entered will be gone forever.

Although using your first two options doesn't make any sense, if I understand correctly. That alert would be useless unless it is coming from a Delete button. All destructive actions should be in red.

It sounds like what you want is to be explicit in what will happen with each alert button after they Submit. So I would keep the colors blue and on the left say Edit because that is what they will be doing. If you say Cancel they might not be sure if it will erase their data that they worked so hard on filling out and then bring them back or to another page. On the right I would confirm their action by reiterating that they are submitting with Submit on the right. This way they know they can not go back. Depending on your users, ubmit is commonly known as an action that you can not undo. Save would tell them that they can edit it later.

It seems to me that the confusion that may be caused is from your button labels, not the bolding style.

You mentioned in your question that "I don't want them to accidentally submit it".

Are you sure you would like to submit this (something)? You will not be able to make further edits.

Each action button now describes its action independently of the alert's descriptive text, which makes processing the alert simpler and clear to users.

In addition, the "cancel" button style now feels natural alongside its associated style.

Not the answer you're looking for? Browse other questions tagged ios alerts cancel or ask your own question.

1
Should I put an alert view notifying the user of a successful wall post with the Facebook SDK in iPhone?
2
Message and button labels in iOS Alert view
3
Confirmation dialog button wording
4
Application color theme and alert notification colors / status colors
0
Affirmative action button on right, Dismissive on left ...... unless affirmative is destructive?