Where to put context-free controls in a tabbed UI?

To illustrate what I am meaning, let's look at an example: 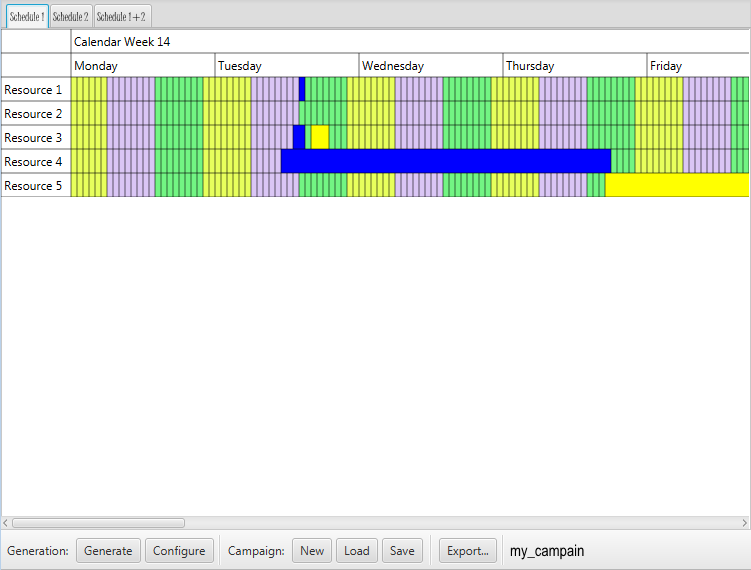 The picture above shows a program I am currently working on (for this illustration I modified the picture a bit). It will be able to generate a schedule on a specific planning problem.

There are three sections: The tabs, the Schedule of the selected tab and a Toolbar.

These two schedules together are called a campaign and it is possible to save/load such a campaign to/from the hard disk.

The Toolbar consists of 4 sections: Generation, Campaign, Export (as an image) and the name of the loaded campaign.

Now to the essence: I don't think it is the best idea to put all these controls in one Toolbar like this. The main reason is (like the title indicates) context (and with that I mean the selected schedule). Campaign refers to both schedules, thus not to the current context like Generation does.

I really would like to omit a menu bar which would be an idea where to put Campaign.

Is it really a good idea to mix context-sensitive controls with context-free controls in a toolbar? What would be an appropriate approach to solve this UI design problem?

Depending on how many tabs you have, their physical width, and the number of controls you need to present, you could put them along the top of the pane, as with the Create New Version button below:

It seems likely you would want to organize things differently, perhaps grouping the controls in a different manner. You might split out the identifier ("My campaign") from the controls, perhaps using it in a higher-level spot above the tabbed panel, and include campaign-level controls there, and put more schedule-specific controls on the panel. Here is a very quick example, if I am interpreting your description correctly:

This would also allow you to better control the vertical height of your content, and keep the controls "above the fold" (still an important concept, depending on your users).

Not the answer you're looking for? Browse other questions tagged tabs toolbar contextual-menu or ask your own question.

3
Alternate to nested tab controls for a windows desktop application
6
What is the best way to display per-tab commands or actions?
3
Context menu with non-clickable subheaders?
5
Alternatives to Menu + Toolbar or Ribbon
2
A tabbed Android UX element similar to iOS App card?
0
Where to put the context sensitive menu
0
Context menus in table
1
In a tabbed interface, where should I put the record count
6
Filter/Sorting best practice in Material Design?
5
Android TabStrip navigation alternative on iOS