I'm working on a web application that will be used internally in an organization. The application will ask users for multiple pieces of contact information. We will allow them to optionally enter a mobile phone number. We also will ask for a phone number to which they would like to receive text messages.

It is likely that the number they would wish to receive text messages on is their mobile phone number. However, in the event that it is not, we would like to ask them to enter a text message number as well.

Is there a better way to do this, or another way you have seen it done? Is it easier to just have the user type in the number a second time? Ideally we would like to reduce the amount of manual entry, while also reducing the likeliness of error (user typing in the number incorrectly).

Just keep it simple. There are two things you should be clearly asking of the user.

(What is not clear is whether you might want to actually call the user or are you just going to text them?)

It's bad enough that you are asking the user for a phone number (ok so it's optional) - very few forms do, and of those that do, most give a reason (Why do we need this), because it's one piece of information that users are very reluctant to give. I would make it clear why you want the number and I would ensure that you ask only for one number and not potentially seem to ask for two, when in reality, you'll be happy with one.

So your form should have a field for the mobile phone number, making clear it's optional so there's no pressure to do this. Then have a check box that says 'Receive texts on this number', but disable it until a number is entered. 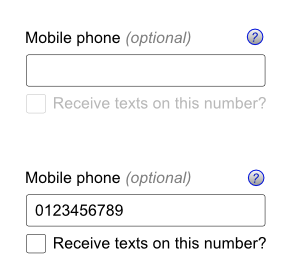 Make the 'Send Text Messages..' checkbox appear only if a valid Mobile Number is entered in the 'Mobile Number' field.

Case I So the user enters the Mobile number and then moves to the checkbox. If he 'selects' it, then we populate 'Text Number' field accordingly and make it 'read only'.

This should stop errors and confusion from setting in.

Does it happen often that people want to use a separate phone number for text messages? If not, focus on the default case with just one number:

And wait with the second field till needed:

(Similar pattern as you often see in webshops, in the part where you can optionally choose a separate billing address.)

I'm still not convinced there's a case for two separate numbers. Yes, a user might prefer two, but that's very rare, and I just can't justify burdening other users with an overcomplicated form. Remember, you can always provide an opportunity to provide more details later.

If you must do this, provide a form (possibly offered later) that lets people enter additional phone numbers of any sort (including multiple landlines), and give them the ability to assign priorities and flag one in particular as 'textable'. At least this time the extra complexity can at least cater for the use case of 'businesspeople with many phones'.

Make the phone number field agnostic, adding additional blank inputs as the user fills them with phone numbers. Then place a "text messages?" tick box next to each one.

if checkbox is clicked, show the other field:

Not the answer you're looking for? Browse other questions tagged forms input or ask your own question.

12
How to tell a client in a form that they can enter their email OR their tel # (but both are not necessary)?
4
Combining email and phone inputs into a single text field
24
Multiple vs single field capture for phone number form input
0
How can I tell whether to use input masking or magic inputs which accept any format?
1
Making it easier for users to fill out form on mobile apps
6
Best UI/UX for Multilanguage data inputs in forms
3
Best way to ask user to input real phone number?
6
<input type=“number”> or <input type=“text”> for entering an ID?
2
How can I allow the user to select an amount of product by either volume or quantity?