As per the Material Design Guidelines,

Flat buttons are text-only buttons. They may be used in dialogs, toolbars, or inline. They do not lift but fill with color on press.

Flat buttons are printed on Material. They do not lift but fill with color on press.

Use flat buttons in the following locations:

On toolbars In dialogs, to unify the button action with the dialog content Inline, with padding, so the user can easily find them.

The idea is to not confuse the user with too many card-like structures and an inception of raised cards. 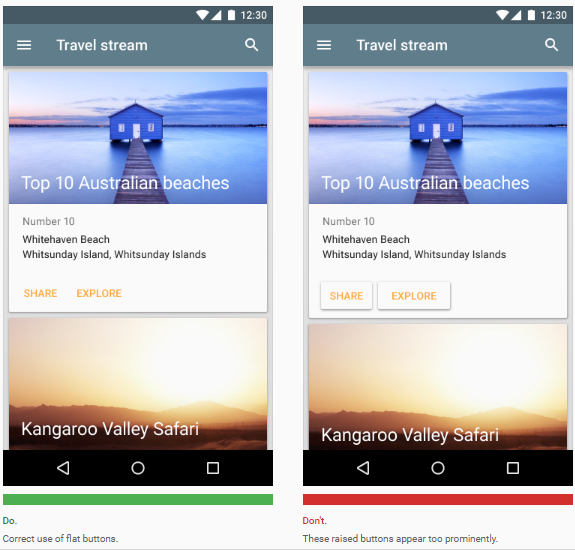 Although in the above image, I believe the color for the Flat buttons is probably one thing that doesn't make them distinguishable.

There are two principles that are hugely important to remember here:

People adapt very quickly even to the most obscure conventions.

We were all used to be used to underlined blue links, but why underlined and why blue? Why not red with a subscript icon? It is completely arbitrary. Yet everyone got used to it only to later get used to blue links without underline and even links that are not blue.

The world of microwaves is full of usability issues, yet people get used to these and few fail to recall how to operate each model after struggling once, twice, or trice.

Human inference is more complex than the heuristics used to analyse usability.

If you have observed users following a cognitive or an expert analysis, you probably acknowledge the (sometimes huge) gulf between expert analysis and actual human behaviour.

Users will sometimes have no issues where expert analysis suggest severe ones1.

The brain is the most advance inference machine out there. We know that it makes some gross errors in some areas (statistics, for instance) and is full of biases, but all these actually enable quick and accurate inferences where it really matters (essentially, anything related to survival).

When it comes to questions like this, people will recognise things for what they are based on a complex decision network that accounts for (amongst other things):

I challenge you to enable grey-scale mode on your mobile or computer. You'll probably be amazed how after a few days rare are the instances where the lack-of-colour makes it to your consciousness (maps will be one exception, so will surprisingly rare but really terrible accessibility issues).

The predict-confirm vs the classical IPO model.

As years go by, and in light of various theories and experiments, cognitive models attribute more weight to the predict-confirm model and less to the classical IPO model.

The classical IPO (input-processing-output) model asserts that input stimuli is processed to generate output (recognition something is a button, in our case).

A good example for this is that you know what's coming:

Once proficient, we read in exactly the same way (neither whole words nor whole sentences) - our brain predicts what's coming and then left with the easier task of confirming the prediction rather than spending cognitive fuel on understating everything as if no context exists.

The point being made here is that it is easy to spot potential usability issues based on heuristics, but these may be no issues at all when actual human behaviour is observed. Partly, this is due to picking on a specific micro detail (which may well involve issues) rather than considering the macro picture (the whole context and human's superb inference ability in cases such as discussed here).

Perhaps the best entry point reference on this topic is: Clark, A., 2013. Whatever next? Predictive brains, situated agents, and the future of cognitive science. Behavioral and Brain Sciences, 36(03), pp.181-204.

So the answer to your question would be: With some exceptions - yes, people will recognise it. This is due to two main factors:

Not the answer you're looking for? Browse other questions tagged buttons design material-design google-materials-design or ask your own question.

20
Are Flat Buttons Unusable?
23
Material design - buttons raise, not depress
8
Is there a reason for drawing Material Design flat buttons like plain text?
2
Push icon - material design
18
Fixed width for buttons or proportional with the text?
6
Renew subscription CTA button
1
In material design, why dialog actions should be in all-caps?
0
Material Design for web: Buttons with labels or icon buttons?