There is a promo page that sells some app or game. It has a grid of thumbnails, click on which shows videos about an app. Something like this:

After user clicks on thumbnail, modal (lightbox) appears with YouTube video in it and starts playing immediately: 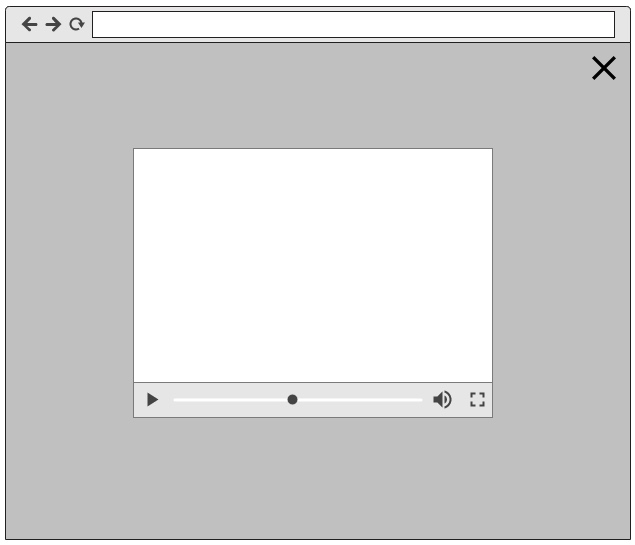 If user clicks on "Close" icon, or grey area behind modal - it closes.

Now, here is what user does:

So the question is: should the video start from the beginning or from the moment the user closed the modal on the first time? Will your answer change if the user refreshes the page between step #2 and #3?

If you're going to make the choice for the user, I'd suggest using "Resume" since it's much easier for the user to revert back to the start than it is for them to find their place in the video.

An alternative is to give the user the choice. For example for an unwatched video the option is "Play" and for a partly watched video you use both "Resume" and "Play from start" as the possible actions from the thumbnail.

This gives you the opportunity to use your analytics to measure how frequently each option is used. You can always drop one action in future based on the data.

Instinctively (I can't really provide any research to back this up) I'd say that when you close a modal the implication is that it's stopped existing, and when you open it again that's a new modal, rather than the same one that had been hidden all along - so based on that I think generally it'd feel more intuitive to start from the beginning again.

That said, I can think of use cases where this behaviour wouldn't be desirable - for example, if the YouTube videos were 40-minute training videos then having a record of the user's progress could be preferable.

I think we cannot give you a valid answer because we don't know why the user has opened the video for second time? What brought him back to view it again? If you can understand that you will definitely know what to do.

It depends also on the contents and length of the video. Is the video showing some guide on how to play or is it just showcase of game features?

It also could be a bug and that is why they are refreshing. The best way is to try to find answers to the question is by researching why they reopen the video.

I prefer the option when the video starts from beginning and have an alert box before (not modal, just a section) with a button for "Resume".

Not the answer you're looking for? Browse other questions tagged modal-windows video lightbox or ask your own question.

6
Quantitative studies on autoplaying video?
1
Deleting, editing and sharing individual videos within a list
2
Overriding click to pause with click to select, when selecting a video
3
Is video onboarding a good idea?
0
User behaviour when user closes prompt and returns to video which is paused in the background?
2
Matching events on timelines of different scales for a video scrub bar
2
Back to Posts Page from a Post that belongs to page 2. Load page 1 or 2?
1
Users' attention to minimized video
1
Modal dialogs on mobile - Back button
7
Does a video lightbox need a close button?