I'm working on this UI element to replace the dropdown and multiple select UI rendered by browsers for the select HTML tag. I would like to show a list of options where users can click on each option to select/unselect it. Depending on the presence of multiple attribute, users should be able to select one or more items from this list of options. What is the name of such an UI element? 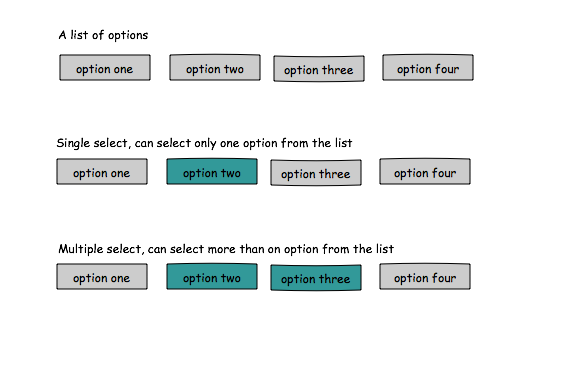 These are the goals I'm trying to achieve:

You should focus first on the functional requirements, not the visual appearance as that's easily changed with CSS. There's two specific input elements that provide exactly the functionality you describe, radio and checkbox. Radios are for selecting one option from many in a list, while checkboxes are for selecting one or several options in a list.

From the W3C spec:

Radio: ‘The input element with a type attribute whose value is "radio" represents a selection of one item from a list of items (a radio button).’ https://www.w3.org/TR/html-markup/input.radio.html

Checkbox: ’The input element with a type attribute whose value is "checkbox" represents a state or option that can be toggled.’ https://www.w3.org/TR/html-markup/input.checkbox.html

Styling up <input type=checkbox> or <input type=radio> to look like your example is trivial, requiring only a few lines of css.

If you only want to describe the visual aspect of your illustration ‘group of buttons’ might be a good option, but I think that is misleading as these elements won't function like buttons. Overall I'd say ‘Checkboxes styled like buttons’ is probably the most accurate description to use here.

Button Group would be the most commonly used term, in my experience, for what you are describing and illustrating.

I like this approach. When you have less than 5 options for users to select from, radio buttons or checkboxes are a good idea. I think you can design this interface similar to the wireframe and the front end developer will know what to use.

The buttons inside a group are called "toggle buttons". I don't think the list has a standard name, though. Perhaps call it "toggle button group"?

13
Making it clear which items in a long list are selected
25
What are good UI patterns for selecting exactly two items from a list?
3
Adding an item to a pop up list
9
What is the best multi-select filter for an article list?
2
How to navigate through multi-select menu
5
Using accordion lists with radio buttons
0
Display a list where only some options have sub options
1
How to organise a multi-select list that allows for selection of both users and groups, where users can have multiple groups?
2
Is it a good user experience to prevent user from deselecting an item from a dropdown if it is required in a form?
0
How to keep all options selected by default, while making it easy to select a few options?