How can I show that a menu item in iOS has its own Settings?

Initially, instead of the cog icon, it said "Settings", but because of internationalization issues and this word being possibly long in other languages, we decided to just use a cog icon.

Do you think this is the most efficient way of laying out a menu item that can have two actions associated with it? Maybe the cog icon should be next to the text itself instead of the arrow?

Are there other interactions that you would suggest? 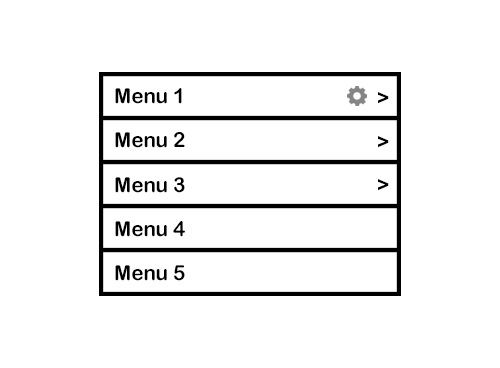 Oh! I thought menu 4 & 5 weren't tappable because of the missing arrows. So based on this new information and your comment on Big_chair's post I have the following idea:

User will be sent to "Menu 1" screen when tapped on Menu 1. On the Navigation Bar of Menu 1 a cog will appear, making the user able to edit the settings (either on the same screen or another screen). This cog will not appear on the others menus screens.

How often dos the user need to access these settings?
Because if it's only occasionally, then I don't think it's necessary to display that option permanently.

Display something like "Edit" in the top right corner. When the user taps that control you display the settings icon on all the rows.
Then it will probably also be clear what the icon does.

Also, check the Apple HMI guidelines for further references to the TableView.

OK, here's my take: You have at least 3 elements to consider:

While I have no info about what do this settings affect, based on the information provided you have to consider this:

So, the obvious solution: place the cog next to the element it belongs. Not outside the menu, not at the opposite side of the menu item, just next to the menu item. This way, it's easy for users to see this element is different and it has some associated behavior (which, based on the icon, cognitively indicates that associated behavior is settings) , while it will be obvious all other items' arrows indicate they're going somewhere else (hence, leaving the current view)

see a quick mock and explanation below: 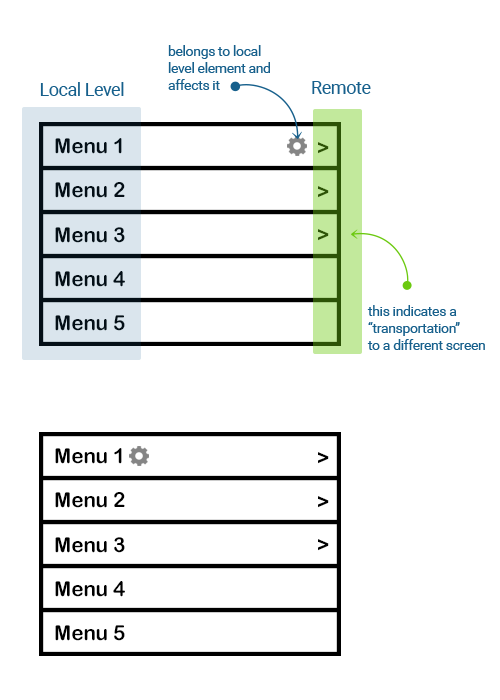 Not the answer you're looking for? Browse other questions tagged usability interaction-design ux-field usability-study human-interface-guideline or ask your own question.

11
What's wrong with this picture?
3
On a tablet, is it okay for both modal-style windows and full-screen programs to close with different methods?
1
What is the best way to show an item has been added to a list in iOS?
1
How can I communicate that a list item is expandable?
1
In Android quick settings menu why is Cellular data on/off option in a second screen?
1
Desktop Website - Navbar - How to communicate that a menu item has both Onclick and Onhover functions?
1
Is it a good idea to add a shortcut to a gallery from the modal I am in, instead of closing it to go back to the gallery?
21
Alternative to hamburger menu? UI example inside
3
Naming “Long running tasks” for a web application