What is the best way to design layout a screen on a tablet that's supposed to only show two button?

I know that the simple answer will be just add two buttons on the screen and I'm good to go. But I just feel that it's awkward to just put two button on the center of a big screen, especially because the screens that follows the buttons cover the screen fully with controls and informations.

The two buttons are shown at first page after login. The buttons are for the user to select one of the two section to use, which each has a very distinct user interface and purpose, it feels like two apps in one. The second button is supposed to be used / tapped more frequently (daily) than the first one (can be monthly), but the first button opens a more important task than the second one.

This app on the tablet will be used by higher executive staffs, while the smartphone counterparts will be used by common staffs. Considering that this screen will be seen every time the user open the apps, do you have any suggestion on how to design this first screen so that it might deliver good first impression, but still does not distract the user? I know that I probably overthinking this, so any suggestion is appreciated. I never thought that design such very simple screen with very few controls can be very dilemmatic.

I would get straight to the point and just show the two options.

Since you have some space to spare, I would also add a quick description of each option. This helps new users find what they are looking for and returning users quickly recall the difference between the two options. 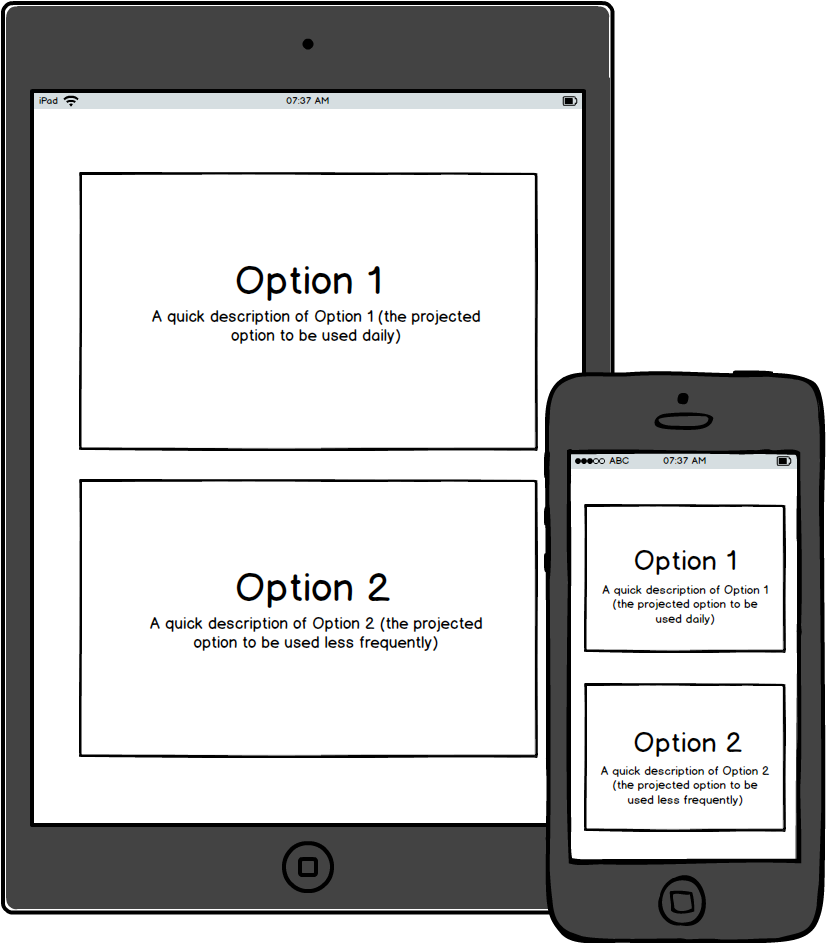 Not the answer you're looking for? Browse other questions tagged buttons layout or ask your own question.

2
What design should I use to represent multi-touch video controls?
0
What is the best layout / most important data, for an online auction?
64
What is the optimum button size of touch screen applications?
18
What is the best way to show my users that buttons in the same line have different functionality?
1
One single button or two buttons
1
What is the term for the design pattern/micro-interaction where you speed up an action by holding a button?
1
What would be the best way to show 3 actions on the bottom half of the page
0
iOS: Delete/Upload button position
1
Best Third Button Placement in Website