How should I handle toggling of chart series based on groups of checkboxes?

I'm modifying an interface for an interactive line chart that can contain anywhere from one to twelve series of data. Users will be able to choose which series they can view by clicking on a set of checkboxes.

The checkboxes are sorted by type of series; three checkboxes per series, as well as a "show all" checkbox that will plot all of the lines in that series. There is an additional set of three optional checkboxes at the bottom that allow the users to cut "across" the data to see date-specific, rather than series-specific, comparisons.

Here's my question: how should I handle toggling of the "show all" checkboxes?

Currently, if a user chooses either a "show all" checkbox or a date-specific checkbox, all of the chart's existing lines are cleared and new lines are drawn based on the boxes chosen. My thought here is that this behavior would prevent cluttering or "muddying" of the data.

What I'm concerned about is whether that's a bad experience for the user. Say I chose a checkbox from each of two different series, and then chose a "show all" checkbox from a third series. Would it be confusing to see my first two choices removed?

I'm including an edited screenshot of the interface, which is still currently in the review stage. I would greatly appreciate some sound guidance. Thank you! 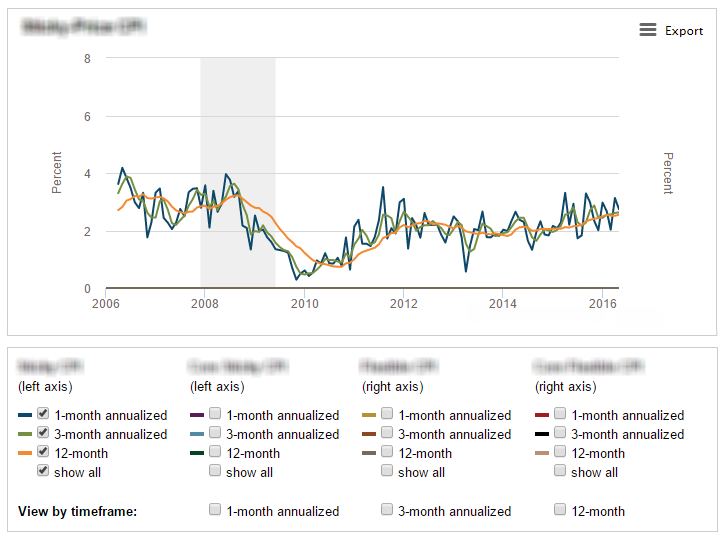 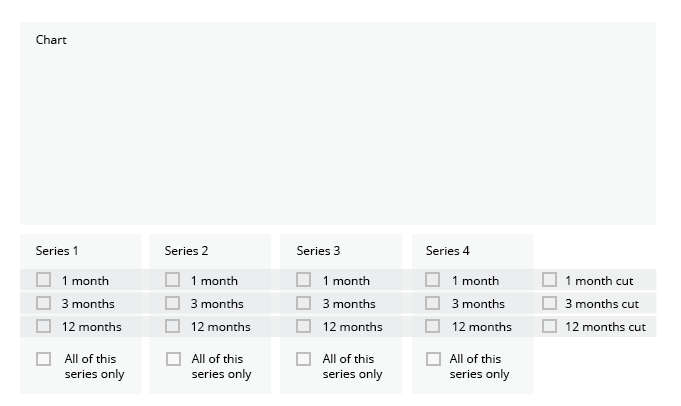 "Say I chose a checkbox from each of two different series, and then chose a "show all" checkbox from a third series. Would it be confusing to see my first two choices removed?"

It would be very confusing if the first two choices were removed but still shown as 'checked' in their respective checkboxes as there would be a mismatch in state between the checkboxes and display.

I say that because the checkboxes say "select all" for their respective series, not "select all here and clear everything else" or "select all (exclusive)"

So I'd either clarify what happens via the label or, and this would be my approach, keep the previously selected series as being visible.

Yes, it would be confusing and potentially annoying or even frustrating.

You might want to rethink how the interact. Maybe you have the choose from all, date, or custom first. If they choose custom, they get the option groups.

Generally speaking good form design is: if something is toggled, radio button. If choices and multiple selections, checkboxes, dropdown.

Not the answer you're looking for? Browse other questions tagged user-expectation info-visualisation controls checkboxes or ask your own question.

6
What's the best way to graph results of a matrix ranking question?
7
Representing "undetermined" in a three-state checkbox
19
What do you do when you have too many choices in a checkbox field set?
14
Should a special slider value be implemented with a checkbox or not?
8
Checkboxes or Radio buttons: Only one or zero choices
0
How to handle complicated monthly repeat options
7
Category filter using checkbox, tag or most popular?
1
Single and Multi-Select Up & Down Arrow Locations
1
How to convey True, False, No Change to a user editing multiple items at once?
3
How to select a parent checkbox either separately or with children?