What do the three bars in old installers mean?

Quite many old setups look kind of like this: 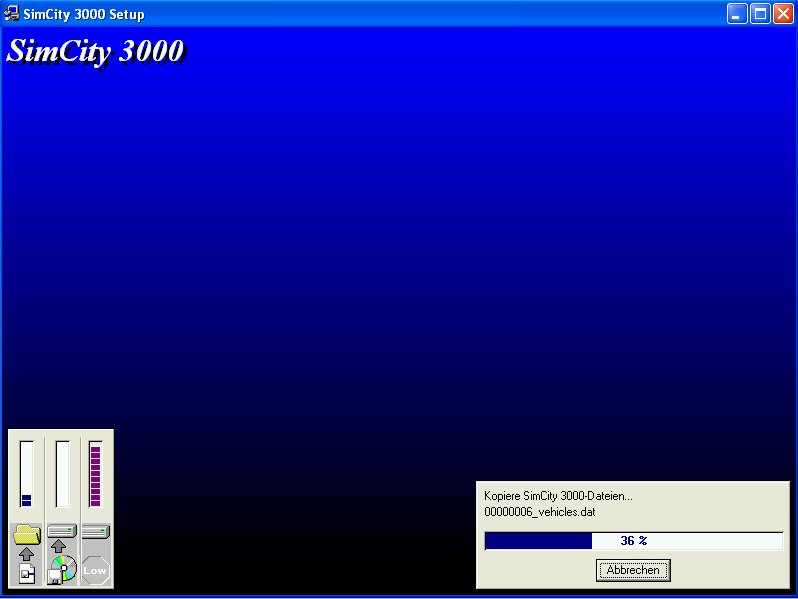 I always wondered what the three bars in the bottom left-hand corner mean. I really have no clue.

I have installed a few games with this in it and I personally couldn't find any evidence to support my explanation online after quite a brief search but here's what my thinking is:

The first one was dependent on the file being downloaded/transferred. It used to be dynamic and the greater the bars, the faster would the progress bar with the percentage load.

The second one used to be active only when the game was installed from a CD. From this video, you can see the content and setup is locally stored, and hence there is no CD Read/Write that is no bars. Needs citation.

The third one, I'm not really sure about since I haven't seen it really drop low during the times I installed the games, but I figure it's related to the Disk or CPU memory that's RAM or ROM since you can see LOW mentioned on it. Probably to indicate the amount of memory free during installation.

I will research a little more on this and update the answer.

The thing to keep in mind is, Bars were a design trend back then and were used mostly everywhere, including indicators to Battery on Nokia devices. More Bars always meant something positive.

It's been a long time since I've installed a program with this type of interface! From memory:

The main indicator you would pay attention to was the middle vertical bar. Each "dot" in the column represented roughly 10% (unless it was a different height), thus giving only a very rough idea of the total progress, much less than the percentage of the current file shown on the right.

The purpose of the "file" indicator and the "directory" indicator was to let you know why the next level up was progressing so slowly and so you wouldn't think that the installer had crashed!

Not the answer you're looking for? Browse other questions tagged icons interface progress-bar installation or ask your own question.

31
Progress Bars - Why are they never "useful"?
7
When shortening time expressions in progress dialogs, should they be rounded up or down?
38
Is Apple's or Google's meaning of the three-horizontal-bar icon more popular?
31
Why is the settings icon either associated with gears or a wrench + screwdriver
13
How do you visually represent "progress" on a negative (lower is better) goal?
61
Why is the file icon usually folded from the right corner?
5
Should progress bars accurately reflect how close the operation is to completion during long operations?
2
Why is it that version managers are always mentioned after the installation instructions?
1
How can I show the relationship between two progress/health bars?