I'm facing an impasse with a colleague of mine regarding the usage of native iOS / Android icons on one of the apps we are currently building. This very app offers the users the possibility of finding fuel prices around their areas.

When users find a fuel station on the map (Apple Maps for the iOS version, Google Maps for Android version), they are offered with the following UI: 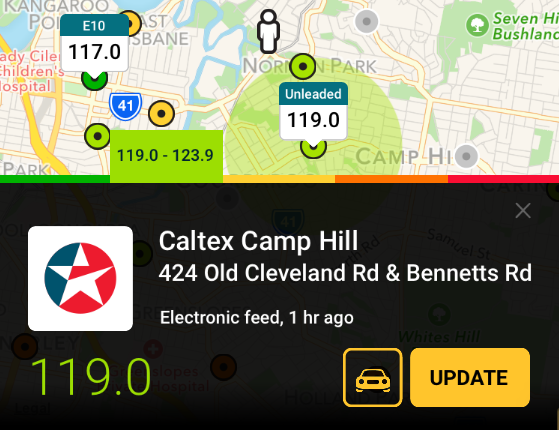 The button with the car icon is taking the user to Apple / Google maps and opening up the route to that fuel station.

The problem itself is that i've heard feedback from people that were not involved in the development (and thus don't know how to use the app - yet) saying that the car icon doesn't make it clear that by clicking on it one will be redirected to Apple / Google maps.

So i've searched for a new icon on google and requested feedback to the same people - which agreed that it was already better than the car icon (please don't mind the low res, i'm not a designer and this is just a quick mockup):

But the problem is: the project architect still believes the car is better because users are "used to it", since it's the icon present on Apple Maps / Google Maps. No matter how many people agreed that the second option was better, he just kept claiming that we must always follow the same iconography provided by the manufacturer of the current device / OS and avoid making users "learn" new icons.

So, my questions are:

Your second icon is definitely better. It clearly communicates the idea of getting directions/navigation, which is what you want.

I'm not familiar with Apple Maps, but a car is neither the symbol for Google Maps nor the symbol representing directions/navigation within Google Maps. The only thing it is used for is selecting the transportation mode in that context (which is not what you are trying to communicate).

In addition, the car is confusing because fuel stations are car-related. It is ambiguous because it could relate to the context that is being shown in multiple ways.

I would agree that the car isn't a clear icon for the action of going to maps and checking a route to get there.

It's kind of a best practice nowadays to use a pin-type icon (known from apps such as google maps) for showing either a location, or a way to get from "A to B".

Not the answer you're looking for? Browse other questions tagged user-behavior icons mobile-application or ask your own question.

4
How to encourage non-techie users to print the high resolution version in a photo gallery?
38
Is Apple's or Google's meaning of the three-horizontal-bar icon more popular?
12
Do iOS / WP users recognize the Android share icon?
2
How to let users know that native app versions of a product exist for desktop users without breaking the design?
46
Should we use the 3x3 9-dots icon as an apps menu?
0
What is the "view_module" icon for?
7
Can I use the same share icon for different functions?
0
Live app icons on smartphones?