Previously when facebook only had a 'like' button and comments for people to respond to a post, user engagement can be evaluated in terms of the number of likes as well as the number of comments. Since making a comment takes more effort than clicking the 'like' button, it could be argued that posts with a high ratio of likes to comments indicates a high level of user engagement (i.e. not someone who just clicks 'like' and move on).

Now that facebook has expanded the user response to a set of 'reactions', I am wondering how this has changed the way people analyze user engagement. In one way the initial effort has increased dramatically from deciding whether to simply clicking on a button or not to having to choose the appropriate reaction to a post.

Does this mean that getting a reaction is 'valued' higher than getting a like? Does this also mean that because reactions incorporates a little bit more information than a 'like' that perhaps comments lose a little bit of their value in the process?

I am wondering how facebook reactions are being used as metrics for user engagement, and whether it can be weighed or compared against the original 'likes' or if it is too difficult to draw meaningful comparisons.

Excellent question ! Apparently a study by globalwebindex shows that after the launch of reactions, the number of users who interact or react with a post has increased after Facebook introducted Reactions. To quote the article

The replacement of the one-size-fits-all button appears to have been a hit among Facebook’s users. GlobalWebIndex’s data shows a clear upswing in the number of Facebookers “liking” things on the platform since the new button was launched. It’s now a sizable 8 in 10 who are clicking “like” or "reacting" to posts each month – a 16-point jump on the previous quarter. 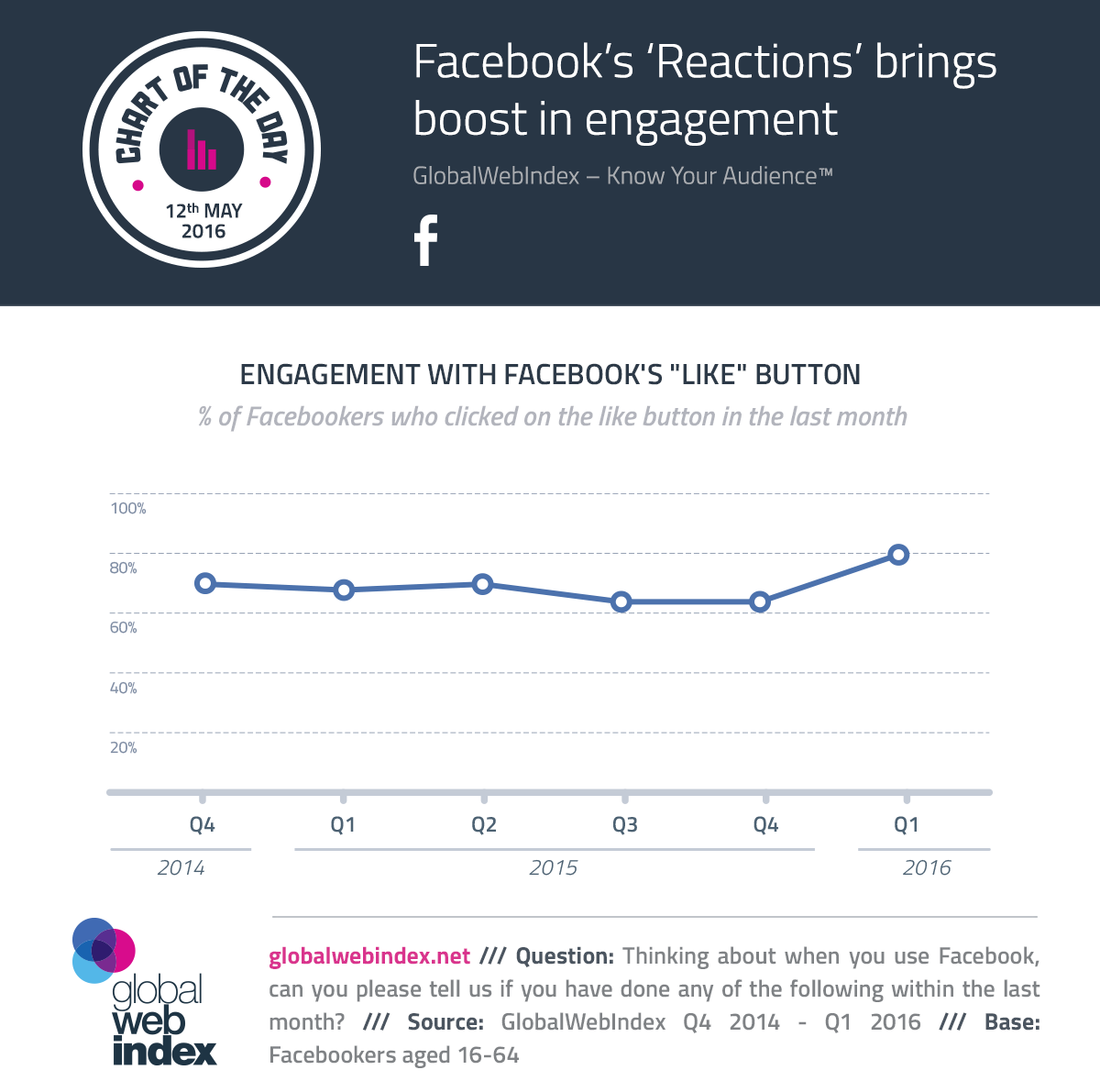 With regards to your question on whether users spend more time deciding on which reaction to use, I still am yet to find data on that but one impact might be on how people interact with positive and negative news.

A study from facebook found that when people posted positive news they got a lot of likes but when they posted negative news, the number of comments were significantly higher. To quote the article

We categorized the top 200 feelings as positive or negative, and whether they related to the poster's self-worth (e.g., feeling accomplished, feeling proud, feeling defeated, feeling stupid all relate to self-worth, while feeling lucky, feeling rested, feeling tired, and feeling furious don't). Ambiguous or neutral feelings (like feeling weird, feeling crazy, feeling hungry) were omitted from analysis (about 11% of feelings). See the paper for the full list of feelings. Roughly 1/3 of feelings shared on Facebook are negative, indicating that people share more than just good news on the site.

Then we counted how many likes and comments these posts received. Not surprisingly, posts with positive feelings (like feeling excited) get about 58% more likes, and positive self-worth feelings (like feeling strong) get about 71% more likes. Our analyses control for other factors likely to affect the use of feelings and feedback rates, such as posters' age, gender, friend count, and years using Facebook. 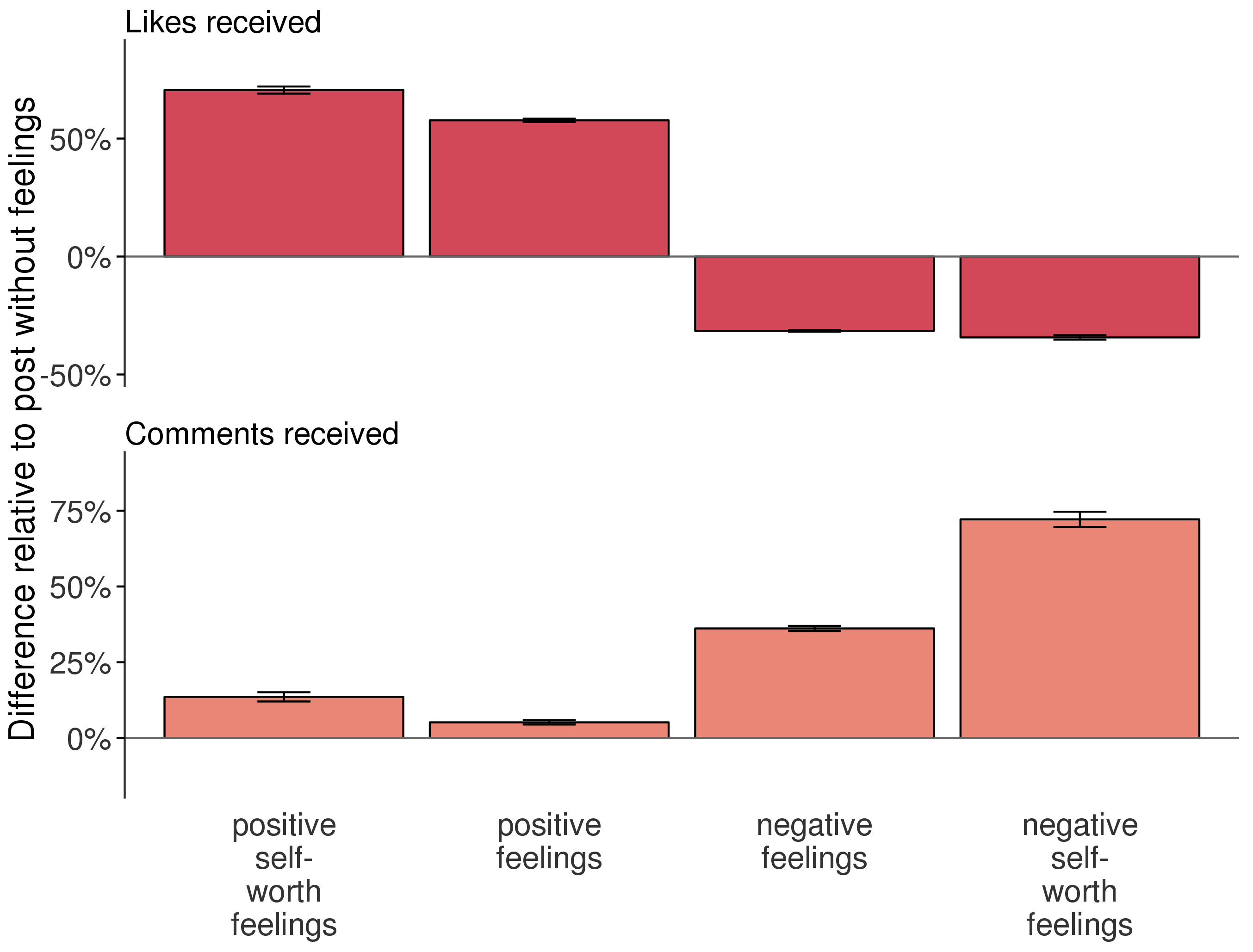 Hence with the new reactions,since users earlier did not have an option to communicate displeasure and had to use comments, it would be interesting to see how the impact on comments is there when negative news is posted.

Also this article which checked people's reactions to posts on popular facebook pages shows that LIKES still leads the pack. To summarize the article

Not the answer you're looking for? Browse other questions tagged facebook user-engagement social-proof or ask your own question.

2
Facebook user and friends user display patterns for Windows 8 Metro App
6
Character stats page design for Facebook game
14
Metrics for measuring user engagement for web applications
3
Does requiring the user to click or otherwise interact with a page increase engagement?
4
App - Should a user be able to edit the text of a tweet or facebook post?
3
When logging out of a website that authenticates with Facebook, should the user be logged out of Facebook as well?
3
Is there a user engagement benefit to breaking a long page into two pages?
7
Usage of mascot to increase user engagement and happiness
1
How do I mitigate the risks of user-generated data when not requiring authentication?
1
Fullname vs username and how to ask for username after Social Login