Should we hide table column when empty

We are building a software where the user has the possibility to translate buttons, messages, labels etc. The translation page consists of a table with - element key, english language and format of the text. The user can then choose from a drop down another language which will load two more columns in the table (language 2 and format for the text). 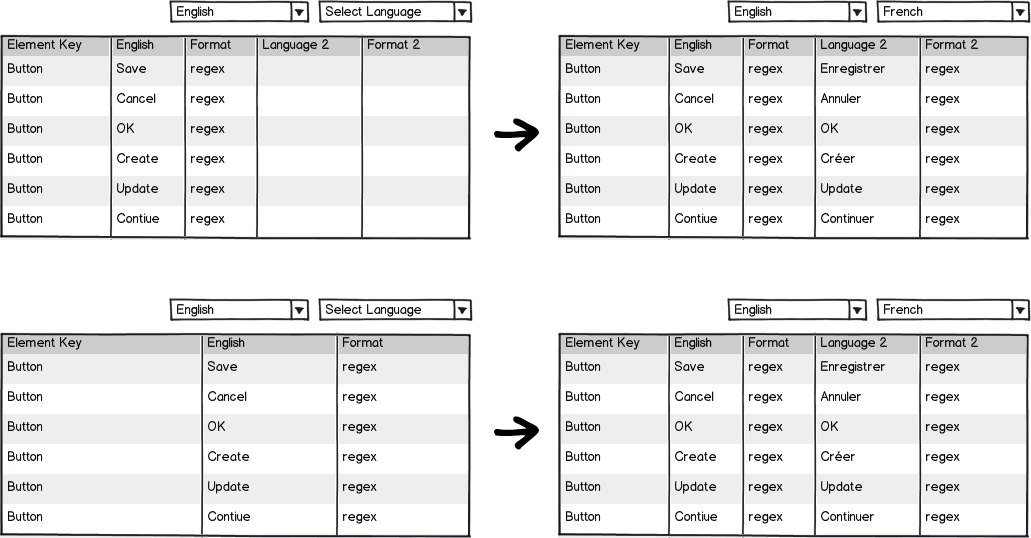 But if the user has chosen once to show a particular language the system should learn that the user needs this language and show him the language in the future unless explicitly deselected/removed.

In an utopian version of the software the user should be give the power, instead of choosing it for him, he should have power to display what languages he wants to be visible and which ones are optional for him.

The control to show language should be simpler than what have been suggested in the wireframes.

Neither - use intelligent defaults to ensure that the last two columns always contain meaningful content.

EDIT: To expand on this (admittedly short - sorry, got called into a meeting) answer... On first load you should populate the last two columns with one of the following two options:

For subsequent visits you will need to have stored their last used/most frequently used language to translate to, so that you can populate the last two columns with that language.

Not the answer you're looking for? Browse other questions tagged tables user-expectation or ask your own question.

8
When is a table the proper way to present data?
2
In a sortable table, should sorting by a column of identical values result in any change in ordering?
3
is it good practice to keep my table rows inline-editable
9
Should searching a table include hidden columns?
4
Columns in a table - settings buttons position
20
How should “Select All” work in a “LOAD MORE” table?
4
Dealing with selection when collapsing a tree node
0
Help Button - should it be always visible and should it redirect to a specific section in the documentation?
1
Placement of table header