What do you put in a country list for countries with more than one common name?

I'm from England, which means in drop-down lists I have to search for United Kingdom, then England, then Great Britain... it's generally the UK, but it does vary from site to site. What is the best practice for cases like this where there are multiple ways to refer to a country?

Edit: I should clarify what the problem is, here. When presented with a big list, I have to go hunting. The problem isn't that I'm confused about which to pick out of say, England and UK, the problem is being presented with a long list I have to search and have no idea which one to look for. It's very frustrating when a list doesn't have whichever one I look for first... or second... so I have to look in three different places to find my country.

I'm sure there are other examples out there of similar situations, this isn't specific to the UK I'm sure.

For the hunting down the list you can check out the answers from Adding USA at the top of dropdown list of countries. OK practice or not?. For example:

Also, if you have more space on the page, have a look at the answers from Choose Your Country: Best Usability approach. Depending on your usage you can display a big list with flag icons, grouped by continent, or use a map. 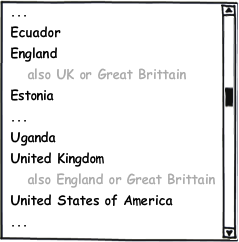 (where the note is inside the option, so when selecting, you select both the name and the note.)

Isn't this also a question about granularity? Choose the highest common factor that adds or differentiates value in your service.

For example - does a service actually differentiate between users from Scotland and users from England. If yes, include both. If no, stick to the United Kingdom as in Katie's linked list.

If there is no differentiation between users in the UK and any other countries in the EU, then consider sticking to Europe - and similarly for other continental or cross-nation regional divisions.

[edit] If it's not part of a service but part of an actual postal address, then use United Kingdom - as it's the internationally recognized country name (unlike Scotland,Wales,England,Northern Ireland).

Choose a standard and stick by it.

Here is a link to the International Standards Organisation country names and codes. http://www.iso.org/iso/country_codes/iso_3166_code_lists/country_names_and_code_elements.htm

For simplicity, I always recommend 'United Kingdom'. But a well-constructed list will quickly let me figure out that United Kingdom is the option to select. And truth be told, I can't recall any site I've seen recently that had any other options. As others have mentioned, 'Great Britain' is not a country.

The only downside of putting 'United Kingdom' is that it's then not entirely accurate for the Isle of Man, and the Channel Islands, as they aren't really part of the United Kingdom.

To go off on a slight tangent, for what it worth, I have less of a problem with countries, but rather difficulties when locating the Pound Sterling on a currency menu. I've seen it as: - GBP - British Pounds - Pound Sterling

I tend to scroll up and down the list, or start typing until I find one of the above options.

England is not a country. Neither is Great Britain. At least not today. So there can in fact not be any confusion about this: United Kingdom is the only correct entry to add to your list.

Adding multiple names to the list will actually make things more complicated for the user, don't do it. I can already see users wondering if they need to pick "England" or "United Kingdom".

Since you are from the UK, how do people in the different parts of UK like to identify themselves.

Also research the most popular e-commerce sites that cater to your region. What what they use? This will help with the "convention" aspect.

If your it infrastructural allows you to determine country based on IP or network, i would suggest that you pre-fill that option. A drop down with 200+ options can be frustrating to navigate.

What's wrong with including all the common names? For instance, if you wanted to support the UK and the Netherlands:

If you're worried that users will get confused why there is more than one option, than you could do this:

I did a bit of informal user testing on this a while ago, to see if there were issues. United Kingdom at the top, then repeated alphabetically. From memory:

Like I say, this is from memory, which is fallible, and I don't have my notes. I do remember item 6 quite clearly though, and I do know that we were satisfied with the design as tested.

It takes half a day to do a bit of testing on this, if you use an existing site and a realistic task.

Not the answer you're looking for? Browse other questions tagged drop-down-list internationalisation or ask your own question.

62
Adding USA at the top of dropdown list of countries. OK practice or not?
25
Choose Your Country: Best Usability approach
3
How to deal with official country names which aren't understood by users?

5
Models of user interaction when dealing with selections from a looong list?
6
Order of 'Country' and 'State' fields in Registration forms
3
How to combine Suggestions with Filtering in a searchbox?
3
Are there any other approaches to language selection other than these?
4
Address list following a postcode search, should a drop down list or radio buttons be used?
8
Is a language switcher necessary on a web site's every page?
3
Allowing non-Latin characters in address fields?
1
How to generalize asking for highest level of education in international survey?
4
Why is sites i18n often based on the users country and not the preferred language in the browser?
3
How to deal with official country names which aren't understood by users?