Another interesting factor is the very slow and gradual uptake of alternate keyboard layouts like Dvorak and Colemak that introduces more efficiency and less strain on the hands, which has prompted the increase of virtual keyboards that map these alternate layout onto the physical keyboards.

With the trend towards same user interface across devices (cloud or browser based applications leading this trend), I was wondering if there is a standard being established for keyboard layout that is intended for all devices, or whether there will continue to be a divergence of layouts as long as the current separation of mainstream devices continue (i.e. desktop, tablet, mobile).

My question: is there a standard keyboard layout designed to work across different devices and work environments? Or is this too hard to do because of all the variations of devices and use cases that needs to be catered for?

Perhaps it won't even be necessary if conversational interfaces become more popular, or if the prices of virtual keyboards come down (e.g. those that use visual and tactile sensors to process input).

French language uses a lot of é and è. These characters are located respectively on the 2 key and the 7 key. 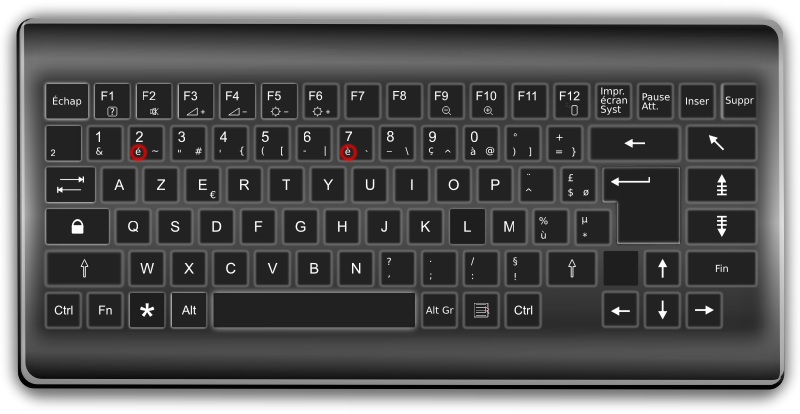 In fact, there's used so often that, without pressing the shift key, pressing on the 2 or 7 key will print not the number, but the é or è character. This is different from an english keyboard.

Maybe you've already spotted the other differences : location of the ^, of the ç, etc.

That's a lot of changes, and using a standard qwerty keyboard is really annoying if you want to write something in french. Germany, Spain, etc. are using other special characters. And I'm not even talking about Russia, Japan, etc.

So, no, I don't think an international standard physical layout is possible.

On a smartphone, the issue is a bit different. Due to the lack of space, you need to press for a short duration on a key to display special characters. If you want to write é, you need to press the e key for one second or so, and select your character for a small menu.

All the special characters are accessible in the same amount of time, so one could argue an international digital layout is possible (still not talking about Russia or Japan).

But the fact is that the layout of digital keyboard are inspired from the layout or physical ones. It would be weird indeed to have to switch layout when switching from physical to digital.

So... yeah, even a standard digital layout is not possible in my opinion.

(sorry for my english, it's not my primary language as you've maybe guessed)

The current international standard layouts are all based on the staggered QWERTY type layout - We all recognise it as a keyboard for typing text into - so much so that it's often used as the icon for adding text to something.

Dvorak and other standards have gained popularity in recent years but I think we are far from a point where they can be considered "normal".

To put this is some kind of context, there are more that 120,000 characters currently recognised in Unicode covering more than 120 different scripts - that doesn't include variations of the latin alphabet.

Realistically, these can't all be supported on a single keyboard layout.

I think the virtual keyboard that most of us are used to is probably the closest to the idea of a standard that we have at the moment: It can be adapted to suit any task (number pad, dial pad, email keyboard, basic text keyboard, etc) and can be assigned any characterset as needed (we have all switched between text and emoji!) covering everything unicode could possibly throw at it.

(Physical keyboard for all emoji)

There have been a lot of studies on keyboard layout in the past 20 years. James Lewis of IBM has performed a lot of them. I was interested because I was in the business of designing mobile phone keyboards.

The short answer is that there are two letter arrangements that get good results: alphabetical and QWERTY (or local equivalent). And QWERTY is almost always better.

There are a few reasons for this, practice and letter combinations.

The two arrangements are highly practiced, and getting more so. You know where the letters are, and the age at which you know is getting younger and younger.

Letter combinations in the original QWERTY design are pretty well optimized for speed - you use alternate hands to type common pairs. "TH", "IE", and other common pairs are typed with different hands. On a thumb keyboard, that puts the letters on opposite thumbs for faster access. And it doesn't particularly matter on a single-finger keyboard. (Gesture keyboards like Swipe also benefit from this fact)

Yes, it's true - if you can find an audience who is not already familiar with QWERTY and isn't using any other keyboards then you can get a speed advantage with Dvorak. But in tests, that speed advantages is less than 10%. Good luck finding the audience though.

Not the answer you're looking for? Browse other questions tagged keyboard standards keyboard-layout multiple-devices or ask your own question.