Removing a caller ID will seldom be done. You would do it if a number was mistakenly assigned to a location for which you do not have a caller ID yet, but this would be a rare occurrence.

Using option 1 to remove a caller ID forces an extra click over option 2 (a confirmation dialog for the removal would still be necessary). However, users will come to this page 99% of the times to set up a new caller ID or change an existing one. My concern with option 2 is that -to facilitate 1% of the use cases- users may be confused, even if momentarily, by the presence of the remove buttons in the data grid.

What option would you use? Can you think of a better approach?

In think the first option of the two is the best. The pencil is a logical symbol for editing. And it would only be a waste of space if you would put the cross for deleting there, if it is not used often.

However, I would prefer to not have the radio buttons there on your popup window.

In my opinion, that would seem logical.

I think you could solve the problem by not displaying any of those buttons, but instead: 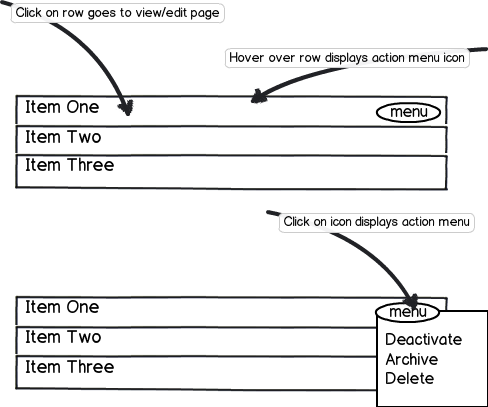 Not the answer you're looking for? Browse other questions tagged web-app icons data-tables usability-engineering or ask your own question.

3
Action buttons placement related to data tables
0
Intuitive way to present chained 1-N relationships
2
selecting multiple items from a short list, and marking one of them as "leader"
0
Best way to show tables with less data
6
On/Off controls on an inline editable table
1
Data tables/grids in task based UIs
2
View icon or full row clickable on a grid
1
Input data in data tables
3
Where should you allocate the edit and delete buttons in collapsible panels?