Should new users in a message thread see previous messages?

I'm working on a messaging app where it is similar to Facebook messaging between friends, like Facebook any number of friends can be involved in the chat. Unlike Facebook (I believe?) users can add in other friends at any time during the chat to join the conversation. What I would like to know is should these newly added users be able to see all previous messages in that conversation?

When it would be good:

Say User #1 and User #2 just spent hours discussing and figuring out plans for a trip, then User #3 decides they want to come too. User #1 invites User #3 and now they can just read through all the plans without have to go over it all again.

When it would be bad:

Two weeks before aforementioned conversation User #1 and User #2 were badmouthing User #3 behind their back. User #1 had forgotten about this before inviting User #3. Now User #3 scrolls up and reads all of the things said about them and "friendships" are ruined.

Note: these examples are just given for context I'm sure there are plenty of other pros/cons to consider, like if bank account details were previously shared it could be more nefarious than simple gossip.

EDIT: One other important distinction from Facebook is the chat instances only span the duration of that conversation history. Think of it like little chatroom hangout where User #1 starts a conversation with User #2 called "Trip discussion" and do the aforementioned scenario, the history would be limited to that thread.

Allow the users to choose

If you want to maintain the conversation as the same thread, you could provide the users with the option at the time of invitation. 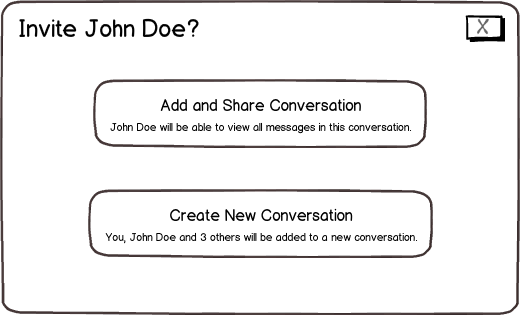 To me, choosing not to share is essentially the same as creating a new conversation with the additional user.

This will communicate to the users exactly what will happen, so the application doesn't make any wrong or dangerous assumptions.

You might consider allowing users to make the conversation "unsharable" by essentially locking the conversation down so new users cannot be added. It seems like this could solve your sensitive data issues. If User A doesn't want to allow User B to add people to their private conversation, they could "Prevent users from sharing this conversation" by clicking some icon or changing a setting. Perhaps it should be private by default.

Alternatively, you could design it to where a user would have to accept each proposed invitee. 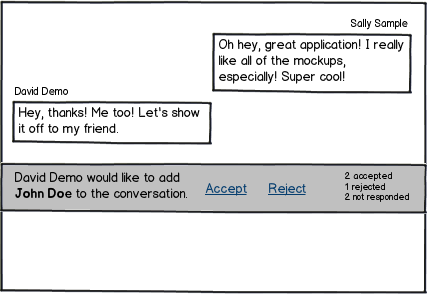 How long have User #1 and #2 known each other? weeks? years? You certainly should not link their entire history with each other to user #3.

User trust is everything. You cannot have any sharing model that allows your "When it would be bad" scenario.

You can go check for yourself but I believe Facebook's model is user #1 and #2 can add user #3 and it creates a separate "group" conversation. To user #1, the chat with user #2 and the group chat will be treated as separate entities entirely.

You should should go experiment with Hangouts, Whatsapp, Snapchat, and the dozens of other chat apps with tens of millions of users to see how they solve these problems.

Not the answer you're looking for? Browse other questions tagged chat messaging or ask your own question.

6
Is it necessary to store chat conversation?
2
Chat Windows Within Web Application - PopUp or Floating Div?
2
Chat sidebar: Allowing users to chat & see who is online with just a follow?
9
Best practice on Web Chat "please wait" messaging
3
New Message Notifications and Unread Message Counts across Clients
5
In what order should chat messages be shown?
1
How to properly handle editing/deleting chat messages?
0
Should there be read receipts in chat applications? What are the pros and cons?
3
What are the most commonly understood signs/icons for chat interactions?